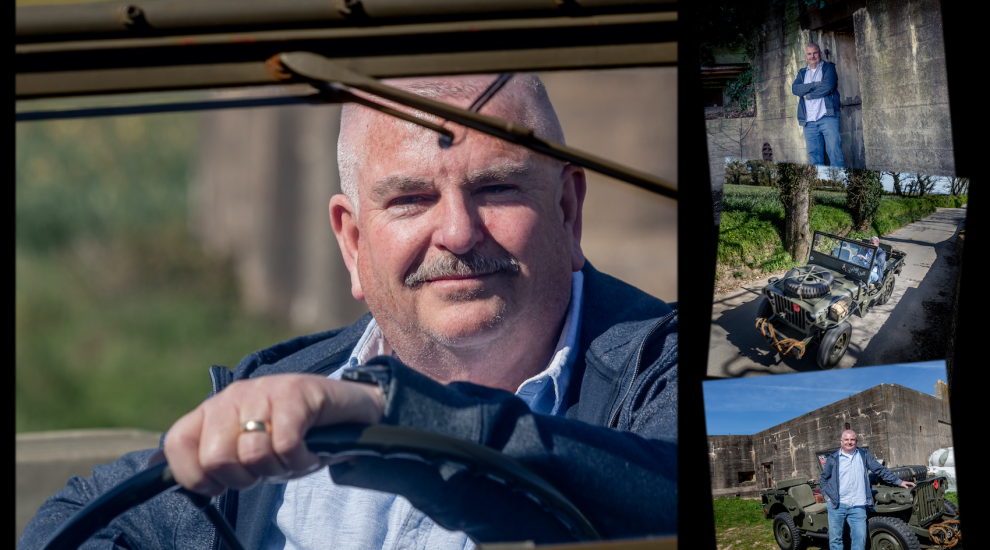 For those lucky enough to turn their hobby or interest into their job, coming into work every day is a bonus - one of those people is the owner of the only full-time gun shop in the Channel Islands.

As part of Jersey’s close-knit shooting community, Newton and Newton's Graeme Delanoe counts his customers as friends. Graeme is also a dedicated supporter of charities that look after our past and present Armed Forces personnel.

As Jersey celebrates the 76th anniversary of Liberation this month, Express went to meet him...

Before lockdown meant many of us would be spending most of the last 12 months working from home, many may have passed Newton and Newton in Colomberie on their walks home from the office. It’s one of those shops that makes you want to cross the road to look in the window, especially if you’ve got kids in tow.

It’s also a hub for the many islanders that enjoy shooting and collecting related items. There is a long history of competitive shooting in Jersey, perhaps because of the Militia traditions. There are the ranges and clubs at Crabbé and Les Landes, and nearly every Parish has a small-bore shooting club. Graeme reckons it has one of the highest number of participants of any sport. 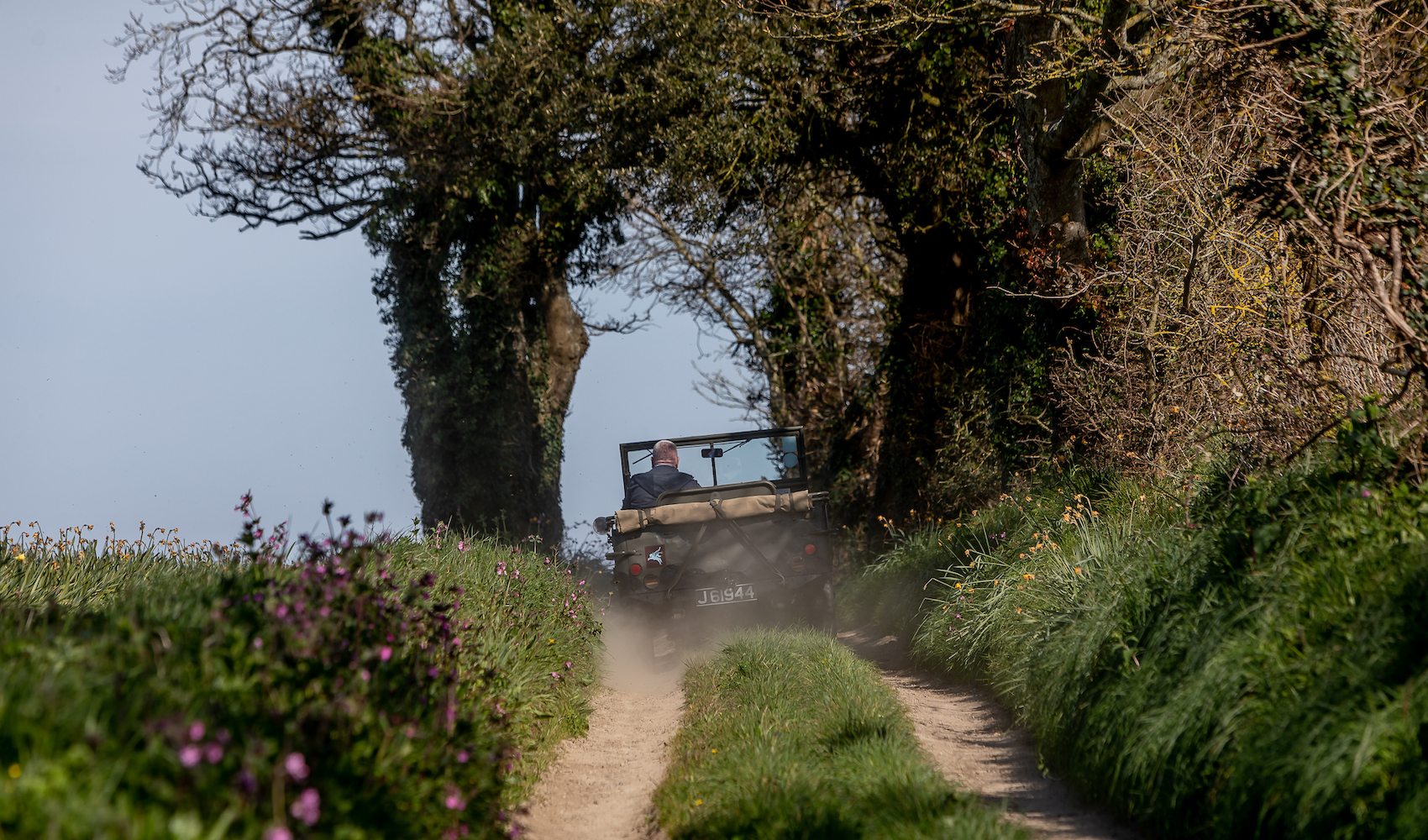 It is legal to own firearms as long as you’ve met all the requirements of the law. Some might regard that law as being more relaxed than in the UK in terms of what you can own and what can be sold, but Graeme says here, it is stricter where it needs to be.

“Because it’s parochial-led, you’ve got a good chance of knowing your authorities, your Constable. In the UK you could be in a town with several hundred thousand people and you would never get to know any of the Parish officials. Over here, everybody knows each other and as a result of that they can look at you, assess you and go from there.”

It is still a lengthy process for those looking to get a firearms licence, from the application process, the checking of references and security. But he says as a result of that, it is a secure and well managed sport.

The shop, which has remained in the same place since it was founded in 1954 by Fred and Les Newton, was originally a photographer’s. It gradually turned into a gun shop as Fred became interested in shooting.

Graeme, who is celebrating his 30th anniversary with the business later this year, bought it from Fred’s son Mark four years ago. Mark had decided it was time for him to retire, but still works one day a week in the shop. 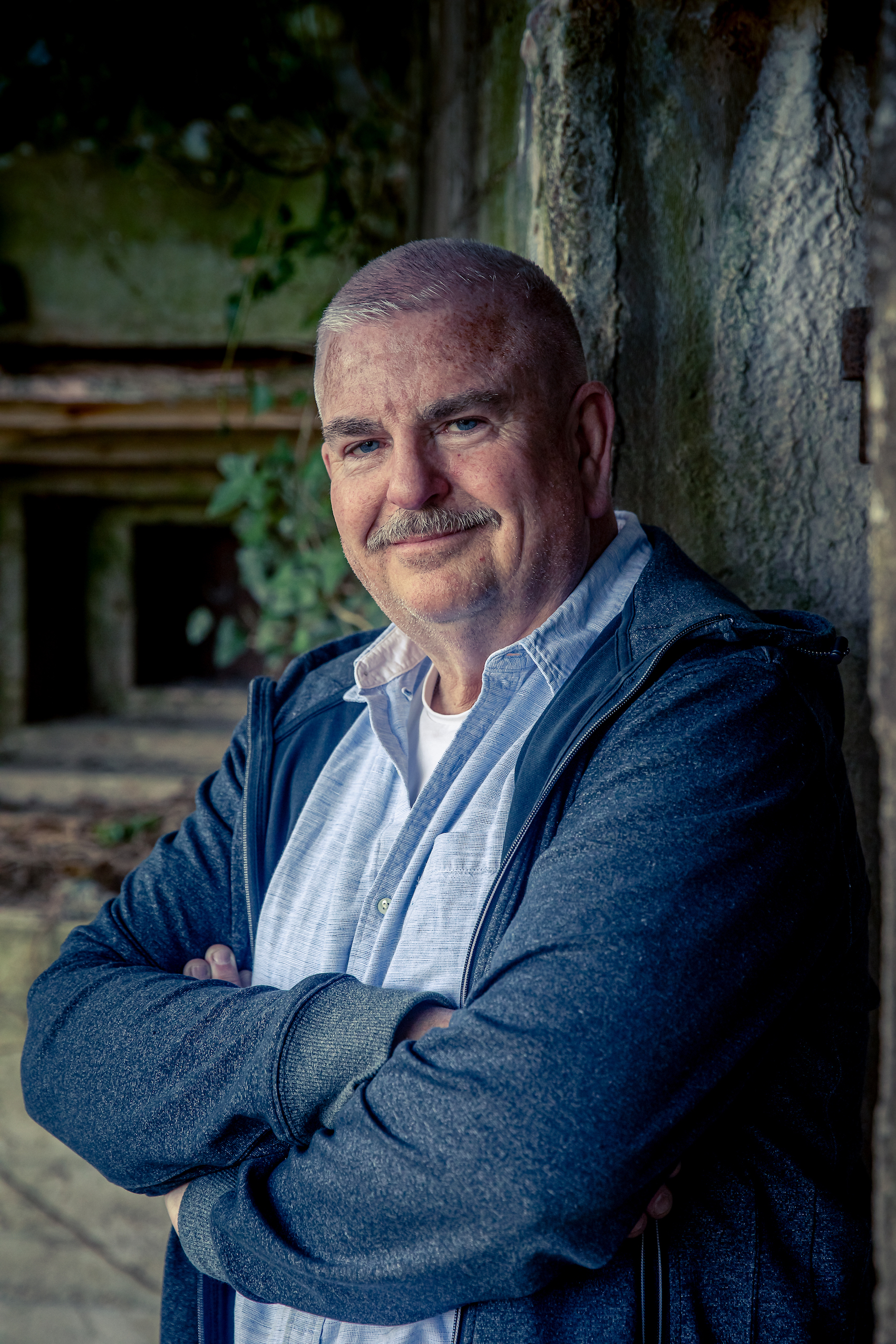 Pictured: Graeme is celebrating his 30th anniversary with the business later this year.

“It was just natural progression that I would take over and the opportunity to purchase the business came along. It was just role reversal; he became the teaboy.”

As a registered firearms dealer, Graeme tends to stick to the local trade rather than looking for stock outside of the island. Red tape has made the movement of certain items into and out of the island more difficult anyway, but there is a business in selling firearms that come into the shop.

“Firearms are always looked after. They don’t wear out and get abused. People do look after them, so you get a good collection of things that come in and there’s always someone on a waiting list for something.” It can be a long wait if you are, for example, collecting something in particular and are not after the range of weapons from different countries and different eras that are on display.

“The beauty of it is when people bring a collection in, because sometimes they’ve got to an age where they are not using them. The biggest thing is when families come along. People who’ve been into shooting and have a collection, they’ve got married and the first child comes along and they’ve decided it’s not staying in the house. We get collections coming in that way. The nice thing about it is that because there are so many types of shooting, many different firearms can be in the collection, such as some really nice classic stuff and some modern AR platforms.” 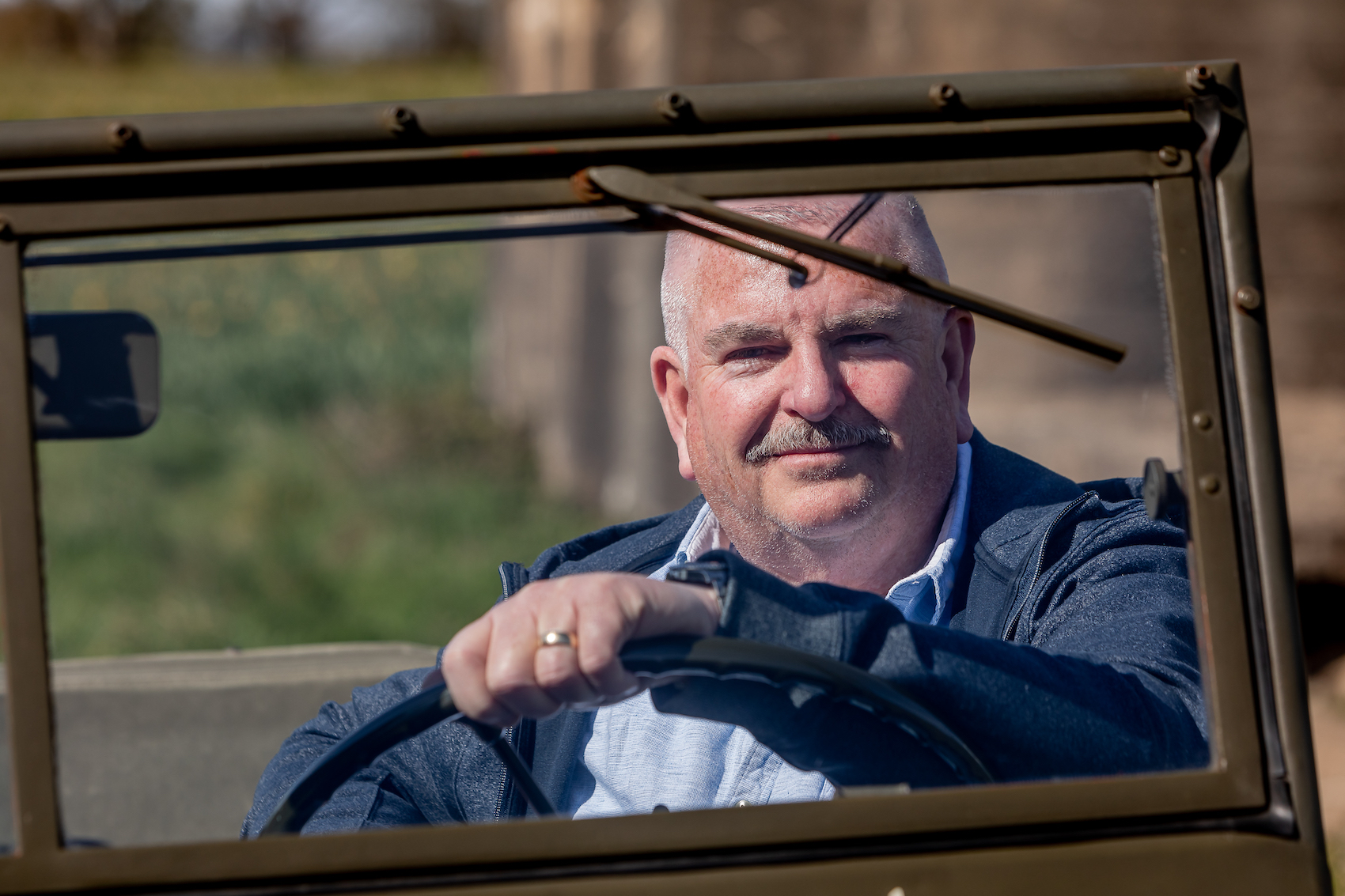 The restrictions over the last year have depressed the market for Graeme to a certain extent. Shooting ranges have only been open to a small amount of people; some, who have been shielding at home, have given the sport a break; and none of the clubs have been taking on new members.

"I’m very lucky with the firearms side because you can’t buy anything like that off the internet, but I do a lot of other bits. I do binoculars, multifunction tools, military surplus, knives, BB guns. All of that can be bought off the internet, and I hate to say this, but town is becoming a no-go zone for a lot of people because it’s quite unfriendly now. It’s not easy to get to town. Parking is hard, roads are closed and it takes a long time to get around everywhere. And in my opinion, the closing of Broad Street is the kiss of death. You need people to move around.”

Graeme’s parents were smallbore shooters in the 1960s, and as a small boy brought up on tales of the Occupation, his interest in bunkers, history and shooting grew.

“I was always interested in the military, and the shooting came about from there. When I got to 21, I had a collection of German equipment and various bits and pieces, and I bought my first live firing rifle, which was a German Mauser, and have not looked back since.” 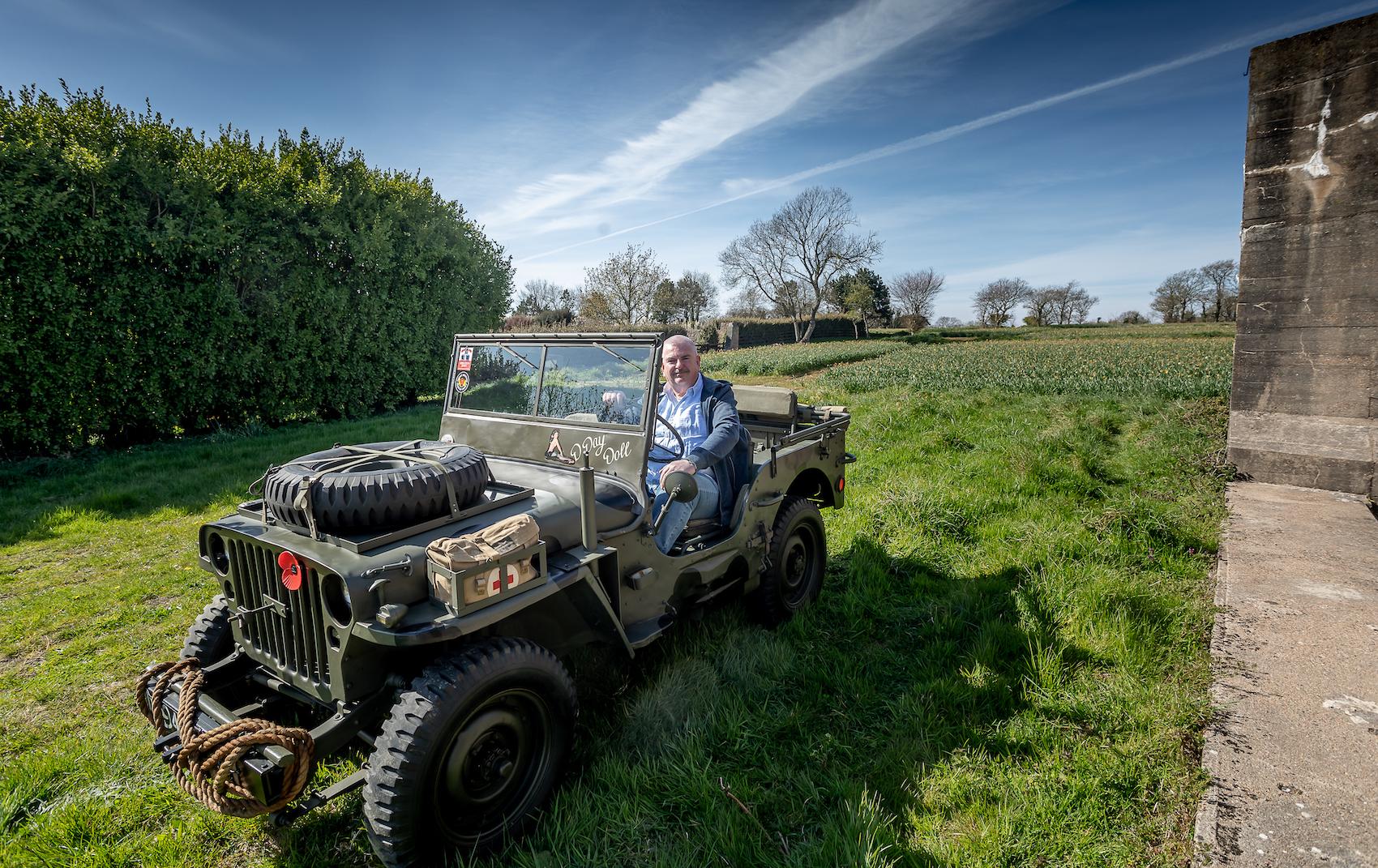 Pictured: Graeme has a penchant for collecting what he describes as "Tupperware for men."

That desire to collect means his collection risks outgrowing his home. He’s getting better these days, and his wife is very understanding but he does have a bit of a problem when it comes to ammo boxes which, he confides, are “Tupperware for men."

"The German MG ammo can, as a kid I’d always wanted one, but could never get one and it’s weird that 40 to 50 years after the Occupation, stuff starts to become more available. And nowadays if I want something I just go on the internet and there it is. I’ve got about 180 of these cans now!”

The collection may have grown but it’s not just German militaria. Graeme has a 1918 Vickers Machine Gun, a Second World War Bren gun and of course his beloved Jeep, D-Day Doll, which was built in 1942.

“It’s the quality. When you think a Vickers came out in the early 20th century, all the factories were turning these things out by hand. I’ve got a Vickers which is 1918 dated which I use on the range. It’s 103 years old and it works perfectly. The mechanical engineering is incredible and what I like is you get the platoon box with the spares, you get all the other accessories – dials, sights, tripods, transit boxes – and I like to get a collection of all the bits and pieces that go with it.”

I’m probably like many others who drift in to Newton and Newton to have a chat or to pick up the Royal British Legion Poppy Pins in the run up to Remembrance Sunday; but in a former role as a volunteer instructor for one of the island's military cadet units I would seek Graeme’s knowledge and expertise. He would often help us out with items we were short of for the re-enactment on Liberation Day. That period of history has a personal significance. Graeme’s family were either here during the Occupation, or fighting with the Allies.

Posted by Scott Mills on May 31st, 2021
Top guy, and he's right with Broad street, can't believe I saw a bus driving past the Pomme D'oR going the (old) wrong way, when did that happen. There will be a crash there soon!!!
To place a comment please login Login »