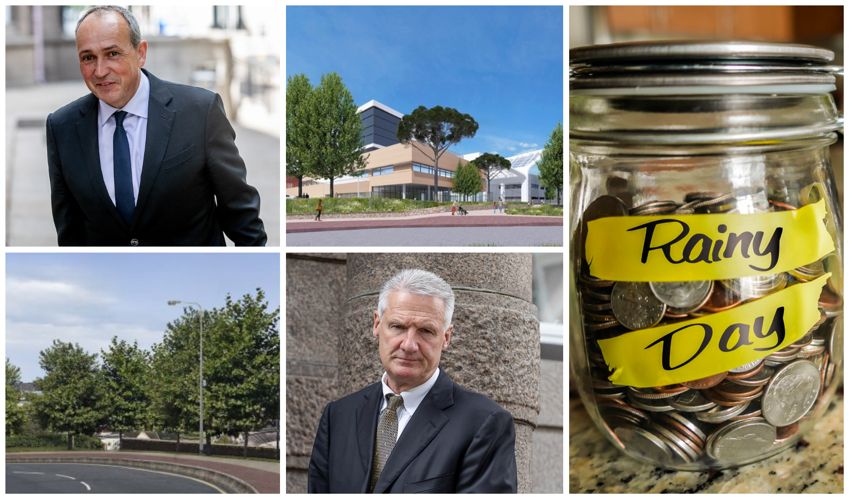 The Treasury has moved to reassure islanders over the long-term strength of the rainy-day fund following news that it could lose £15m this year.

Last week, Infrastructure Minister Tom Binet said that rising inflation, market volatility and an impending recession meant that the £1 billon Strategic Reserve would not get the investment return required to repay the £756m debt that the States Assembly agreed to take out to pay for the £804.5m Our Hospital project.

Last October, when approving the funding, the States were told that by adding a lot more borrowed money to the £1 billion reserve, therefore increasing its value by 70%, the return from investing that reserve would be more than the interest payable on the debt.

Not only that but they were told the reserve would also grow enough to repay the capital at the end of the two bonds’ 30- and 40-year terms.

The then Chief Minister John Le Fondré said at the time, that Jersey would be “effectively getting a new Hospital for free."

That all changed last week. Infrastructure Minister Tom Binet said that the Strategic Reserve could lose £15m this year, making those earlier assumptions – made less than 12 months ago – redundant.

He added that the 2% bond interest rate quoted last year was also old news, with borrowing rates now running at between 3 and 3.5%, and likely to rise further.

He said: “This puts us in a position where, even if we wanted to proceed with the current plans as currently proposed, we cannot. The cap of £804m has already been exceeded. This situation has been confirmed unanimously by the Council of Ministers.”

Speaking to Express, he added: “About a month ago, the Bank of England predicted that the recession will be much deeper than they had previously thought. It looks grim in the short to medium term.

“We are no longer in the situation where the strategic reserve is likely to achieve a consistent 4.5% return and with bonds rising to 4.5%, we’re now looking at paying £70m-£75m in year one alone.

“Leaving aside the Strategic Reserve, we have inflation at 10-11% this year, and that’s not going anywhere soon; that’s 30% inflation over the next three years.

“It is a toxic combination and I think you’d have to be slightly unhinged to continue with this project as it stands.

“If you owned your own home and business, you wouldn’t take that sort of risk, and neither should we.”

However, in a statement, the Treasury and Exchequer department said that the long-term forecast for the Strategic Reserve was still positive.

“2022 is proving to be a challenging year for investors with significant financial market volatility,” it said.

“Short-term volatility in investment returns is to be expected but the long-term investment horizon under which the States reserves are managed enables assets to be held through periods of uncertainty to extract value over a full market cycle.

“Given the current global headwinds, returns are likely to exhibit increased levels of volatility in the short to medium term. However, strategic investment decisions are made over a longer time horizon, and we remain confident that the States Funds’ Investment Strategies remain well placed to meet their objectives.”

Former Our Hospital project head Deputy Lyndon Farnham said that the Strategic Reserve fluctuated by millions of pounds every day as markets rose and fell, and the island could still afford the £804.5m project.

“The funding model works up to borrowing at 4%, and we are not there yet, so to say we can’t afford it is, I’m afraid, a lie,” he said.

“If the project had not been held up last year by its opponents, we could have got a 2% bond in the fourth quarter or the first quarter of this year.

“The whole game plan was simply for Deputy Kristina Moore to become Chief Minister and stop the project, but I will do everything in my power to keep it on track.

“I respect Deputy Binet as a successful farmer and businessman, but he doesn’t know what he is talking about. And he does not know anything about politics.

“We can afford to spend £1 billion a year to run the island. Over the next 40 years, we will be spending £15m-£20m a year on a hospital that will deliver a health care service that islanders need and deserve.

“£800m is a capital investment which, as a percentage of total overall government expenditure over the next 40 years is a tiny fraction.

“We have a history of trying to do things on the cheap – look at our roads and the current state of Fort Regent – and here we have a really good hospital that we can afford.

“We just need to prioritise money in the right way.”

Deputy Farnham added that opting for a dual-site would require a fresh planning process which he believed would take three years.

Posted by IanSmith97 on Sep 6th, 2022
Deputy Farnham is bang on. Some malcontents (who are in the Jersey tradition experts on everything) have ran a very effective campaign to stop the hospital being built at Overdale. I suspect it could have been built for less than £804 million but the £804 million is the stick to beat the project with but I suspect the cost is not the only reason. They just don’t want it at Overdale. If not at Overdale then pray tell us where?
Posted by john garner on Sep 6th, 2022
Is it a £15 million loss in the strategic reserve or £150 million .???.....with markets off 15% and bonds being hammered it is more likely to be £150 million down
Posted by Keith Marsh on Sep 6th, 2022
There is no doubt that borrowing rates are increasing, however with Jersey's Official Rating it would still be able to get a great deal on two bonds required to pay for the new hospital.
Regretfully, the news that the New Overdale Hospital will not be built is Political.
Our new Chief Minister and Deputy Binet were ALWAYS AGAINST the project.
Now the people of Jersey, yet again, have to wait and see what this group is going to do, one thing is sure 2026 is off the cards.
To place a comment please login Login »