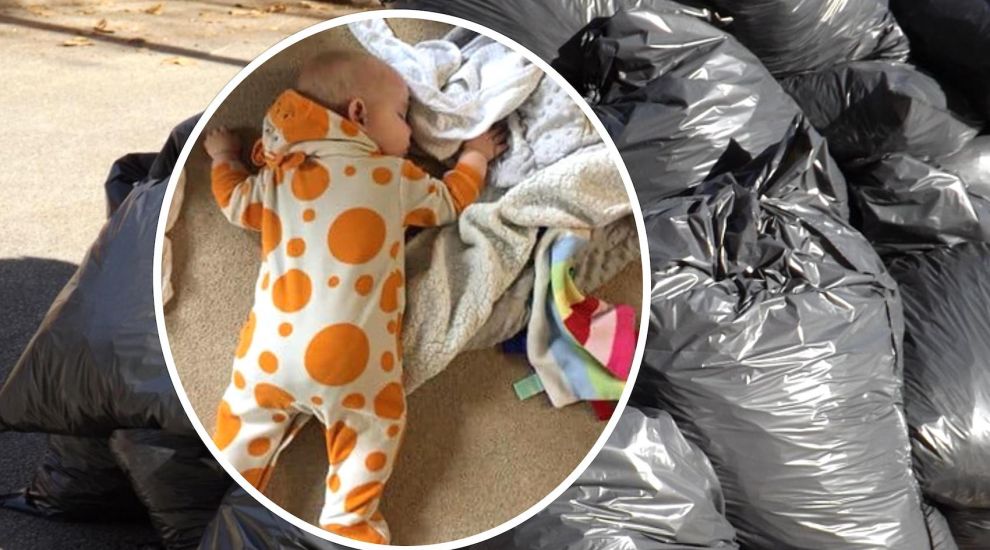 A mum, who was left heartbroken after accidentally throwing away a sentimental babygrow, has praised the team that went “above and beyond” to help her recover it from a “mountain” of binbags.

After having her sixth baby last year, Sebastian, islander Julie Pirouet was preparing to part with her collection of baby items, and had been making weekly drop-offs at reuse centre Acorn.

But not everything was intended to be given away. Some items had been earmarked to form part of a memory blanket – a special “patchwork quilt made from the favourite pieces of baby clothes or ones that evoke memories”.

“Given half the chance I would keep everything, but with six children I’m keeping a fair bit anyway. At the moment I can’t find anyone locally to make them, though, so I’m in contact with someone in Guernsey. Alternatively, I may make them myself,” she explained of the sentimental project.

Among the items Julie had earmarked was a tiny white and orange giraffe-themed babygrow with a pattern mimicking a giraffe – but disaster struck last weekend, when she realised she had accidentally given it away.

While at first she thought it “no big deal”, feelings of regret soon kicked in – “sentimental hormonal mummy wanted to find that outfit after all,” she admitted.

On a whim, she messaged Acorn’s Facebook page late at night to ask if they’d spotted it – even offering to buy it back – and was invited to come up and take a look for it the next day.

It was “a bit of a long shot,” Manager Steve Pearce warned Julie, and she too said she “hadn’t held out much hope” – a feeling compounded by the sight of a “mountain of bin bags" when she arrived.

Against the odds, however, the babygrow was rescued in just five minutes.

“[I] spotted a patterned blanket hanging out of one about halfway up. Steve kindly grabbed that bag and a couple next to it and the leg of the giraffe babygrow was there hanging out,” she told Express.

“I was overjoyed to have it and almost cried. I had to sit in the car and calm down a little before driving home. I’d almost not gone, as I felt really silly making such a fuss over it.

“I can’t thank Steve enough. Acorn is an amazing charity and venture.”

She further shared her thanks in a Facebook post on parenting forum Kids' Rock (Jersey), which has since received nearly 250 likes.

"We all know that feeling when you realise you’ve lost something and your heart just drops, so I’m glad to have been able to help,” Steve said.

“It’s always very busy in our sorting area and on other days it might have been much harder to find, but it’s back where it belongs, so a happy story after all.”