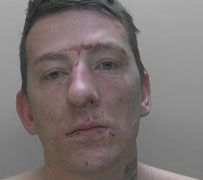 A 25-year-old drug addict, who admitted a "serious and sustained" assault which left the victim with over 30 bruises and abrasions, avoided jail in order to care for her terminally ill father. Meanwhile her co-accused in the grave and criminal assault, Ricky Bree (pictured), was sentenced to four years and nine months in prison.

The Royal Court yesterday heard Amy Binnie even tried to eat around £90 worth of cannabis in front of police officers after they found the drugs in her purse. As well as committing a grave and criminal assault, Binnie also spat in the faces of two police officers when they tried to put her in a cell.

The Royal Court yesterday heard Bree took the central part in the assault which left the victim with 30 bruises and abrasions to all parts of his body following the attack in March.

Bree, 36, faced a total of six charges after he was found guilty earlier this year of a grave and criminal assault, larceny and resisting arrest.

He also admitted a further charge of grave and criminal assault and two counts of using threatening and abusive language.

Bree had an “extensive criminal record” according the Crown Advocate Matthew Maletroit, who told the court he had 94 previous offences.

Advocate Maletroit said: “CCTV footage from Snow Hill car park shows the victim entering the car park. It appears that words were exchanged between the parties and Bree’s body language was threatening.

“The victim reacted by throwing punches at Bree and it is unclear whether the punches connected. The victim began walking away in the direction of Green Street.

“Binnie was present and 'giving verbal' to the victim. She also delivered a punch to the victim’s face. The victim was not fighting back. He ran down Green Street towards Panama Apartments with Bree shouting ‘I’m going to kill you.’

“Bree and Binnie then assaulted the victim as he lay on the ground. Both kicked the victim at least three times. Police officers arrived moments later and one saw Bree kick the victim to the head. He described the kick as a football kick. Before Bree ran off he saw him stamp on the victim’s head.”

Bree attempted to flee, but was caught by officers and both he and Binnie continued to struggle and threaten the police while being arrested.

Advocate Maletroit said: “Bree was shouting that he had AIDS and was attempting to spit at the officers.

“Police officers recovered the victim’s mobile phone from the ground where Bree was restrained. Bree had stolen it from the victim.”

Binnie, who had 4.83g of cannabis in her purse, was angry and aggressive at the police station after her arrest.

As well as trying to eat the cannabis when it was found in her possession, in a fit of rage she also spat, with the saliva landing in the faces of two officers.

The victim, Mr Nuttall, was examined and found to have more than 30 injuries to his limbs, hands, back, chest, face and scalp. Advocate Maletroit said it was "remarkable that he was not more seriously injured, other than bruises and abrasions."

Bree also admitted two counts of threatening and abusive behaviour after he became “angry and frustrated” during a visit to the social services department in July last year. Then in November last year he admitted another assault, this time on David Proctor, in Wharf Street.

Bree told the victim he “had a blade” and tried to land two punches on Mr Proctor.

Binnie also admitted the theft of a handbag worth £18.99 from New Look in July.

Defending Advocate Jeremy Heywood, for Bree, said the defendant “had not had the easiest of lives, although he accepts much of that is of his own making.”

Advocate Heywood said: “There are now reasons for optimism. He is no longer using illegal drugs which is of great significance to his life. He has re-established contact with his two children. He has the motivation and desire to try to improve his life and to stay out of trouble. The road to reform is a long one particularly when you have an addiction like his. It is encouraging that he is trying to change himself for the better. He is approaching his life now with a new maturity.”

Defending Advocate Lee Ingram, for Binnie, said the defendant was an “impressionable and vulnerable young woman.”

Advocate Ingram told the court Binnie, who has an addiction to methadone, has recently been caring for her terminally ill father.

He said: “An immediate custodial sentence means she will be incarcerated for her father’s final weeks. I respectfully ask the court to take the exceptional step of imposing a suspended sentence of whatever length the court deems appropriate.

Commissioner Sir Michael Birt told Binnie two of the six Jurats who presided over her sentence felt she should have been immediately jailed and that she was "very fortunate."

He added: "It is purely on mercy that they are willing to suspend this sentence.

"Four Jurats do see this as an exceptional case and the main reason is that you are looking after your father on a full time basis in his final days. For you to be incarcerated for the final period of his life would be penalising him as well as you. This decision would not be taken as any form of precedent. You have been very fortunate."

Sir Michael Birt told Bree: "You have an appalling criminal record including previous assaults and numerous offences of dishonesty. There is no alternative other than prison for these current offences."

The Attorney General's office today issued a statement, which reads: "The Law Officers’ Department thanks the witnesses who gave evidence at Mr Bree’s trial. We rely on members of the public to report crime and to support prosecutions by giving evidence. They play a central role in the criminal justice process to ensure that justice is done.”

Posted by June OKeeffe on Nov 9th, 2016
right so, where do they get the money for the drugs? why should she get off with it to look after her poor father, that's a bad excuse really, funny how they all feel shame when it goes to Court. kicking head? disgusting
To place a comment please login Login »