More online purchases could be subject to GST in the future in a drive to save bricks-and-mortar shopping, the Treasury Minister has revealed, amid claims from local retailers of an "uneven playing field."

Deputy Susie Pinel, the Minister for Treasury and Resources, told the States Assembly today that her department is looking into reducing the current ‘de minimis’ exemption clause, which sees the 5% local sales tax only imposed on imported goods over £240 and therefore makes online purchases below that level cheaper.

High street shop owners and Sandpiper have been pushing for all goods bought online to include GST with the backing of the island’s largest business lobby group, the Chamber of Commerce. They say that it is “flawed and unfair” and creates an “uneven playing field” for them at a time where town shops are emptying at an unprecedented rate.

In a States Assembly meeting this morning, Deputy Steve Ahier asked the Treasury Minister if she would consider removing the 'de minimis’ clause. Deputy Pinel replied: "We are looking at it at the moment with a view of reducing it." She added that the full details will be included in the 2019 Budget, to be presented in December. 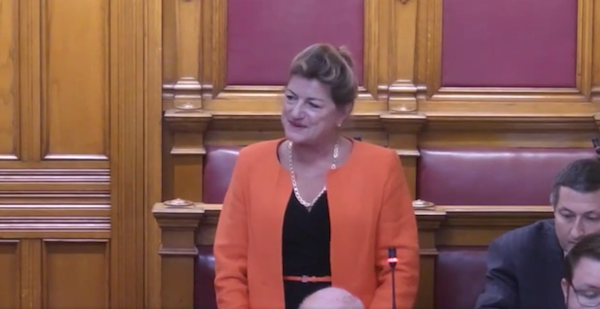 Pictured: Deputy Susie Pinel said more details about GST on online-bought goods will be revealed in the budget.

Senator Sarah Ferguson asked her if she would be open to negotiating with Amazon to ask them to charge the 5% as part of the original payment. Again, Deputy Pinel said her department was examining the possibility. However, she added that they were also considering other cases abroad where Amazon has been asked to pick up the cost of VAT.

She told the Assembly: "This is exactly what happened in Australia. Amazon was asked to be pick up the cost of the introduction of goods in Australia and reduced their services considerably as to what they would transport into Australia.

"We have to be very aware of this and the reduction of services that may happen to us were we to introduce the fact that they would collect tax."

For some, removing the GST clause will not be enough to save local shops. Carl Walker, the Chairman of the Consumer Council said that other options should be looked at as sky-high rents and parking issues also play a part.

He told Express: "For example, for people buying small items for £2, the administrative costs and the process involved in claiming that GST is going to far outweigh any benefit. How much is it going to cost the taxpayer to recoup that 10p? If the objective is to make pricing more competitive, I am not sure it will work."

Posted by Jackie Priest on Sep 26th, 2018
What about companies like B&Q who do not remove VAT from the cost of their products. The cost of an item on sale locally is the same as the cost on line. How come this is allowed?
Posted by Jon Jon on Sep 26th, 2018
That won’t stop people buying offline,goods will still be cheape,plus no hassle crawling around town in traffic,some poor customer service in some shops.
Posted by jean Felton on Sep 26th, 2018
If local businesses actually deducted the VAT as they used too, more people would shop locally.
Posted by Stuart Wilson on Sep 26th, 2018
I wanted a new pair of head phone last week, local retailer in St Helier £137.99, Amazon £89.00 delivered Jsy without VAT £74.16 even if GST were to be added £77.87. Its not just GST that’s causing people to shop online local retailers cannot compete on price alone. Like Mike Ashley and House of Fraser perhaps the Minister should be looking a the rents charged by landlords for local shops to help reduce their overheads. I wonder what research she done?
To place a comment please login Login »