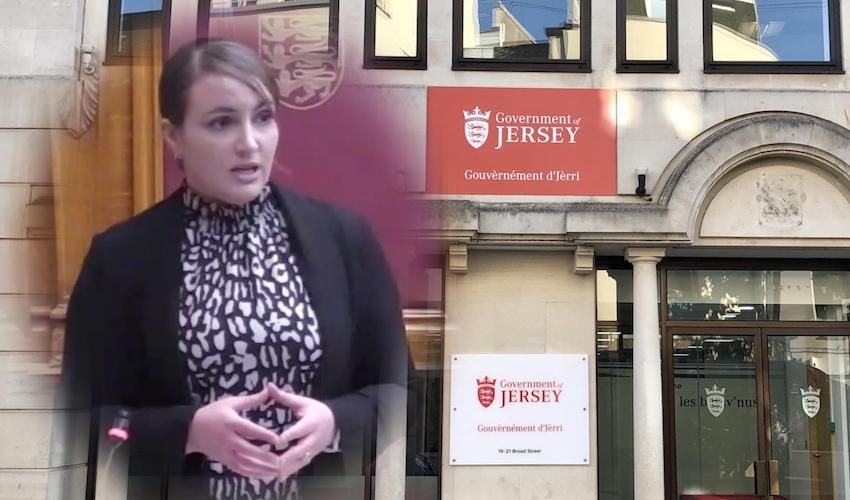 The Education Minister has voiced opposition to the government’s £100m savings and restructuring programmes, criticising them for causing “concern” and “uncertainty”.

Senator Tracey Vallois expressed her “dissent” as she was asked for an overview of the current Education budget by Deputy Geoff Southern during yesterday’s States Assembly meeting.

He also asked for her assessment of the impact of the ‘Target Operating Model’ – a term referring to the proposed new headcount and management structure in the department – on Education staff. 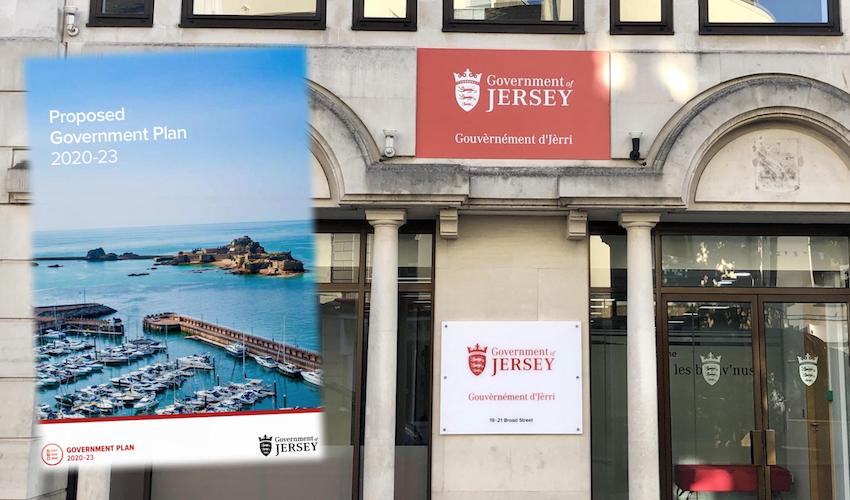 Pictured: The Government Plan is underpinned by £100m of savings over four years.

“The overall budget with Education is that at this point in time we’re overspending this year because of the needs and requirements that are needed in school,” the Minister said of her department, which is currently expected to overspend by £2.2million.

She continued: “In terms of the Target Operating Model, I think it’s causing a great deal of concern, uncertainty and a huge amount of problems in not just how the model is proposed to be changed, but I’ve also made my views clear particularly around the efficiencies discussions that at this present time that I have dissented because the model that is being put in place in terms of [States Employment Board] and the unions discussing efficiencies as well – I do not have any concrete clarification or feel that I can be assured that there will not be any duplication.

“So at this point in time I’m unable to support the central efficiencies because we’re in a current state of flux in terms of our budget in Education and also we’re carrying out a school funding review.”

Senator Vallois was the second Minister to publicly voice concern over the four-year Efficiencies Programme, which is aimed at avoiding hiking taxes as the government embarks on an ambitious programme of investment into schools, homes and other vital infrastructure laid out in the Government Plan. 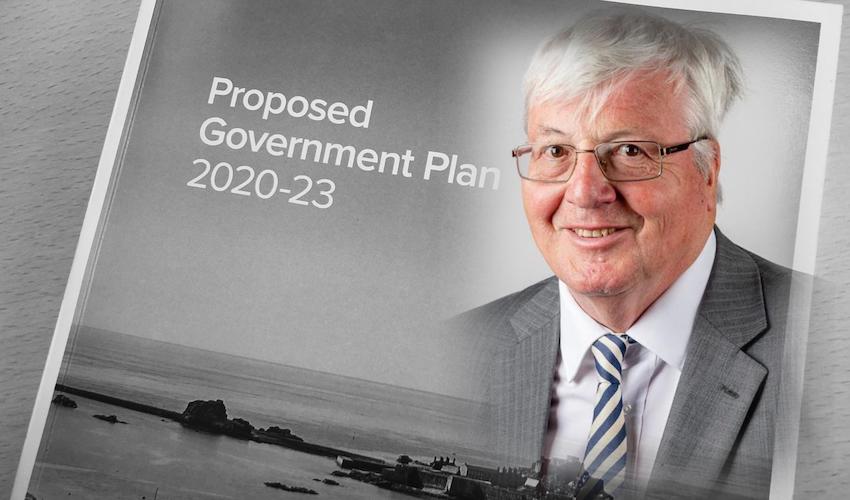 Speaking at the launch of the Plan, Environment Minister Deputy John Young told Express that he was “not confident” that the planned savings underpinning the proposals would be fully achievable.

Fuelling fears that the Government Plan could unravel, Senator Vallois’ comments came in a week that independent economists warned about the risk of using “large and uncertain” savings.

In a report released this week, the Fiscal Policy Panel stated: “If these gains prove harder to realise or take longer to implement, this would put pressure on the public finances, but also present a risk in displacing the funding for government priorities. With a weaker economic outlook, it would, all else equal, be appropriate to run smaller surpluses than those in the Plan. However, it will be important to distinguish between any cyclical adjustment to spending priorities as compared with simply making smaller efficiency gains. Efficiencies should always be pursued as a structural improvement to public finances.”

The Panel added that they expected savings to become “increasingly more difficult to secure” with time, and that only a “strong political commitment” would “ensure they are delivered.” 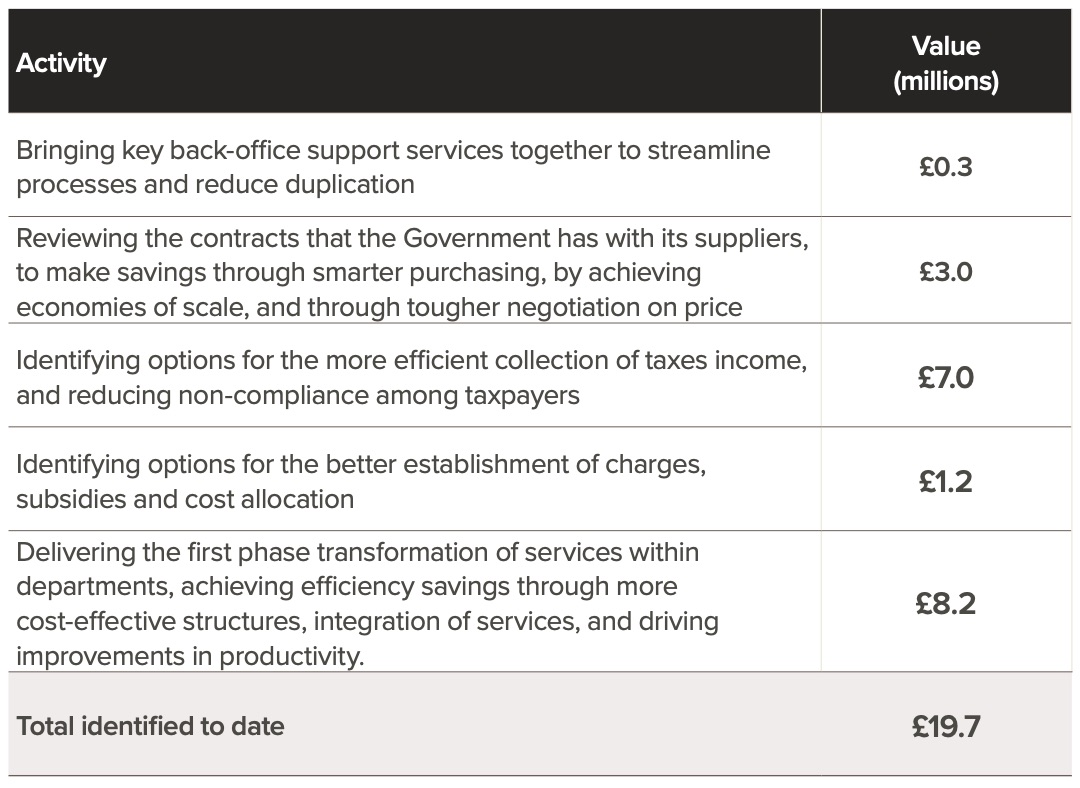 Pictured: The efficiencies identified by the government so far.

The report continued: “If these gains are not delivered this would present a structural deterioration in the budget balance that might need to be addressed by revenue or expenditure measures.

“The Government Plan includes an ambitious programme of investment with a sustained high level of capital expenditure throughout 2020-23. However, past experience demonstrates that it has been very difficult to deliver large capital programmes as intended. The improved approach to capital allocation is welcome, but there is a risk that it will not by itself deliver the significant improvement in delivery that is required in the Government Plan.”

It remains unclear exactly how the £100m savings will be achieved, with little detail provided in the Government Plan – something that has attracted criticism from backbenchers and Scrutiny Panel members.

However, States Members yesterday voted in favour of proposals by Deputy Kirsten Morel to ensure the government publishes a more detailed account of the proposed savings at least four weeks in advance of the Government Plan being debated.

The #StatesAssembly has voted to ADOPT Deputy @KirstenJersey’s proposition. He wants final plans for efficiency savings in 2020 to be published at least 4 weeks before the start of the debate of the @GovJersey Plan. RESULT: 41 FOR vs 0 AGAINST