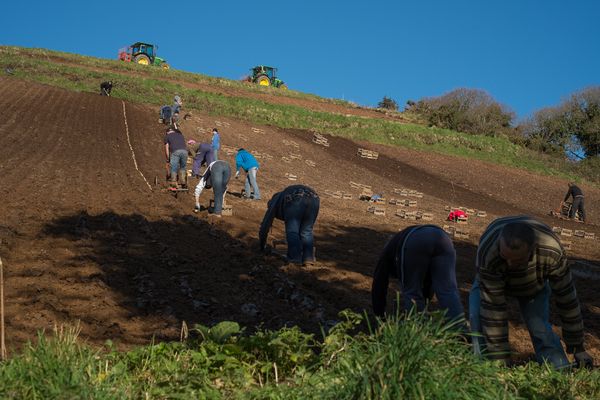 Development plans for the green zone will be blocked by the Environment Minister, who has unveiled plans to strengthen countryside protection and return old greenhouses to agricultural use in a major speech this morning.

Deputy Steve Luce used his speech at the Jersey Farming Conference to flag even stronger rules against development in the green zone, and to hint that action is coming on redundant glasshouse sites that owners have been hoping to turn into lucrative housing developments.

The conference has been organised by the Environment and Economic Development departments, to get the farming community together and to invite visiting experts over to speak to the industry.

And Deputy Luce’s speech made it clear that he sees a future for the farming industry.

He said: “The Green Zone is precious and once land gets development permission it very rarely goes back the other way.

“I want to strengthen even further the application of planning policy that says ‘there will be a presumption against building and development in the Green Zone etc’.

“Recently we’ve done better - more planning applications are being challenged and our countryside is being protected in the Green Zone, but we mustn’t let up.”

In the speech, the minister also said that he wants all buildings to be used, not left empty – including sheds, barns and shops. And he dropped a hint that if that meant the land had to be converted for housing, that could be considered – even if that challenged the Planning rules set out in the Island Plan.

He said: “I want to say that we need to use all our buildings (wherever they are in Jersey) for useful purposes, and not have houses, sheds, barns, or shops empty. I want to make sure that our Employment Land policy is applied sensibly.

“It is designed to make sure that we have a sufficient stock of land and buildings that are available to support economic activity in the countryside. But it needs to be applied appropriately and this should not mean that structures remain empty and unused when, by changing use where appropriate, they could be taking the pressure off the Green Zone.

“I want to ensure that we optimize the use of all our assets even where that means, in some cases, they come out of the use for which they were originally granted permission for.

Many of you will be aware that, some months back, I announced a "greenhouse initiative". “Work has started and we’ve identified a number of derelict sites that were built before any Planning Laws were in place.

“There’s more to do, so watch this space.  Hopefully those particular greenhouse owners will know that I mean to deliver, but, at the same time, there’s something in it for them. If we can get an environmental benefit for the Island, maybe return some land to agriculture and find a way to help the landowners, then it will be a worthwhile exercise.”