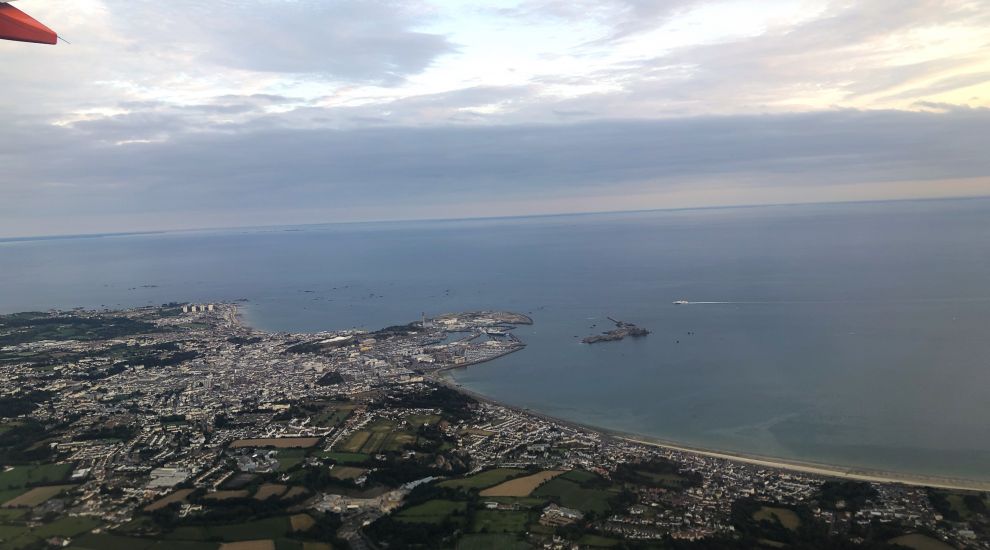 Islanders could have to pay a ‘holiday tax’ when they travel away from the island in future to generate money to combat the effects of climate change locally.

Ministers are planning to launch a review into whether what they describe as a “very modest travel duty…to signal the impact of carbon-based off-island travel and revenue will be hypothecated into the Climate Emergency Fund and Government finances reinvested in carbon-reduction polices.”

A Government spokesperson was unable to explain what form such a duty would take, but told Express that work to examine and review how the idea will begin next year. This will be undertaken internally, and involve looking at “lessons learnt in other jurisdictions.”

The assessment will take into account that “some off-island travel” is needed to support the economy, they said.

The spokesperson also said that, “as with all policy development, it will be carried out in discussion with key stakeholders and the community” and that the “social, economic and environmental impacts of any proposals” will be taken into account.

The States Assembly will have the final say on any new charges before they are implemented.

The travel duty proposal was outlined in the recently-released Government Plan 2022-2025, which sets out planned Government spending over the next four years and general ambitions.

The Plan detailed travel duty as just one of a number of “environmental economic instruments (charges, taxes or fiscal levers)” likely to be used to address the “significant macroeconomic challenge” in Jersey becoming carbon neutral by 2030.

Road user charges are also on the agenda “to replace revenue lost from future diminishing returns from fuel impot duty as the fleet moves away from internal combustion engines” as well as a “strategic review” of the car parking system and its associated charges.

“A package of proposals will be bought forward in the context of underpinning sustainable transport options to encourage behaviour change,” the Government Plan explains.

“This will move the island away from a culture of commuter single-car occupancy, to support the reduction of transport related emissions, towards a “polluter pays” policy outcome.”

Ministers are also planning to reinvestigate solid waste charges as a way of “fairly” charging commercial users for the waste they create, “to raise revenue to maintain and invest in infrastructure”, while also driving “behaviour change that minimises waste generation and increases recycling.”

Other types of waste charges (inert waste, household solids and liquid waste, for example) and carbon tax won’t be considered, however.

Such waste charges were deemed “unsophisticated” and “inappropriate” by Ministers due to the burden they would place on domestic households.

Carbon tax was discounted, as “due to its application to (home) heating oil, this was considered likely to be too untargeted and potentially regressive”.

Jersey’s Climate Change Assembly – a randomly selected group of citizens tasked with coming up with recommendations on how the island should work towards carbon neutrality – said that the Government should encourage islanders to “reduce the number of personal air travel trips targeting frequent flyers using a quota system that gets more expensive the more you do it.”

A brief look at aviation taxation in other jurisdictions…

Results of a survey of 28,000 people across the EU and Britain published in 2020 indicated widespread support for carbon tax on flights (72%).

Air Passenger Duty is an excise duty charged on the carriage of passengers flying from a UK or Isle of Man airport on an aircraft with more than 20 seats. It takes distance into account, making long distance flying more expensive.

Air Departure Tax in Scotland is a pending tax to replace the UK-wide Air Passenger Duty. The Scottish Government intended to reduce the rate by 50% and eventually abolish it, but decided in 2019 that such a move would not be compatible with its climate change targets.

Amid a push to reduce carbon emissions by 40% by 2030, France is currently exploring an eco-tax on airlines taking off from a Franch airport, which is expected to raise around €180m.

Switzerland was on track to introduce an environmental levy of 30 to 120 Swiss francs per airline ticket depending on distance and travel class, with around half of proceeds going into climate initiatives. However, a June 2021 referendum saw 52% of voters reject new CO2 laws, including the aviation tax.

Posted by John Henwood on Sep 29th, 2021
Dear Government, don't be so silly. Engage brain and think it through before making silly statements about a tax which will penalise anyone who travels off Island. How would you differentiate between business and leisure travellers? Or are you prepared to risk further diminishing business travel? How would you identify visitors returning home? Or are you going to tax holidaymakers and thus deterring them from coming here? In if you're prepared to take those risks, think about how you'd administer it. The cost would likely outweigh any 'green' contribution. Please Government get back to your knitting, by which I mean the important stuff, like education, health, safety and welfare and stop wasting time fiddling around with daft ideas.
Posted by IanSmith97 on Sep 29th, 2021
And so the picking of our pockets in the name of the green/environment scam starts in earnest. To be followed by road pricing. This nonsense has to stop. Who thinks up this? Activists who sit on “citizens panels”? No matter what we do our “green” initiatives AKA economic suicide will have no effect whatsoever on global warming. That being the case, why are we continuing on this tax this, tax that, ban this, ban that in the name of environmentalism? I know why, it is so some of the activists can feel good, convincing themselves that what has been done here is having an effect. It is not and never will. We are a population of 110,000 out of a world population of 6 BILLION. So we continue the farce of picking the population’s pockets for no good reason. Unbelievable.
Posted by L Brindle on Sep 29th, 2021
How about examining the way the authorities fritter away tax money with little or no accountability? Perhaps, just perhaps, imposing other charges, taxes, or fiscal leverage won't be required. It's already very expensive to get on and off the island, and, as ever, it'll be the average working person who suffers. Get your ear closer to the ground, and maybe pay attention to the electorate, because it's them who put you where you are at 50k p.a. plus extras.
Posted by gordon le claire on Sep 29th, 2021
yet another not to re-elect the so called government my gran could run the island better and she is in her 90s
Posted by Jon Jon on Sep 29th, 2021
Roll on next years election, this Island can save money galore by cutting down the amount of members in the States plus their freebies. As for all this greenies ,take note when weather really changes ,they are off their bikes in their cars! Greenies who complain about environment yet live in houses supplied by electric or gas, have all mod cons, travel away on holidays etc.All this environmental crap drives me up the wall,Jersey the size of a pin head ,unknown in most countries,Its a joke this Island now!
Posted by nigel pearce on Sep 29th, 2021
Don’ forget the worst polluter idea to make cars drive at 20mph.
How about cutting unnecessary States (I hate the change of name which must have cost) spending and maybe even reducing taxes instead of seeking out ideas for new additional taxes.
Posted by Wilfred Gavey on Sep 30th, 2021
At least the Swiss listen to their electorate.Our lot should try it sometime.
To place a comment please login Login »