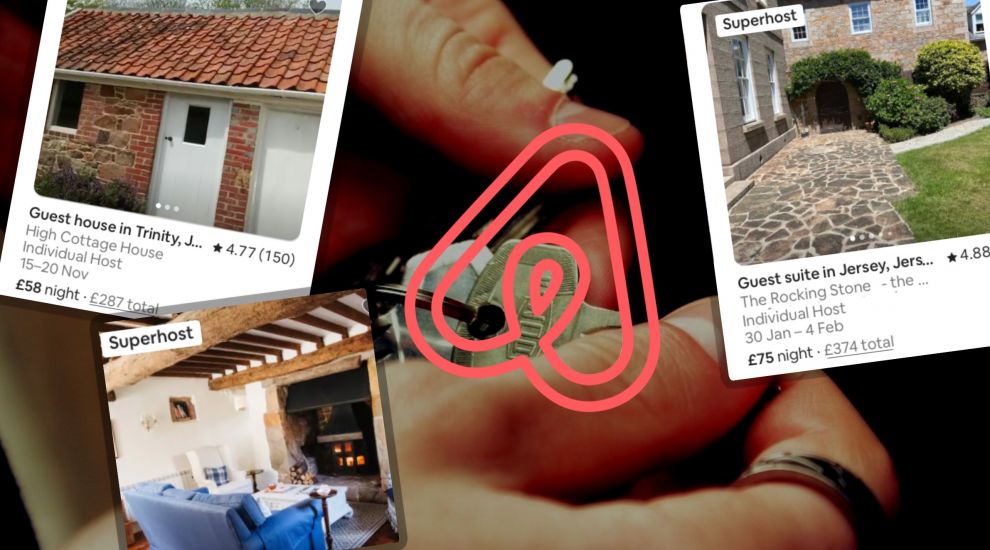 Islanders are generating up to £400 per night by offering up their homes on holiday rentals platform AirBnb... But they could soon face a clampdown as part of moves to help combat the island's housing crisis.

Housing Minister David Warr said that at least 130 'whole homes' – as opposed to single rooms – had been identified by officers as being advertised through websites such as AirBnb, which allows people to offer short-term lodgings or home stays for a fee.

At the time of writing there were 247 Jersey listings on the website, with prices ranging between £26 per night to more than £400 per night.

Under the Planning and Building Law, the use of a property for short-term holiday letting is defined as ‘development’, and requires planning permission. 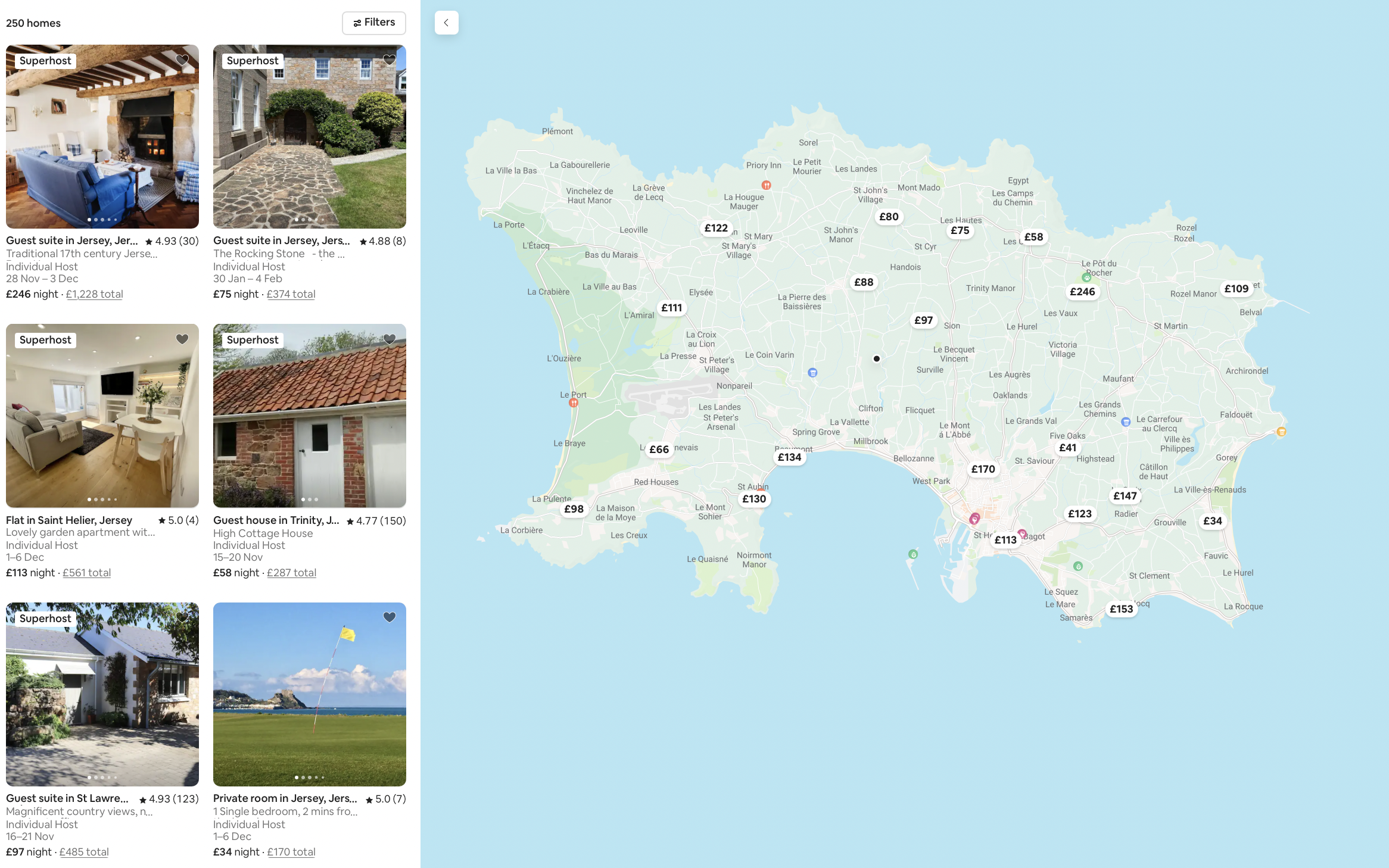 Pictured: A selection on the properties currently available to let on AirBnb.

Deputy Warr said officers would now be "cracking down" on those doing so illegally, to help conserve the Island's built housing stock and avoid "building on greenfields".

However, Environment Minister Jonathan Renouf said this did not concern situations where someone may be renting a single room or letting their home as a "one-off" while on holiday.

"The whole point of this exercise is to encourage the people who have properties on short-term holiday lets is to check whether they actually have the relevant planning permission.

"What doesn't require planning permission is if you go away for three weeks in the summer and put your place on a holiday let website for that period – that isn't a change of use because you are coming back to it. If you move out – say you move in with a friend – and think "I can put my home on the market on Airbnb and make some money", that is a change of use and that requires planning permission,' he added.

However, he said that those breaking the planning law were being given "fair chance to regularise their position".

"If you flagrantly carry on – the same as if you build two extra floors on a bungalow without planning permission – you are going to have an enforcement against you. We would do the same here and there would be a financial penalty for breach of planning law – but we hope it doesn't come to that,' he added.

Deputy Warr said the Island's growing housing crisis had brought the issue to his attention, as these were properties that were potentially no longer being used "for the community".

He added that the government was taking a 'reasonable approach' to the issue, but that it was "cracking down on it".

"These are laws which are already in place – they just haven't been applied, maybe because it wasn't perceived as a major issue in the past. As things have stepped up with the housing [crisis] I think it has become more at the front and centre of what is going on.

"I've been talking a lot about vacant homes and how we use our built stock more effectively with regard to housing. If we start letting all of this go out for stuff it wasn't intended for, I think we will start building on greenfields – it is as simple as that," Deputy Warr continued.

Islanders can contact planning@gov.je for advice and clarification on housing units and short-term lettings.

Posted by MichaelEvans46 on Nov 15th, 2022
Please correct me if I am wrong but I have always thought that unless you are qualified you cannot live in/rent qualified housing?
Posted by john garner on Nov 15th, 2022
However, he said that those breaking the planning law were being given "fair chance to regularise their position". = we will try and scare people instead because we know we wont win a court case
Posted by Private Individual on Nov 15th, 2022
Forgive if I'm wrong, but I thought I owned my house and could do what I wanted with it?

It appears that anything you own the government is claiming they can demand you to downsize because it doesn't suit their agenda, and force you into unsuitable accommodation. Or stop you from doing with your property what you want, such as rent it out for a few weeks a year.

There is absolutely NO MENTION of population control in any of the latest narrative, so why are we being forced out of our homes by a government who can't control its borders and who have issued 6 times as many licences to people from outside Jersey to come and live here!

They are the cause of all our problems, not the odd person renting a room out every now and again.

Stop the uncontrolled immigration and you stop the problem.
Posted by john garner on Nov 15th, 2022
MichaelEvans46 .......This concerns only your MAIN residence which you are allowed to rent for up to 6 months in any one calendar year,,Theoretically you could rent it out from July 1st 2022 to June 30th 2023 because that is over 2 calendar years .One person I knew used to rent their house out for a few months every year to Dick Ray at the Opera House for the summer season star
Posted by Jon Jon on Nov 15th, 2022
This makes me laugh, if I wanted to go travelling around the world for a few years I'd certainly let my property out .It is my own house so sod off government ,Planning want to look into all these properties who make alterations to their properties without permission including sheds.
Posted by Scott Mills on Nov 15th, 2022
airbnb live since 2007, only 15/16 years later......... Jersey the pro-active government.
Posted by Private Individual on Nov 15th, 2022
The government is the problem, with no control of our borders and a total lack of responsibility to people that already live here.

Where is the population control people have been screaming about for the past 30 years? The housing shortage and lack of suitable housing is solely down to this massive increase in population, which has been covered many times by the bailiwick express.
Posted by Jo Collins on Nov 16th, 2022
May be the six fold increase in work permits is required because people like Private Individual are demanding the services they provide?
Posted by Private Individual on Nov 29th, 2022
Why is it that the JDC are allowed to sell to speculators on the Horizon project and nothing is being done about it as they are now advertising through local estate agents in renting them??
To place a comment please login Login »