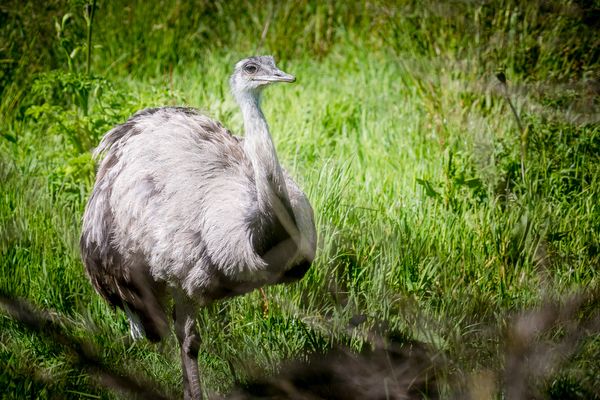 She’s been giving her owner the runaround for almost a week but the hunt for Rosie-Lee is still on - despite coming agonisingly close to recapture yesterday afternoon.

The Greater American Rhea – a large flightless bird, originally from South America, went missing from her home at Seamus Saddlery in St John at the weekend and has been spotted running around the countryside quite a few times since.

Her owner, Seamus Nicolle, did manage to get up close to her yesterday lunchtime when she was found in a potato field not far from home and close to Betty May Fashions but he didn’t have a big enough team of people with him to round her up and she’s still on the loose today.

Seamus said: “We spent nearly an hour trying to catch her, it’s very difficult, they are very fast birds.”

Although Seamus managed to get up close enough to her to give her a pat and some food, he couldn’t coax her back home.

He said: “I’ve got advice from Durrell and a vet who has been looking after the rheas for a number of years and I need to walk her from one field to the next. I think I need to tag her with GPS!

“I’m worried but I’m going to try and coax her back to the farm and hopefully she’ll hear the males calling, they’ve got a particular sound and that would be a great help.”

He went out with another search party last night to look for her but by 6 pm there was no sign of the elusive lady. Seamus is desperate to get her home safe and sound and is asking anyone who spots her to give him a bell on 07797 720864 so that he can round up a bigger team and track her down again.

Posted by Tina Le Clercq on Jun 5th, 2015
Perhaps Seamus should play a recording of the males near where he thinks she is & she may follow. Good luck!
To place a comment please login Login »