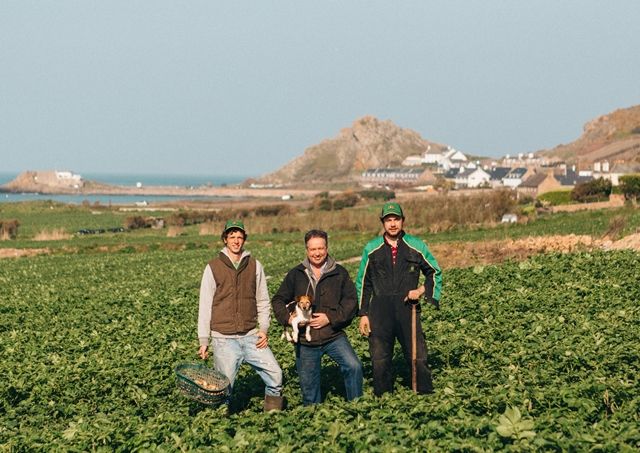 More green fingered Islanders have been given the Genuine Jersey seal of approval – their new guarantee of local provenance.

Jersey Royal growers - the Le Feuvre Family, farmer Nick Mourant who grows the spuds for export and the team behind the idea to create the Island’s first “Durrell-style” zoo for plants are all new members of the Association.

There are now over 170 local members – all producing goods that are either reared, grown or caught in Jersey or created by accredited Islanders and local businesses.

Charlie, Powell and Tyrone Le Feuvre grow Jersey royals in their fields out at L’Etacq, in St Mary and St Martin and keep their honesty boxes well stocked with them in each of those parishes as well as their roadside box in St Brelade. They’ll also be selling broccoli and main crop potatoes later this summer.

Nick Mourant runs Meleches Farm and is a fifth generation farmer who’s been in the business for 35 years. He’s one of the Island’s largest independent growers with 1,400 vergées under cultivation, mainly full of our famous spuds which are exported by Albert Barlett.

This year he’s also set up three honesty boxes – one close to his farm on Trinity Hill and two in St Lawrence and when he’s not busy growing Royals he plants biofumigants – crops to help cut down the need for pesticides and other chemicals.

The Botanic Gardens of Jersey is a not-for-profit project led by Kew-trained horticulturalist Bruce Labey, horticulturalist and project manager Kate Langlois and management consultant Stephen Atherley. Together their aim is to create a network of botanical gardens around the Island, a ‘Green Ark’ for endangered plant species

The charity behind the project, the Jersey Botanic Gardens Trust, is based on similar lines to Durrell. It aims to create a new multi-million pound world class attraction in the island so that Jersey is a global centre of excellence in the preservation of both plants and animals.

The team think they’ve found the perfect site found for their main attraction – a botanical garden in the south-west of the Island and hope to find out what Islanders think about their plans soon. They are also seeking funding to ensure their big ideas become a reality.