Physio and patient team up to launch “empowering” MRI service 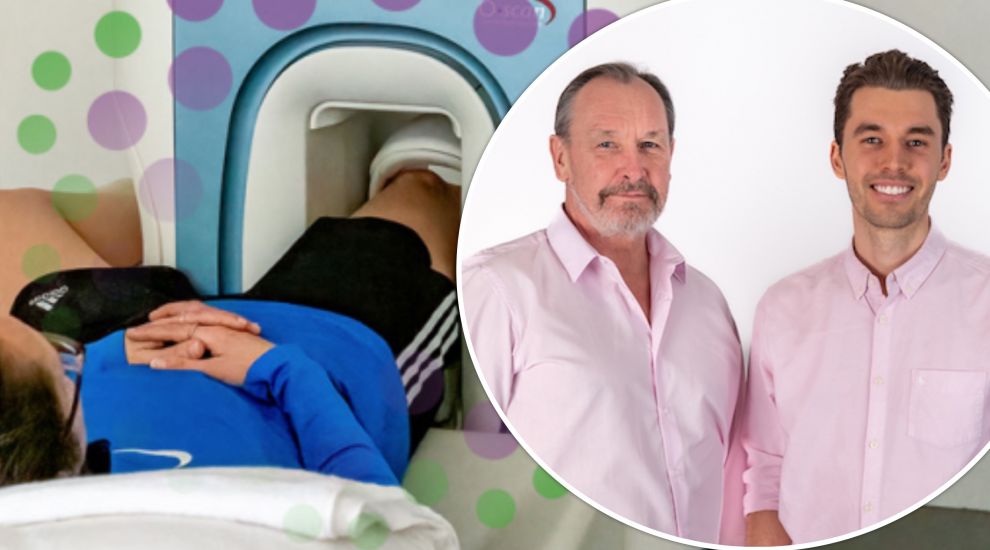 Physio and patient team up to launch “empowering” MRI service

When one local businessman suffered a sports injury, little did he realise it would set him on a journey that would ultimately see him buy an MRI scanner from Guernsey and go into business with his physiotherapist.

Newly opened next to Strive in St. Peter, MRI Jersey was founded by Paul Deveney, a physiotherapist with over 30 years’ experience, and Will Lingard, who was originally one of Paul's physiotherapy patients.

It all started with a "throwaway" comment, as Express found out...

The pair had been working on other business projects together when Paul heard of an MRI scanner for sale in Guernsey.

Paul explained: "Working as a physiotherapist, I noticed that it is quite hard for people to get MRI scans in Jersey so when one came up for sale I thought, 'what a great idea!'.

"I asked Will if he wanted to get involved too as I’m not very good at the logistics side of things and he is."

Will says he is "motivated by the opportunity to tackle some of the challenges faced by the healthcare sector".

From injury to interest

The pair have also been joined in their business venture by Rachel Carlotti, an experienced MRI radiographer, and Paul Davies, who has knowledge of the healthcare sector after having set up multiple dental practises across Jersey and the UK. 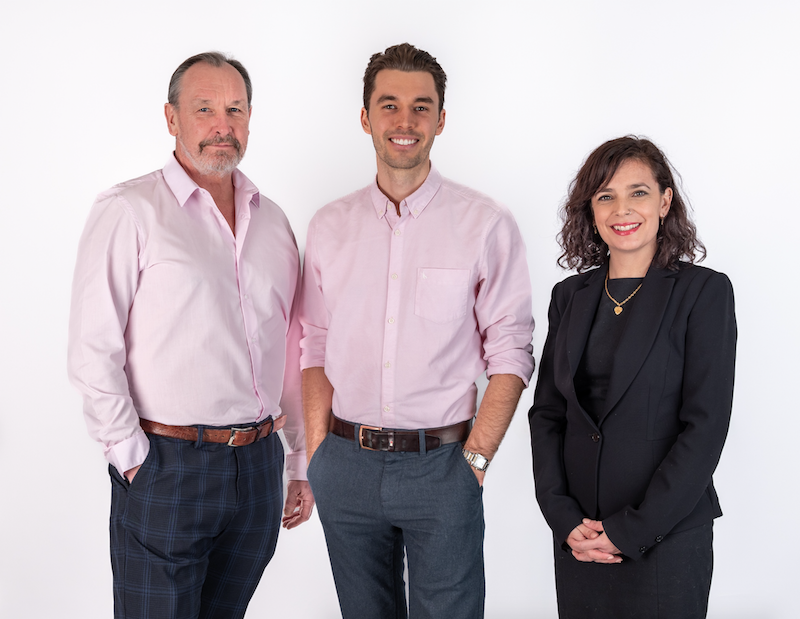 Paul said: "The four of us have come together, and we've had some good fun doing this!"

After purchasing the MRI scanner, Paul and Will invested thousands of pounds in upgrading the software to make it that of a 2022 specification scanner.

Will said: "We currently have the most modern scanner for that manufacturer in the world. We have the newest software."

"There's a broad spectrum of joints we scan"

Will explained: "The reason why we can scan so cheaply is because we've narrowed what we look at to the extremities so that we can be that much more efficient and still get good quality."

Paul added: "There's a broad spectrum of joints that we can scan, but what we can't do is everything."

MRI Jersey has only been open for a month, but the entrepreneurs have already noticed a growing demand.

Will said: "We've had fantastic feedback from everyone so far. But our main priority at the minute has just been a slow approach to seeing people to ensure patient care.

"Paul is patient-care driven, Rachel has come from hospital work, and I like things to be incredibly efficient so we've taken a much slower approach to opening up to make sure we get the care aspect right." 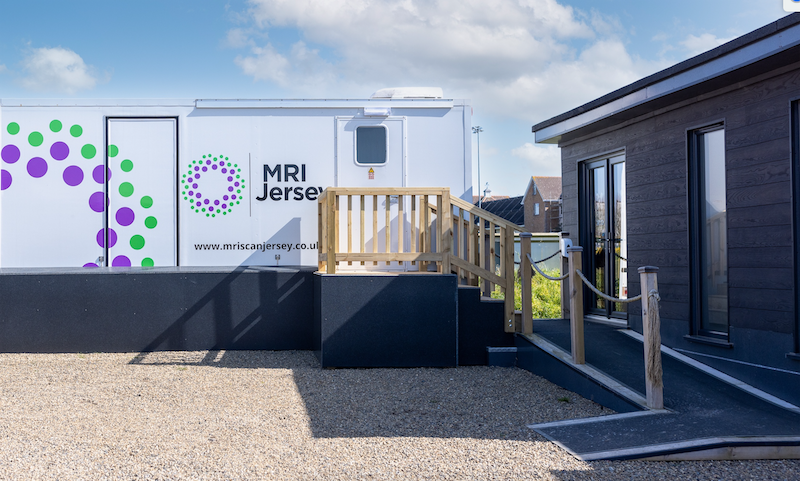 Pictured: MRI Jersey is located outside the Strive Health Club.

"Our demand is now definitely growing and we're learning the most efficient way as to how we can keep a very high standard of care whilst still delivering very fast results. We are therefore ramping up our behind-the-scenes logistics every day to make sure that flows very smoothly.

"We're also looking at doing a much bigger investment in technology as well, to streamline that process to a much higher level of efficiency and speed. We think we’ve done very well up to now, so our main goal is to keep doing well for a long time."

MRI scans are available through both GP referrals and patient self-referrals with bookings made via their website - something Paul explained is intended to "empower" the patient.

He said: "For example, someone may have a knee problem and they'll look into that online and think ‘I might have a torn meniscus’ or ‘I might have a medial collateral ligament strain’, so they’ll go and have an MRI scan.

"That process wasn't possible for the public before. You had to go through your doctor to get a referral, and then it's got to be authorised by the hospital. But this gives the public another option, with a quick turnaround time.

"And if there is an issue, we're able to flag it up and then they can then do what they want with the results."

Paul and Will have also been able to help patients who are claustrophobic or scared of hospitals, as the scanner at MRI Jersey is small and open.

Will said: "It's nice to be able to reassure people while still keeping the highest standard of safety and care.

"Hospitals don't have the ability to change their environment, but we can introduce most modern technology and practices in a manner where people are a little bit more comfortable." 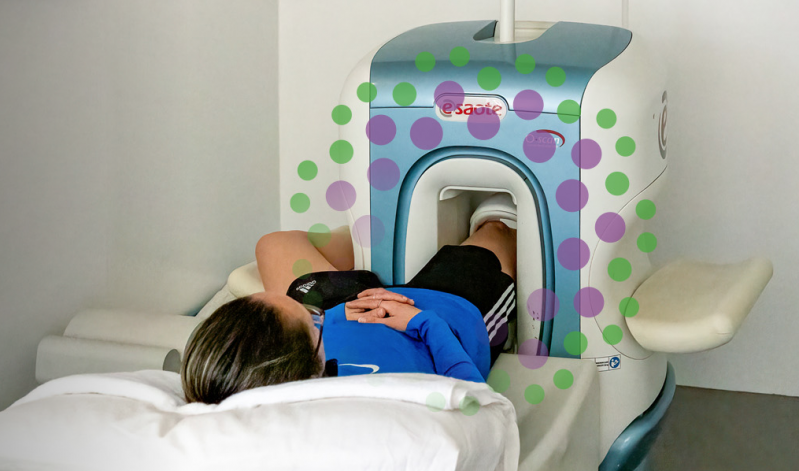 Pictured: The scanner at MRI Jersey is small and open to avoid fear or claustrophobia.

"It's great when people are scared to come in and then they do and they're completely relaxed, and that fear that's been lingering for a long time has now passed. It's just fantastic to see," he added.

Although their "slow opening" has been "running smoothly" so far, even the healthcare industry is not immune to the threat of rising prices.

Paul said: "We've worked very hard to stick to the prices we set when we first started about a year and a half ago before the pandemic, although prices keep going up! We have a very strong goal to stick to those prices to keep things as accessible as possible but the cost of running an MRI service is very expensive, especially in an island.

"What brings up all the other costs up is the fact that everything has to be flown in, which makes it more expensive than MRI scanners in other places. People don't necessarily see that."

Will added: "We're not running a charity, but it's really important to us to keep the cost to a level where the bulk of people can afford it.

"We want to be accessible and be able to offer the service to best benefit people."

Paul concluded:  "I am proud to have been able to fulfil my ambition of bringing an MRI imaging service to Jersey that can provide that. I’m looking forward to welcoming patients and delivering an efficient and cost-effective service to the population.”

This article first appeared on Bailiwick Wellbeing, your exclusive weekly guide to keeping a healthy mind, body and soul in Jersey. Sign up for free here.