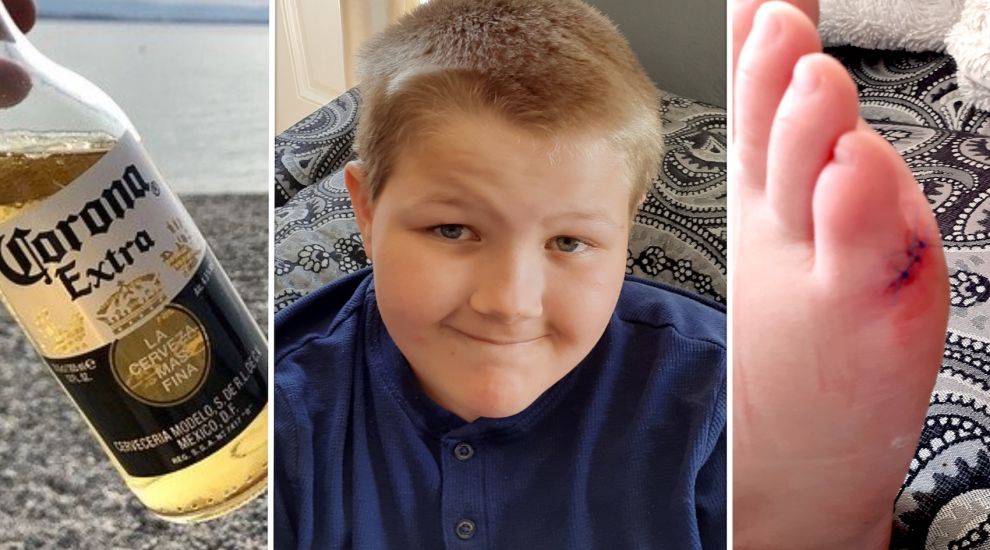 A mum is urging “selfish” litterers to think twice before leaving their waste after a smashed Corona bottle left her young son needing stitches.

The warning comes amid a spate of littering across the island, as ‘Stay at Home’ restrictions begin to ease, which many are warning could lead to serious injuries for children and animals.

Avid swimmer 11-year-old Marshall Ide was among the casualties, having slashed his foot on a beer bottle while enjoying some time in the water at Havre des Pas pool on Monday evening.

“Marshall was swimming and was climbing out the pool at the area next to the little kids pool. He describes it as being a bit of a ledge under the water that they use to help them get out the pool. The piece of glass bottle had floated to that piece of ledge at that time he climbed out and it cut the side of his foot next to his small toe,” his mum, Sylvie Simpson, explained. 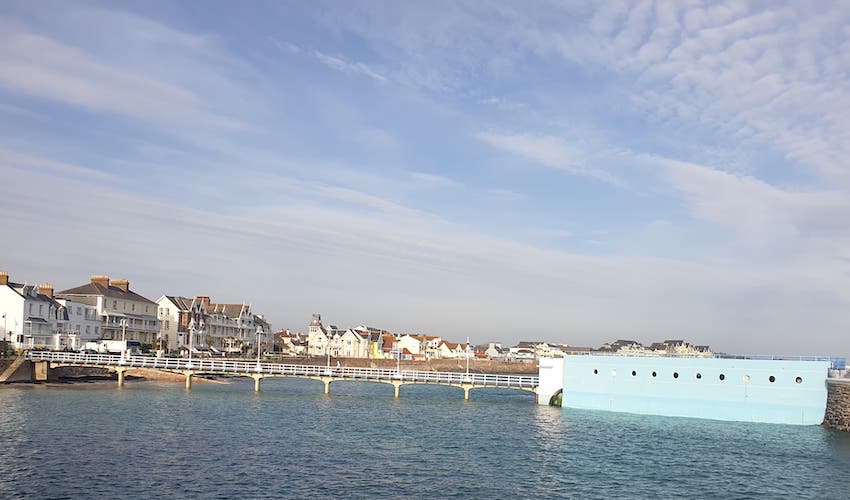 Pictured: Marshall had been swimming at Havre des Pas when he was injured.

Although he at first thought he had stepped on a sharp shell, Marshall realised upon looking down that it was in fact a bottle of Corona with a jagged edge.

He went straight down to A&E, where he had to receive stitches and have the wound dressed.

Unable to spend “spend hours swimming and diving and playing with mates” as usual, Sylvie says the injury has left her son feeling “pretty miserable”.

While she recalls that Havre des Pas used to be fairly well-kept, with a local café owner previously giving children treats in return for collecting buckets of rubbish, she says she’s definitely noticed things worsening in recent weeks, with bottles and cans strewn across the coastal zone.

Although Marshall says he won’t be discouraged by people’s bad behaviour from resuming swimming when his foot heals, Sylvie is pleading with islanders to help ensure no one else has to suffer in the same way. 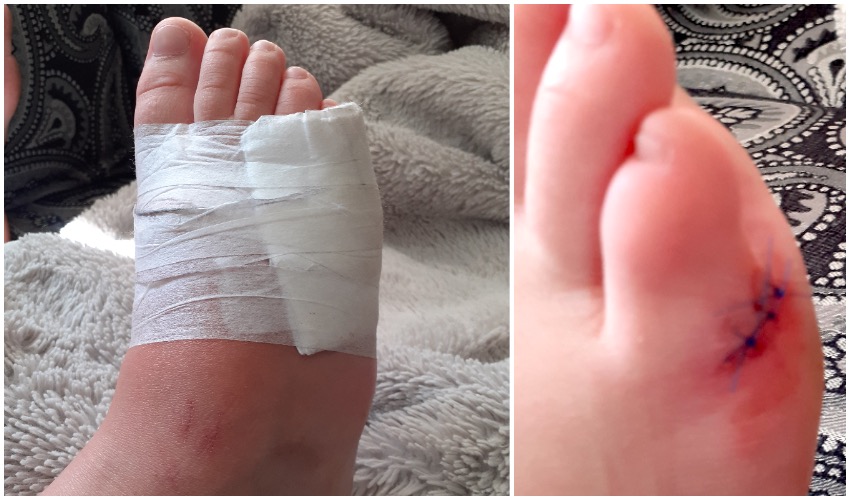 Pictured: Marshall had to be taken to hospital to receive stitches.

“Children should be able to have a swim without fear of cutting their foot open,” she said.

“…Think of the consequences before just leaving this stuff lying around. Respect the beautiful island we live on or leave.”

The Government told Express it hasn’t “seen any increase in people attending the Urgent Treatment Centre or A&E with littering-related injuries, including those relating to BBQs”, but, like Sylvie, many islanders are predicting that more children and animals could be hurt if the trend continues.

In a post on Facebook, Child Accident Prevention Jersey warned: “If you are using a low level BBQ please remember that the ground or sand underneath it will become very hot and will stay that way for some time. To prevent children from burning their feet please cool the area or prevent access to it until it has cooled down. Never bury a disposable BBQ in the sand!”

Sylvie is being joined in her bid to raise awareness by The Forum Bar landlord and litter-picker Daniel Straiton, who was so appalled at the amount of rubbish he found on coastal rocks that he made a live video of the scene.

“What upset me and made me angry was the fact that, this is groups of people and within that group not one of them has the decency to even attempt to pick up rubbish being left behind,” he told Express.

“By all means, use the beach to meet and socialise within the confines of the ‘rules’… but don’t abuse that privilege by leaving, cans, bottles, BBQs, plastic, food waste etc on the beaches and other beauty spots or vandalising stealing property from Jersey businesses who are all trying their best to survive and adapt to these changes.

“It’s not only potentially hazardous to other people, it also impacts on the environment, our amazing eco-system, dogs/horses that use the beach, all the different birds. I don’t think these people understand the damage that can be caused by there selfish reckless actions.”

The video has since been watched more than 21,000 times and received over 400 shares, with many viewers describing the litterers’ behaviour as “awful” and “disgusting”.

Daniel thinks there could be more regular patrols of “hotspots” and on the spot fines, but also has another suggestion up his sleeve: “Make anyone caught committing one of these offences, they should be made to spend 8hrs cleaning up beaches and other hot spots for litter around the island. They might think against doing it again and also prevent others from doing it.”

Over the past 10 years, there have only been nine recorded cases of littering offences.

Other FOI statistics showed that the highest recorded fine for littering since 2008 was £150 in 2012, while the maximum penalty is £500.

Video: Over 21,000 people have watched Daniel Straiton's footage of the mess left by beachgoers.

Contacted for comment by Express, government officials acknowledged the rise in littering due to “a combination of the easing of lockdown restrictions, the recent good weather, half-term, and off-Island travel restrictions”.

A spokesperson said: “We work closely with the States of Jersey Police to manage and enforce littering and fly-tipping. We currently have rangers, survey teams and bathing water monitoring in place to manage the natural environment. Growth, Housing and Environment staff regularly empty bins of litter to ensure that Islanders can dispose of their waste responsibly.

“We’d urge Islanders to manage their waste responsibly, and dispose of any litter they create so that others can enjoy the Island’s beaches and open spaces.

“Islanders can report via LoveJersey, either online or using the app: https://lovejersey.gov.je/reports/home.”

Aside from the threat of being reported via LoveJersey or to the Police, littering islanders are now facing a new threat: being shamed online. 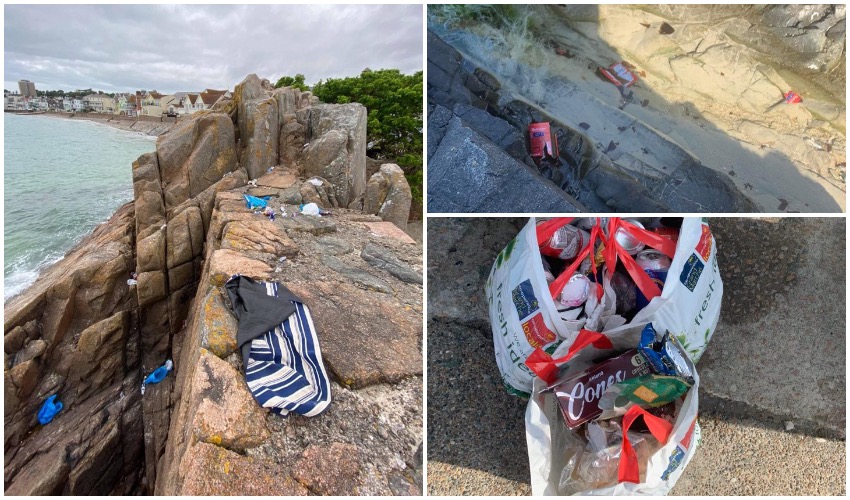 Pictured: Some of the mess encountered by Daniel.

Facebook group ‘Shame on Your Trash Jersey’ was created this week and has already grown to nearly 400 members.

The best way to avoid having your actions called out on the group?

In Daniel’s words: “We can all do our bit to keep Jersey beautiful. Like the old saying goes, ‘Take nothing but pictures, leave nothing but footprints, kill nothing but time.’”

Posted by Joe Lucas on May 28th, 2020
This makes me feel physically sick, poor Marshall. People need to take responsibility for their actions, there are plenty of bins around to use, My four year old and i found broken glass on the beach between Bel Royal and First Tower, i took it home and put in our recycling so no harm done, however the outcome could have been very different. Wishing you a speed recover and i hope it has not put you off swimming.
To place a comment please login Login »