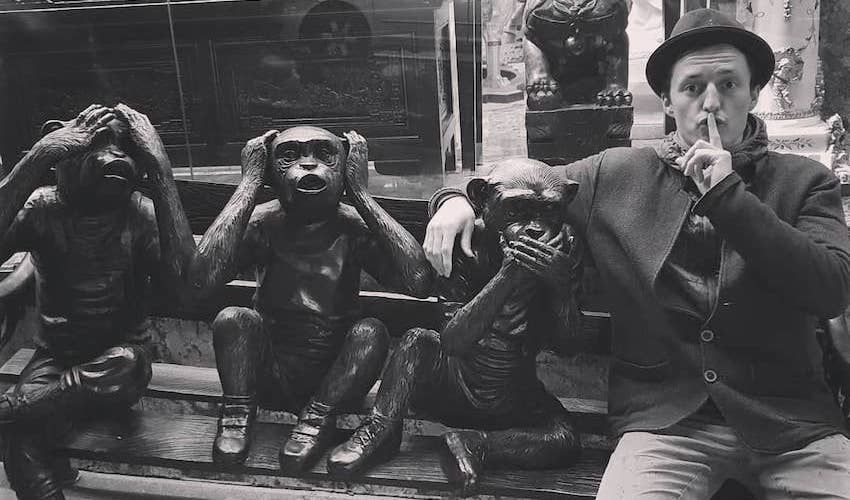 After finding music six years ago, a local singer/songwriter has launched a "creative hub" open to anyone wishing to share their original music, poetry and art.

Created by David Keenan, the SongWriters' Society gathers monthly at the Blue Note Bar for gigs where artists can sing their original songs.

Ahead of their latest event - tonight at 19:30 - Express met David to learn about his musical path and how the Society came to be.

In his own admission, David found music late. Although he had a lot of “musical friends” growing up and studied music for his GCSEs, the self-proclaimed “bedroom guitarist” never really took music seriously, preferring rock climbing and kayaking.

It all changed after a snowboarding accident in 2013. “During the last year of my degree, I had an accident and broke my neck and back,” David explained. “I was in a back brace for six months and I did not leave the house much.

“My body was agitated, and I picked up a guitar with a missing string and started playing. Music became that new thing, I became addicted.”

David taught himself how to play the instrument by watching videos and his friends and took a few shortcuts along the way. “At first, I played mainly for fun, but I never stopped,” he said.

“I could feel the progress as I continued. The biggest catalyst in progressing in anything is the time to practice. It’s hard for me to say it was a good thing but without my accident, I would not have progressed as much.”

Pictured: David taught himself how to play the guitar.

After practising other artists’ songs, including Jamie T’s, David eventually started writing his own, expressing in his songs what he was going through.

His first live performance at an open mic evening was a formative experience. “The open mic scene was important for me in Jersey, like with anything you realise how important those moments were later,” he said.

“Being on stage was really good for me. You always think you are a lot better than you are! I learned how to play in time and not being so smooth! I had never changed a string on stage either, you pick up all these things through experiences.”

Pictured: David has travelled a lot with his guitar.

Experiences, David has had many since then. He went travelling with his guitar, busking in the street, relishing in the contact with other people and meeting other musicians from around the world, some of whom he went out to perform or create music with.

“I played at lots of festival from being genuine or just putting myself out there and having a bit of fun,” he said.

One day David was invited to a Songwriter Society in New Zealand, and something clicked. “I felt in my element,” he said.

David brought the idea back to Jersey, where he says talented musicians have nowhere to call home. “The musical scene does not have a venue for original music. For a scene to exists, it needs a physical place to meet up and socialise so that they do not feel they are just a customer,” David said.

“There is a lot of support for kids and some really talented kids but after they are 18, there is nothing there. But music lasts a lifetime.”

The song writer therefore set out to create a “creative hub that brings together, supports and showcases original music, poetry, and art” and gave it the name of Songwriters’ Society.

“An open scene can be amazing or painfully bad,” he explained. “I wanted to take all the good things about the open scene and create an event where people want to listen that would bring out better musicians.”

Jersey’s Songwriters Society now gathers every month for the Blue Note Sessions, at the eponymous Broad Street bar. Sometimes, David can be heard playing his “indie electro kind of sound.”

Nowadays he performs under the name of Axon Bower. Axon is the part of a cell that sends information to different neurons, muscles and glands, while the bowerbird is a type of bird known for its unique courtship where the male builds its own nest, decorating it with bright coloured objects, to attract a female.

“I was trying to list my favourite words,” David explained. “I wanted something that would sound good and look good and that would soon like a person but also a band.”

When asked what his musical inspirations are, David names Jeff Buckley, Jack White, Paolo Nutini and Jamie T, among others, people with a raw edge who “mean what they say.” But his travelling experiences, and the many people whom he met along the way, have also shaped his musical style and his indie rock vibe.

“There is a lot of inspiration that comes from travelling and busking. I would say my style is quite observational. I am quite a positive person, even the songs I wrote whilst I was bed bound, I feel some of them can be quite fun.”