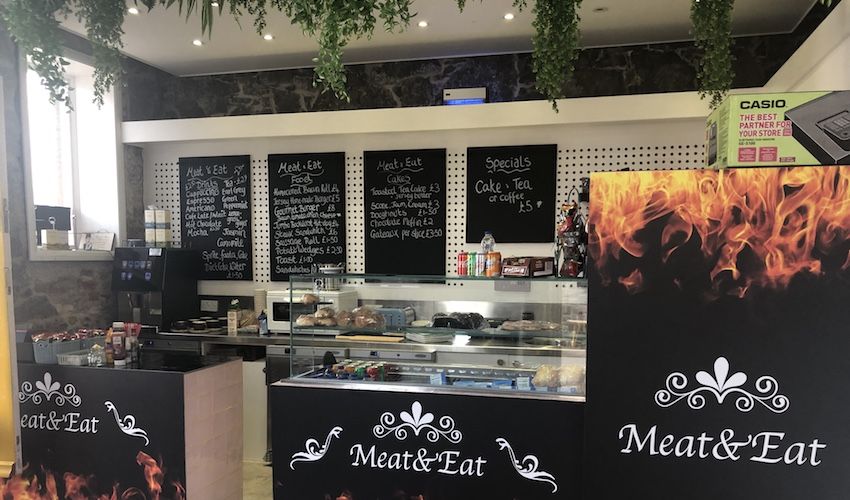 A family-run business has opened its doors at Liberty Wharf with meat, meat and more meat on its “wholesome” menu - taking over the space of a former vegan-friendly café.

Outside catering company ‘Meat & Eat’ has pulled up to the shopping centre to open its first ever diner offering homemade Jersey burgers, Aberdeen Angus steak baguettes and wild boar sausage.

Husband and wife Shane and Liza Kennedy have been running the business together as a catering company for many years – feeding the crowds at events like the Battle of Flowers and Battle of Britain – but now they’ve set up shop in a permanent location.

Their ‘meat feast’ diner takes over the space left by organic health café Moo, which closed this summer when its owner decided to put the business up for sale and moo-ve on to different things.

Pictured: The new diner has been open for two weeks. (Meat & Eat)

Liza told Express that it has always been a dream of hers to open up a café and the space at Liberty Wharf “just happened at the right time”.

Explaining that her husband used to be a butcher, Liza says that the company’s “wholesome” menu is sourced from local butcheries.

This, the businesswoman remarks, is something that the family-business “pride ourselves on."

Amidst a rise of health food and vegan cafés, Liza sees ‘Meat & Eat’ as doing “something a bit different".

“It’s not the normal café stuff that everyone’s doing at the moment when they’re hitting on the vegan, the vegetarian and the salads… We’ve gone completely the opposite way!”

Having been open for two weeks, Liza says the spot is proving very popular among holidaymakers, but she hopes that more locals will realise that the new diner is open for business.

When asked what the differences are between running a catering company and a diner, Liza laughed: “It’s hard work!”

Open seven-days-a-week and keeping the catering business on-the-go alongside is no mean feat, but Liza adds that at least in the diner there’s more of a “relaxed” atmosphere than in the catering truck.

“It’s more laid-back. You don’t have to serve things within two minutes flat!”