New measures to save endangered species 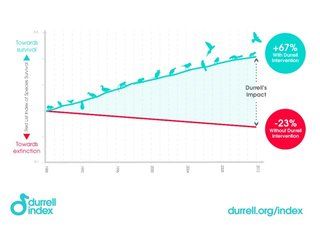 New measures to save endangered species

You can now see exactly what effect Jersey’s world famous charity is having on some of the world’s most threatened animals.

Durrell has launched an Index to measure its performance and prove to its supporters what a difference it is making.

The charity hopes that more people will be inclined to donate to and support its cause when they can see exactly what impact its work is having on each species.

One of the most important indicators tracks the success of conservation projects and what would happened to certain species if the charity hadn’t taken any action at all. The Red List Index of Species Survival shows that the charity has saved five species from extinction and has improved the status of many more.

Latest research shows conservation has led to 63 animal species being re-graded to a less threatened status on the International Union for Conservation of Nature (IUCN) Red List - the globally authoritative database on the status of species. 12% of these are Durrell led or supported projects – a huge success for a small charity.

Durrell’s Head of Conservation Science Dr Richard Young said: “Conservation is often full of bad news. We have created the Durrell Index to provide our supporters and partners with clear and credible proof of the positive impacts we are having in saving species from extinction. It shows that conservation works but it takes time and commitment.”