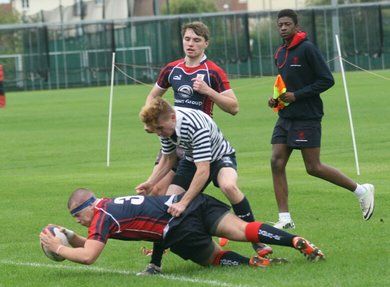 A 16-year-old Jersey schoolboy is hoping to find a sponsorship deal to help him kick-off a professional rugby career.

Marc Davies is Jersey’s U16’s captain, plays in the Hampshire County team and has been picked for the London Irish Silver Elite squad but the high cost of playing off-Island has meant he’s had to pass on a lot of important training sessions.

Marc took up the sport at Le Rocquier School at the age of 12 where rugby coaches soon spotted his talent. A year later he was encouraged to join the Jersey RFC Academy and is now one of their top players.

The Academy helps fund youngsters to county level but not when they go away to play for other clubs so Marc’s parents are left to tackle most of the costs of his flights, hotels and hire cars.

Academy Chairman Roger Nightingale said: “To further themselves in the game of rugby, players have really got to get off the Island. The better you are the more you’ve got to go to the UK,

Marc had to travel to Southampton 11 times for trials before being selected to play for Hampshire but he’s only managed to train with the young London Irish side a few times because of the expense of getting to Surrey.

Marc said: “At the beginning of August I got to train with London Irish at their new training complex in Sunbury that was out of this world."

“I feel I miss out on so much expert training not being able to get to them as often as I would like due to time and money.”

If you are interested in sponsoring Marc you can contact his dad Paul on 07829 710121 or by emailing paul.davies29@gmail.com

FOCUS: Keeping the economy in shape