No jail for repeat drunk driver who crashed into wall 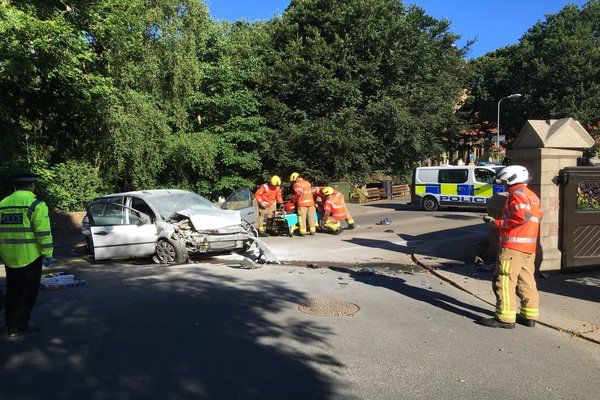 No jail for repeat drunk driver who crashed into wall

A convicted drunk driver escaped jail yesterday despite smashing her car while over the limit into a parish hall wall.

She was told she would face immediate incarceration if she failed to complete her sentence, 140 hours of community service, a four-year driving ban and £500 fine.

Assistant Magistrate Peter Harris said: “A mitigating factor is the position of your three children and you have done your best to care for them over the years. If it was not for three significant mitigating factors you would have been facing jail. This was a morning after driving offence so there was no flagrant instance of going out drinking and driving on the same evening, although this was a serious offence.

“Should you find yourself committing another drinking offence and come before the court again, prison will be inevitable. The community service sentence is a direct alternative to prison. If you fail to turn up for community service or breach it in any other way the same consequences will follow.”

This was Harvie’s third conviction for drink driving, which the Assistant Magistrate said would normally lead to an immediate jail term.

The defendant was found slumped in the driver’s seat and when the fire service arrived at the scene the car was on fire.

She was taken to hospital and a blood test revealed she had 187mcg of alcohol per 100ml of blood, nearly two and a half times over the legal limit of 80mcg.

She had previously been disqualified from driving and although the disqualification period was up, she had not re-taken her driving test, meaning she was also driving while banned.

Defending Advocate David Steenson said: “It was a reckless and criminal act rather than a flagrant breach of the law. She had been going through a particularly difficult time in her life and decided in the morning to go and see a close friend, the morning after drinking. She should have known better and was not in a logical state of mind at the time.

“She was fortunate no one else was injured in the incident. This was extremely frightening for her as the car was on fire. She has little or not recollection of what happened just before the accident.

“She was disqualified at the time in that she had done the theory part of the test but because of difficulties at home and pressure of work, she had not got around to taking the practical test.

“As for insurance, she had paid the policy, but obviously without having taken the test she was not insured.

“She pleaded guilty at the earliest opportunity and it is the case that she is genuinely sorry for what she has done and is utterly ashamed of her actions.

“The defendant has suffered significant punishment already in the form of the torment over the outcome of today. She is worried about what will happen to her three children. This court can imagine the stress and anxiety of how she must feel. The effect on her children means if she is incarcerated she will not be there on a daily basis and they are used to seeing their mother. These are children who have a caring and devoted mother and they will miss her dreadfully if she is incarcerated.”

Advocate Steenson said Harvie would lose her “highly paid” job if she was jailed and told the court she had sought help to solve her problems with alcohol.

He added: “She is not a first time offender. I am asking for leniency on behalf of the defendant and her family. The guidelines are only that and there are always exceptions.”

Assistant Magistrate Harris took 30 minutes to reach his decision, telling Harvie if the community service was not completed she would be jailed for eight months.

Posted by MarkSleep56 on Oct 19th, 2016
Laughable. Already banned, with previous conviction for drink driving, an absolute joke.
Posted by Ang Smith on Oct 19th, 2016
Why does she escape jail, when the Samoan rugby player was jailed for 5 months? They both drove while banned, she crashed, he didn't. She was local, he wasn't....different rules for different folk?
Posted by david forde on Oct 19th, 2016
Talk about sexist !had it been a Man he would have been jailed! This with the history is a farce
Posted by Trevor Carre on Oct 19th, 2016
I know someone who was caught twice for drink driving and had to serve a prison sentence. He had a valid driving licence, insurance and hadn't crashed. The only thing I can think of as to why he was sent to prison and she was not is because he is a man!
Posted by Beverley Bloor on Oct 19th, 2016
Absolutely disgraceful, how she didn't injure somebody before she crashed is a miracle! How the hell did Fatua Otto get 5 months in La Moye when he also may have a family to support, I am not condoning what he did, but how can he be jailed for a less serious offence & she be allowed to get a fine & community service ??!!!
Posted by Chris P Bacon on Oct 19th, 2016
Complete lack of consistency here in applying the law. What about the poor lady who stole money and was on her way to give it back. She was taken away from her kids. Lets see, what is more socially unacceptable? Stealing, yes it is bad. Driving while drunk, crashing and identifying this person has done it before, was banned from driving and was uninsured. Comon! GBP500 fine, dont make me laugh. She should be in jail, end of!!
Posted by Patrick Gormley on Oct 20th, 2016
Disgusting, sex discrimination at its best. One law for men, other law for women. Whatever happened to equal justice for all !
Posted by JEANNETTE AMY on Oct 21st, 2016
I cannot understand how they can think this a fitting punishment when you think how they treated the rugby player! If you have committed the offence 3 times then previous punishments have clearly not worked, so what makes them think it will teach her anything now. Totally wrong I think.
To place a comment please login Login »