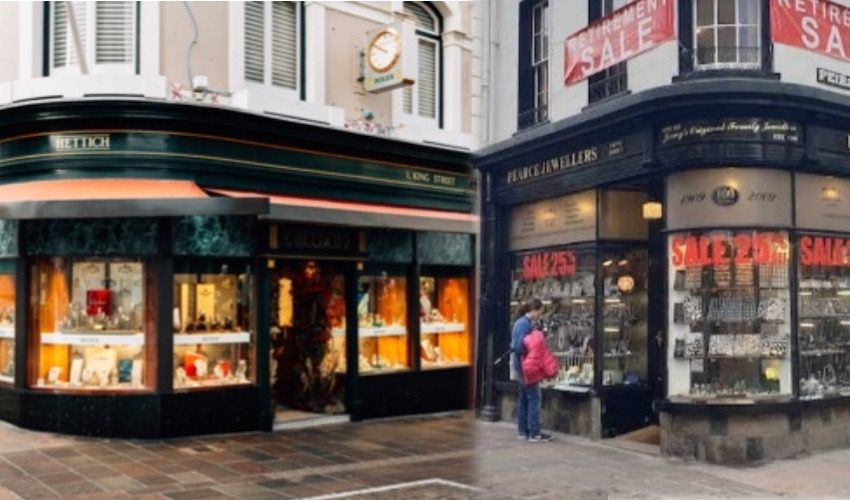 Family business Hettich Jewellers is set to take over the premises of fellow family-run business Pearce Jewellers as the family retires at the end of the year.

Both Pearce and Hettich are fourth-generation family businesses, with the former opening its doors in 1900 and Pearce following a few years later, opening in 1909.

Both businesses have stood the test of time, remaining buoyant through two world wars, the island’s Occupation and recessions that included the economic depression of the 1920s.

But Jane Pearce announced earlier this month that Pearce Jewellers - which was founded in 1909 by Herbert James Pearce at the corner of Peirson Place and King Street - would close at the end of the year after 100 years in business. 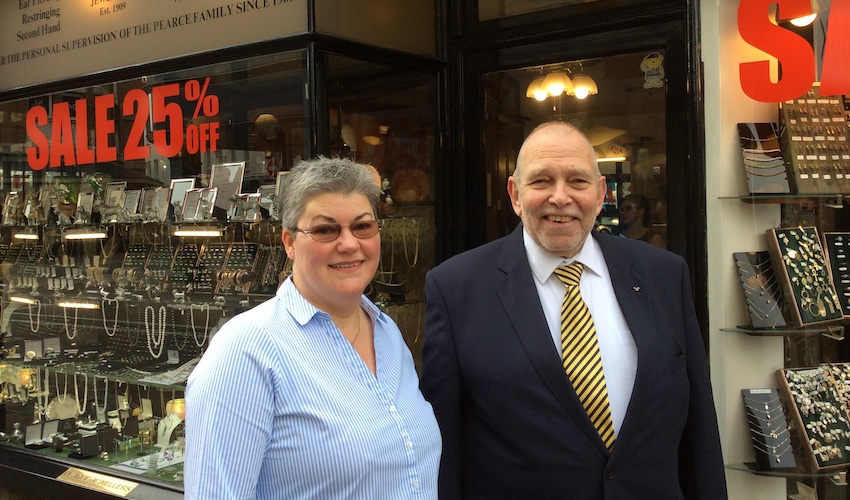 Pictured: Jane and Peter Pearce in front of their shop.

Mrs Pearce joined the business in 1984 after marrying Peter, Herbert's grandson. She explained that Peter, who is now aged 73, has been trying to retire for the past 10 years but has kept very much involved in the business,, adding that even though she is herself only 51, she wanted to retire “to spend time” with her husband.

She told Express: "It’s a positive decision for us, not so much for our customers who would like us to stay. We just thought we would be a bit selfish for a change. We have thoroughly enjoyed every minute of our time here. Retail is like a microcosm of life, you see all of humanity in a shop. I remember serving some of your regular customers, I remember pieces of jewellery and ordering something special for a customer.”

While Ms Pearce had hinted that another jeweller would take over the premises, she kept quiet about any details.

But today, Hettich, which is located almost next door to Pearce Jewellers - the two shops are only separated by the Peirson - has revealed it has acquired the property.

The story of Hettich began in 1900 with Edwin Hettich, a 21-year-old watch-maker and jeweller who opened J. Hettich & Sons on 1 King Street. Over the years, the business has had to evolve to suit the changing times. In addition to selling jewellery, Hettich once operated as an opticians, offering eye tests and even a selection of false eyes, discreetly displayed in flat trays at the back of the shop.

During the island’s occupation, Hettich stayed open although business dwindled to a few repairs, and by the time the island was liberated in 1945, their stock was limited to just three silver hatpins.

Edwin’s grandson, Tony Chinn, took on the shop’s first remodelling in 1966. The sophisticated new look led Hettich to be given the exclusive rights to Patek Philippe watches in the Channel Islands, along with showcasing Rolex and Omega watches. 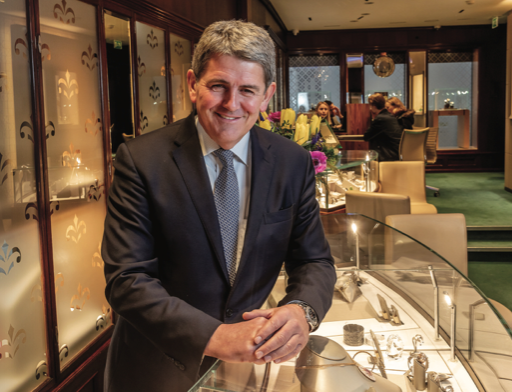 Jeffrey Chinn, Director of Hettich, commented on the acquisition: "As local family-run businesses, we both share a keen interest in the retail landscape’ explained Jeffrey Chinn, director of Hettich. The Pearce family felt it was the right time for them to retire, and we were keen on moving forward and expanding the Hettich business into new premises.

"It’s a positive decision for both of us, and we want to wish the Pearces well with their retirement. While it’s sad to see a family go, it’s comforting to know that another Jersey family will be in their place and we were pleased to be able to step in and make sure that another retail property continues to be in local ownership.

"With fewer Jersey businesses operating here now, we hope this is a positive sign of our confidence in the local market."

Pictured: Hettich and Pearce Jewellers are only departed by the door of the Person.

Mr Chinn said that while the business has seen "good times and bad times," Hettich has faith in the future of retail in Jersey. "We’re happy to invest in this expansion and help the Pearce family with their plans, and we’re excited about what we see as a promising future," he added.

"Pearce Jewellers has served the island for 110 years, and although their premises at 3 King Street won’t be the same as it was, it will still be a locally-owned, family-run business at the heart of Jersey’s high street."

The Director said the team is looking forward to moving into a "new era" of Hettich development. "Although we can’t yet reveal the details of our expansion plans, through investment in our premises and our people, we will create an environment and atmosphere which suit the high quality items we deal in and display our beautiful watches and jewellery at their best."