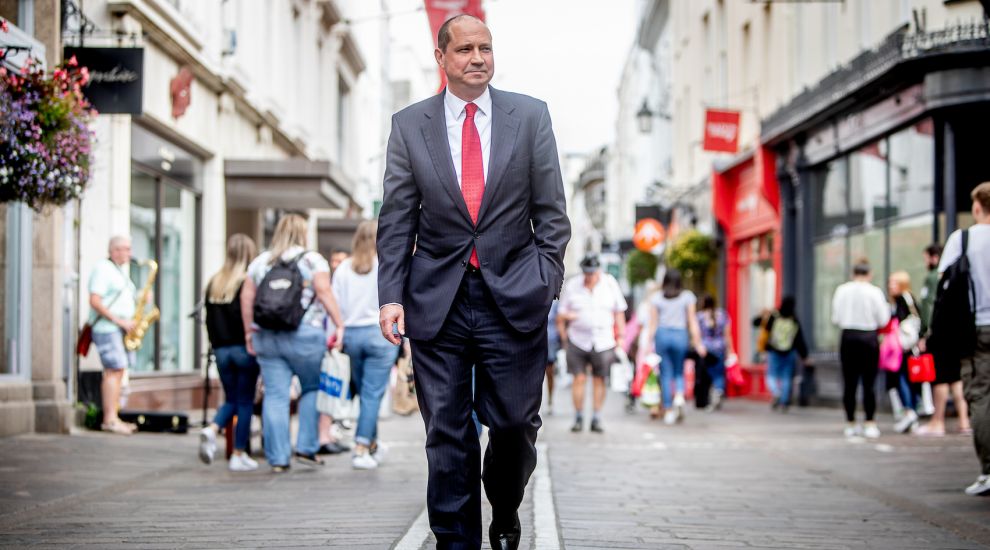 Since Jersey was hit by covid-19, Nick Vaughan has been sitting at the heart of the island's economic response, after only arriving little more than a year earlier.

Express went to meet him and began by asking him about the efficiency of the stimulus measure of giving £100 to every man, woman and child in the island, given the government’s Investment Appraisal Board assessed the potential for ‘leakage’ as three out of five?

Jersey is a small Island economy that imports nearly all of its goods, so leakage is inevitable with all stimulus measures, including more traditional options. I led the economic advice on the fiscal stimulus package, and was clear that by rearranging their spending from different income sources, people can get closer to what they want to buy in the first place. What sets the pre-paid card above other options, such as simply cash, is that in the first instance it cannot be spent off-island, and cannot be saved, so it will always have a lower potential for leakage than other options. 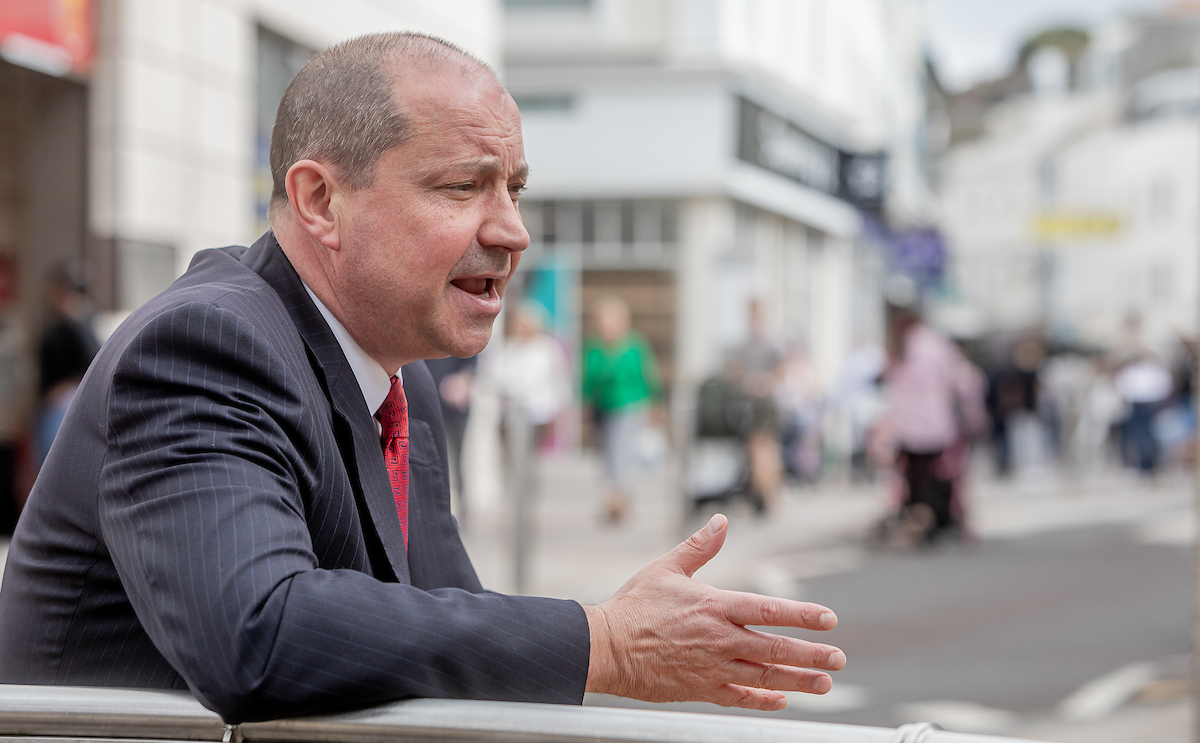 Pictured: Nick Vaughan has been overseeing the island's economic response to covid.

How will we measure the effect of it, ahead of future potential 'top ups'?

The Government will get information about how much is being spent, and where it is being spent, but the broader assessment of the recovery draws on key indicators such the numbers actively seeking work, or on income support, along with employment, and the quarterly business tendency survey.

The cut in employee social security contributions is an important part of the fiscal stimulus package that provides a rise in take-home pay for nine months from October. The cards issued to every islander provide the flexibility for government to add further support to the recovery very quickly if it is needed.

Normally governments opt for large construction projects as economic stimulus measures. If that is ruled out, to avoid over-heating in the construction sector, what other options do we have to stimulate the economy in the short-term, but which also provide a lasting legacy?

Generally large construction projects are not ideal for timely fiscal stimulus given their long lead time, but the large capital programme underway within the public sector provides the opportunity to offset part of any fall in private demand in the private sector in the recovery.

Other options could include making use of spare capacity elsewhere in the economy that could include publicly-funded work for the unemployed, along with skills and training. Where other sectors have the capacity for investment or maintenance that can be brought forward then government could look to fund those options.

Anecdotally, we hear reports about the pressure for locally-based staff reducing, as remote-working for staff from outside of Jersey becomes more accepted. Is that a trend you are also seeing, and if so, how do you see the implications panning out?

I’m not sure this is a significant factor in the demand for local staff, especially when compared with the supply of staff through migrant labour. What is clear, is that all staff are increasingly working flexibly.

It matters less where the work takes place, as long as it gets done. We can see from the Jersey Opinions and Lifestyle Survey that over half of people report that they are working from home at least some of the time. A trend that is common across all countries.

There will also be opportunities for Jersey staff and business to work in other countries remotely. More flexible working to fill skill shortages, and increase the effective supply of labour, would be a positive implication for the economy. 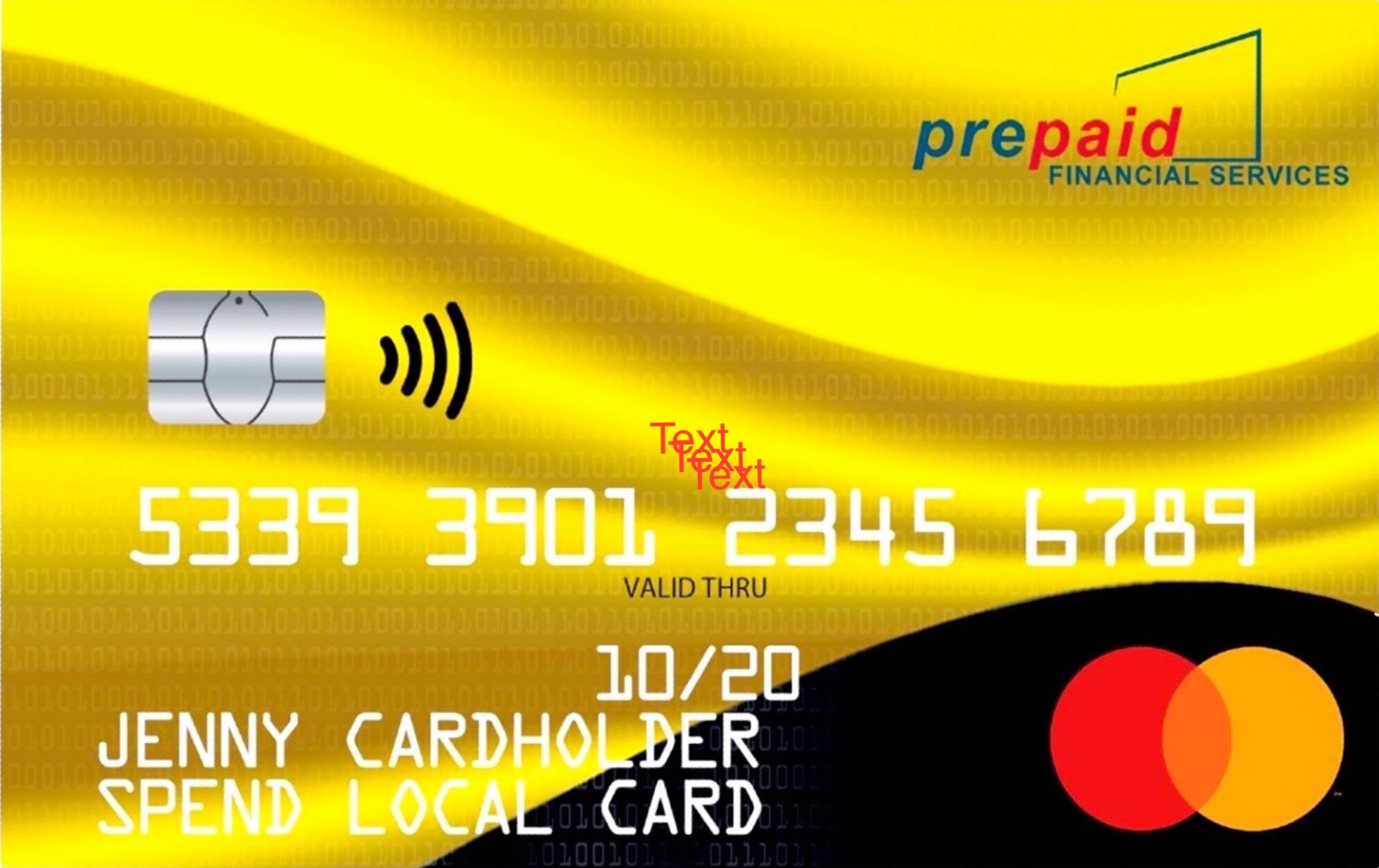 Pictured: "What sets the pre-paid card above other options, such as simply cash, is that in the first instance it cannot be spent off-island."

Successive governments have wrestled with the problem of boosting local productivity, but it seems a tough one to solve, and still widely misunderstood. Is it still an issue, why is it important, and how might we actually get a handle on it?

Paul Krugman has a famous summary that I think is always worth repeating: “Productivity isn't everything, but, in the long run, it is almost everything. A country’s ability to improve its standard of living over time depends almost entirely on its ability to raise its output per worker.”

It’s still a huge issue for Jersey in both the finance and non-finance sectors, and other countries more widely, such as the UK. The incredible lack of productivity growth in the UK for example after the 2008 crisis has been dubbed ‘the productivity puzzle.’

There is a consensus around some key drivers of productivity that include investment in physical capital and human capital i.e. skills, innovation, enterprise and competition.

Jersey’s economy has heavily relied on the banking sector specifically for many years - but that sector is facing substantial headwinds, as noted in the recent Fiscal Policy Panel (FPP) report. How much of an issue is this for us, and what might we do about it?

Profits, output and hence productivity, in the banking sector in Jersey have a huge contribution from net interest income, that in a stylised way can be thought of the difference between the interest rate received on loans and paid on deposits. In earlier reports the FPP have also explored how the persistent low interest rate environment after the 2008 crisis drove lower profits in the banking sector. However, the Jersey finance sector is increasingly diverse and fund management and administration have grown successfully over time to make a larger contribution. Most importantly I think the banking sector in Jersey can continue to be an exemplar compared to other jurisdictions in terms of continuing to meet international standards around transparency, delivering value for its diverse global client base and building on its success with a market-leading service.

The FPP are also clear that borrowing remains a better option than using reserves. If borrowing is the right route to follow, what scale, and what format is right for Jersey?

The FPP have consistently advised that borrowing is appropriate to finance investment – consistent with the ‘golden rule’ in economics.

In their recent advice the FPP also advise it would be appropriate for Jersey to borrow to smooth the economic cycle.

In an economic downturn government revenue tends to fall e.g. with lower income from employment and profits while government spending, e.g. on social security benefits, tends to rise. Rather than try to balance the books immediately with higher taxes and/or cuts in spending, that would lead to an even deeper recession, it is better to let the ‘automatic fiscal stabilisers’ operate.

In addition, it would also be right to borrow to finance ‘active’ fiscal stimulus with additional measures that aim to mitigate the cyclical downturn in the short-term and reduce the permanent structural damage to the economy in the medium-term. 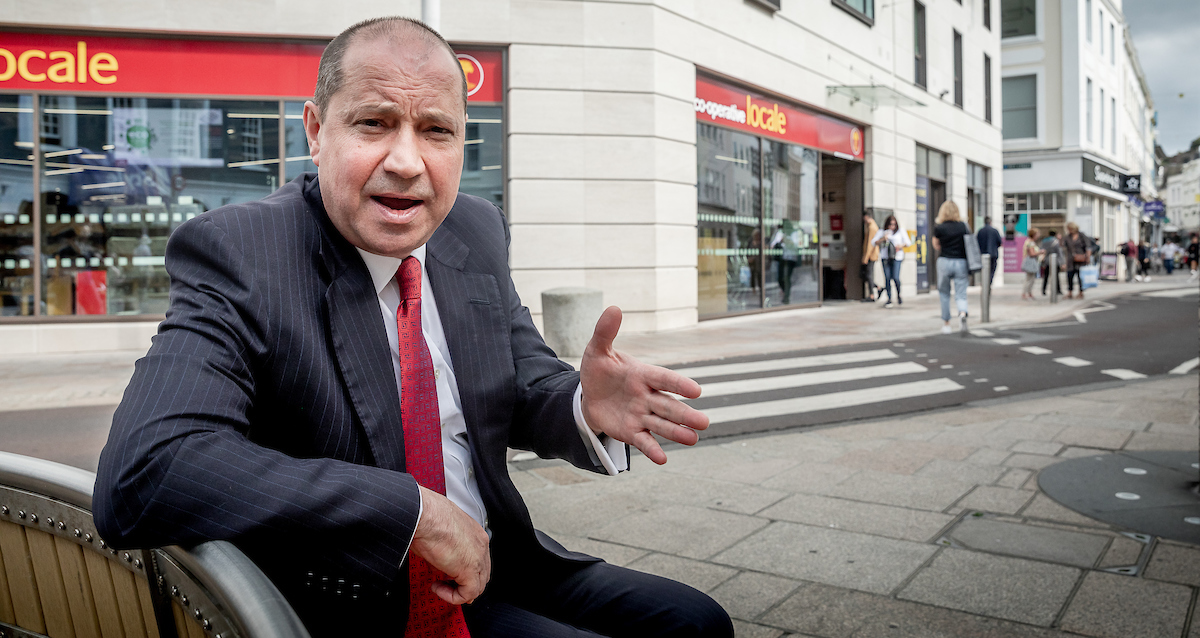 Pictured: "In the medium-term the deficit should be closed as the economy recovers, so the budget is balanced when the economy is back to operating at its full potential."

These cyclical effects on the budget could be financed in Jersey by drawing on the Strategic Reserve but the FPP have also set out, in their 2019 annual report, that the Reserve is probably too small to deal with the fiscal costs of a severe structural crisis.

At the current time, with a number of other risks in the short-term that includes Brexit, my own view is that it makes more sense to retain the Reserve and borrow to deal with the effects of the recession caused by the global covid-19 pandemic. As the FPP advise, borrowing also provides more flexibility between financing options in the future.

In terms of what route to take then in the short-term to deal with the immediate cashflow demands, the flexible £500m revolving credit facility agreed by the Government of Jersey with a consortium of 5 local banks is the right instrument.

In terms of scale additional to any capital spending, that follows from the principles under which it is appropriate to borrow e.g. the temporary cyclical effects on the budget from the recession and covid-19, the liquidity and cashflow measures put in place to support the economy i.e. the deferrals of GST and social security payments, and also the fiscal stimulus package.

In terms of format, then in due course when considering the financing of assets that provide value for decades then it would be appropriate to finance with borrowing of a longer duration, for example through issuing a bond.

With the government deficit now forecast to be around £280m, is it realistic that the island will see a balanced budget within the next five years?

Any forecast government deficit would be set out in the Government Plan 2021-24, but on the basis that there are deficits in the next five years there a number of important points to consider. Budget deficits occur when the revenue received by a government is less than its spending. These deficits may be driven by the economic cycle with weaker revenues and hence are cyclical, or a mismatch between desired expenditure and revenue, and hence structural. 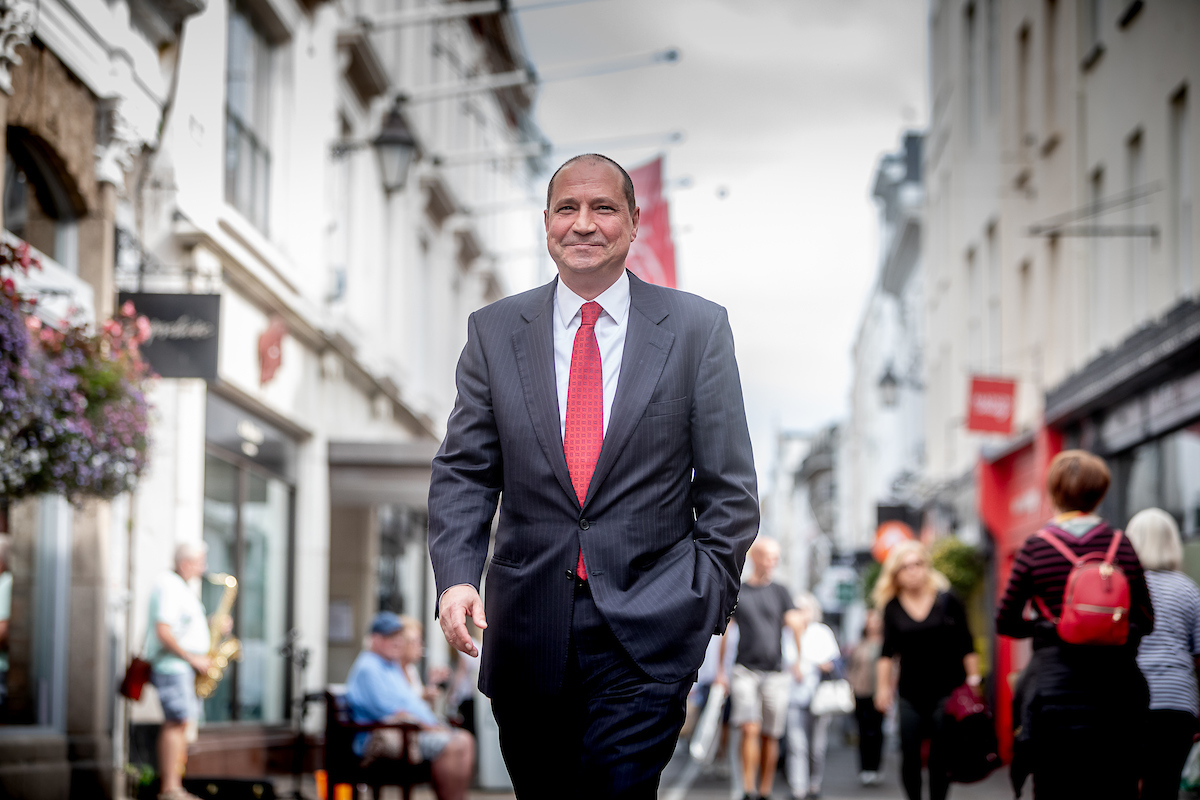 Pictured: "I do think it is realistic to see a balanced budget within the next 5 years with careful planning for spending and developing options for revenue in the medium-term to ensure that the public finances remain on a sustainable footing."

After considering the effects of the economic cycle and what part of the deficit is likely to be temporary, the remaining structural deficit creates a need to take action by increasing income, reducing expenditure, drawing on financial reserves or borrowing to finance the difference.

In the short term the FPP advise that Government should avoid excessive fiscal consolidation, which would intensify the structural impact of the very sharp, short-term, fall in economic activity.

The Government should continue to run deficits to support the economy while it remains in a downturn, but in the medium-term the deficit should be closed as the economy recovers, so the budget is balanced when the economy is back to operating at its full potential.

Clearly, it’s really difficult to predict and be very certain how quickly the economy will recover, but the FPP advise that a prudent approach now would be to aim to close the deficit by the end of the 2021-24 period, with flexibility to revise the pace of fiscal consolidation in either direction as the economy recovers. Much of the deficit reflects large time-limited expenditure driven by covid-19 and the economic consequences.

So, I do think it is realistic to see a balanced budget within the next 5 years with careful planning for spending and developing options for revenue in the medium-term to ensure that the public finances remain on a sustainable footing.