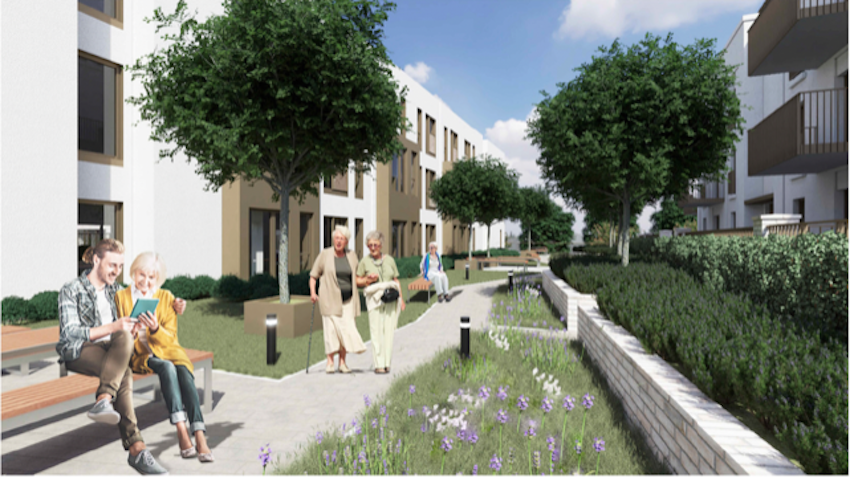 Proposals to create nearly 70 homes and build a ‘Dementia Village’ including a shop, hairdresser and pub on a “redundant commercial site” near Waitrose in St. Saviour have been thrown out by the Planning Committee.

Going against the recommendation of the Planning Department, which was to approve the application, the group of politicians supported plans for the care home but said that the residential units were too small and the block nearest the road was too high.

Dandara had applied to demolish Canning Court, Samuel Le Riche House, a property called Arzl House and former warehouse used by Waitrose and replace them with two blocks of 18 one-bed and 48 two-bed flats, and a three-block ‘village’ to be operated by LV Care Group.

The committee was told that the village concept would be a first for Jersey, based on models successfully used in Europe.

It would comprise of 10 independent-living units, a 57-bed dementia care home and eight units of staff accommodation, designed around a centre ‘street’ complete with its own restaurant, bar, theatre and ‘town hall’.

The committee all expressed its support for the “holistic” nature of the single application, as separate applications for the various elements of the St. Saviour site had been made previously.

Pictured: The application, although rejected, was praised for being the first unified one for the whole site off Plat Douet Road.

The States Members also unanimously supported the dementia village plans and the engagement of the applicant with neighbours, including the next-door primary, whose headteacher spoke in favour of the application at Thursday’s committee meeting.

Deputy Steve Luce said: “I am really struggling with the height of the residential block nearest Plat Douet Road.

"If it came down one storey, I think the application could get over the line.”

Deputy Coles and Curtis, meanwhile, objected to the planned sizes of the flats, which they deemed to be too small. Deputy Howell also had concerns about the lack of play areas for children living in the apartments.

Posted by Private Individual on Dec 9th, 2022
I'm not surprised the head master from Plat Douet School was supporting this application when Dandara was going to give him a free mini bus worth 50K and 5 electric bikes as part deal.

Thank goodness the planning committee saw through the game and stopped this nonsense in its tracks. They have no idea how they are going to get rid of the surface water or the sewage from the site.

What on earth is a pub doing in the middle of a care home!

This is just another ghetto getting built by a building company that has ruined the island with high rise rabbit hutches.
To place a comment please login Login »