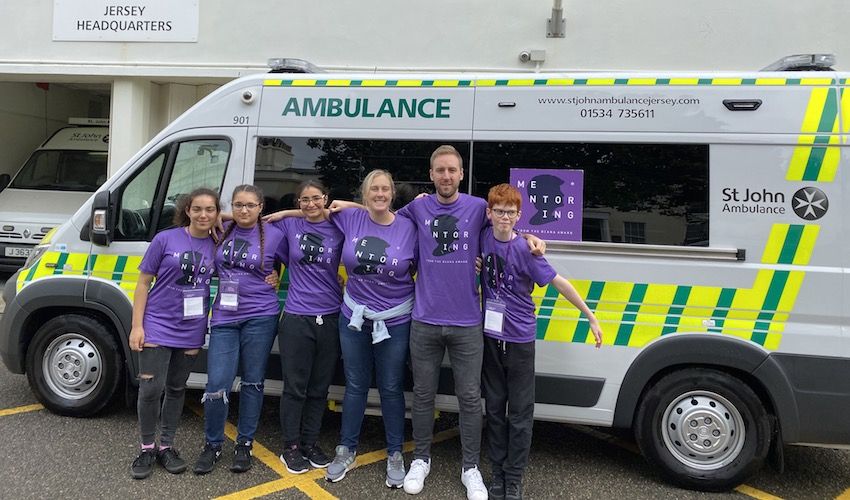 A charity built on the idea that young people have the power to change the world is pairing up Police officers with local teens.

The Diana Award mentoring programme will run for ten months and aims to instil active citizenship in the young people that participate through youth-led social enterprise.

The first year of the programme will see 12 States of Jersey Police Officers being one-to-one mentors to teens aged 14 to 16 selected from across Jersey’s States schools.

The scheme launched this week with team building exercises with the Fire Service, surveys of islanders to find out what they would improve about Jersey and even a ‘Dragon’s Den’-style event with a social enterprise twist.

Pictured: The launch week has seen the mentees work on team-building exercises with the Jersey Fire Service.

The top three initiative ideas pitched at this panel event will be developed throughout the scheme.

Commenting on the programme, Acting Chief Inspector at Jersey Police Mark Hafey said: “We are really proud to be part of such an exciting project. Officers mentoring young people over the ten month period has the potential to make a real difference and result in some positive, long-lasting relationships. We hope this project will improve communication and our understanding about what’s important to young people and equip those people with leadership skills for their future.

Set up in memory of Diana, Princess of Wales, the charity honours her belief that young people have the power to change the world.

The youth charity runs three key programmes, which include an intervention based mentoring programme, a youth-led anti-bullying campaign and a prestigious international award which publicly recognises young change makers.

Tessy Ojo, CEO of The Diana Award, said: “We’re delighted to be working with the States of Jersey Police on our mentoring campaign, kindly sponsored by HSBC and expanding our reach to Jersey. Our mentoring work is unique in that it places a strong emphasis on social action; mentors and mentees work together to develop a campaign around a social issue that affects their community. This two-pronged approach prepares the young people for their post-secondary future whilst also instilling a sense of active citizenship."

Local Diana Award recipient, Tom Hughes, added: “This programme is an exciting opportunity for our island, and I am happy after ten months of work that it has finally come together – hopefully it will give young people a role model in their lives who can offer additional support and guidance to them.

“I look forward to the coming weeks and months ahead and seeing how young people use this programme to create positive change through social action.”