Posties sorted thanks to new machine 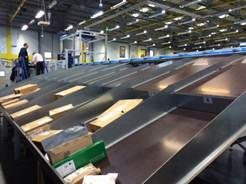 Posties sorted thanks to new machine

We're getting more parcels and presents delivered than we were last year and posties have got a new machine to help them sort them all out quicker.

The automatic sorter at Rue des Pres can sort 4,500 items per hour into its 148 chutes.

There are 168 individual trays that carry the packages around a 48 metre carousel - not only sorting them but weighing them and calculating the volumetric dimensions of each individual item and helping posties work out whether they are going to deliver them by van, by bike or on foot.

The start of the month has seen the team process and deliver 220,000 packets and parcels up until 15 December - up 12% on last year. The teams have been focusing on making sure packets and parcels get to customers as quickly as possible and Jersey Post say it's now delivering almost 95% of items the first time round.

They haven't had so many cards and letters to deliver though with volumes still declining significantly. There's been a 9% decline year on year with in excess of 120,000 fewer items.

Posted by richard davy on Dec 21st, 2015
Not much point if you don't have the staff to deliver them.......been waiting for several parcels for several days now.....queens road area (!)..
To place a comment please login Login »

POLL: Which retailers would you like see deliver to Jersey?