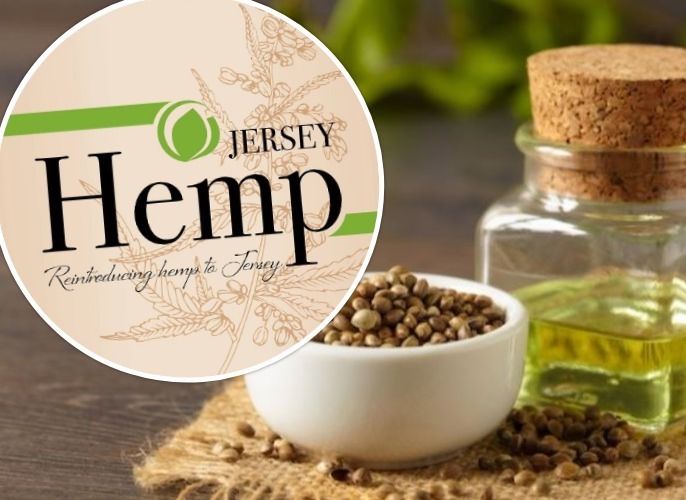 A site once shortlisted to become the future £466million hospital has been revealed as the ‘top secret’ location of a States-backed hemp farm – run by three former firefighters.

Warwick Farm-based ‘Jersey Hemp’ officially launched over the weekend after months of work.

Supported by the States of Jersey in a bid to diversify the island’s rural economy, the company planted the first crop of industrial hemp in May 2017.

Now, nearly a year later, it has been harvested and turned into ‘Genuine Jersey’ cooking oil and CBD oil, a nutritional supplement.

Visiting members of the British-Irish Council were treated to a sneak preview sample last year, but the products were officially unveiled at the Lifestyle Show on Saturday.

The revelation puts an end to years of speculation over the future of the former States Nursery site.

It was shortlisted in 2012 as a potential site for the £466million Future Hospital, but was rejected for having “poor public and emergency access” and being “out of keeping with surroundings.” It was then rediscussed as an option in 2016 after People's Park was knocked off the list.

It was then revealed last September that the site would be handed to a mystery tenant for a nine-year period.

The news aroused the frustrations of St. Helier Constable Simon Crowcroft, who made a thwarted bid for the site to become part of a parish country park.

The trio’s hemp journey began while researching combustible building materials. They then discovered ‘Hempcrete’ – a material made from the plant’s woody core mixed with water and lime, which is fire resistant and does not produce toxic smoke.

According to the company website, Jersey Hemp fibre could, in time, be used to make building materials, as well as insulation, fabrics and animal bedding.

The plant’s seeds, meanwhile, can be ground to create oils for use in cooking, beauty and nutritional products, such as CBD oil, which is believed by some to relieve symptoms of pain and anxiety, and even combat cancer.

20ml bottles of the cannabinoid substance, which does not produce psycho-active effects, are being sold for £60, while 100ml of Jersey Hemp’s cold-pressed culinary oil is priced at £3.

Environment Department officials also reported environmental benefits from the plantation, as the growers do not use pesticides or fertilisers. The crop, which can reach heights of 12 feet and requires specialist harvesting equipment, also absorbs nitrogen left behind in the soil from previous plantations. Insects benefit too from the large amounts of pollen it produces.

Such practices mean that around 10% of the land has organic certification or certification in progress, with the remainder sourced from local farmers who rotate it with their potato crops.

The product marks the start of a resurgence in Jersey hemp-growing after a century-long break. The island was once home to many hemp fields, supplying ships with fibre for sales and rope – particularly around Les Quennevais, whose name is derived from the Jèrriais for a land where hemp is grown.

Jersey Hemp say that the island is well-suited to growing the plant due to its “fertile soils and distinct micro-climate.”

It is for that reason, they say, that Jersey Hemp yielded 30% more fibre and seed than similar varieties in the UK.

The company’s mission statement reads: “Jersey Hemp aims to revitalise the cultivation of hemp within the island, whilst exploiting many of the industrial applications of the plant and increasing the diversity of Jersey's agricultural industry.”