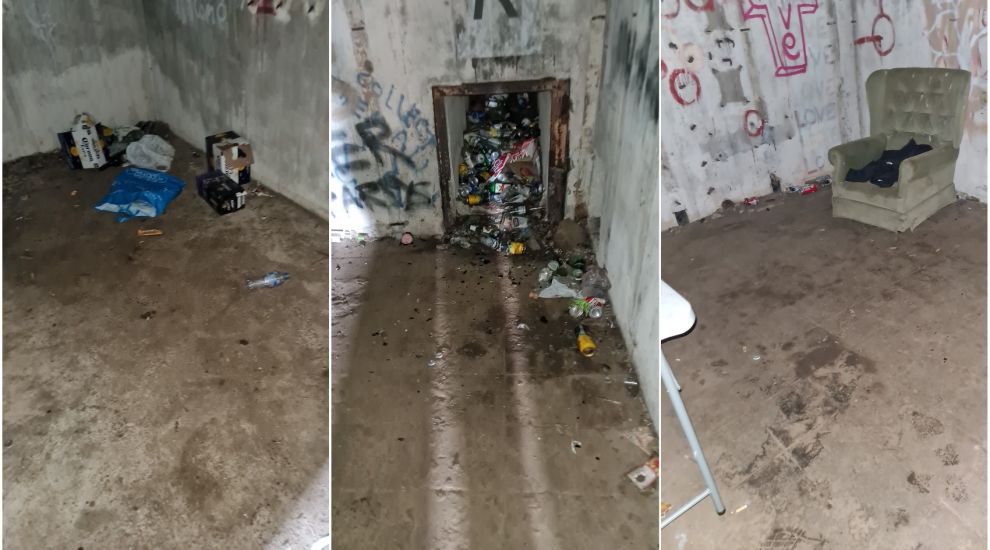 Jersey's Occupation Society has condemned the organisers of an apparent bunker party, after a mass of litter and a power generator were discovered at La Pulente on New Year's Day.

Anti-litter campaigners found the mess on Friday, later uploading images to Facebook page ‘St Brelades/Say No to littering’ showing discarded bottles and cans, as well as the abandoned power source.

Police said the incident was dealt with by the Parish with the help of its new Community Officer. Express understands no further investigations are ongoing.

Following the finding, the Channel Islands Occupation Society - a group of local history enthusiasts who work to maintain and protect the historic structures - told Express: “Bunker parties are nothing new; they have been happening in some shape or form ever since the Liberation, and their heyday was probably during the ‘60s and ‘70s

“However, whilst these clandestine gatherings may sound exciting, they pose a serious risk to health and safety, and should be avoided."

Pictured: An abandoned generator was discovered nearby.

They continued: “Derelict bunkers are inherently dangerous, with unguarded drops, open drains and jagged metal waiting to catch out the unwary. There can also be a lot of unsavoury items underfoot, and other hazards include flooding and poor air quality.

“The bunkers at La Pulente have been a popular target for parties over the years, and are heavily vandalised. It is sad to see them in such a filthy and unsightly condition, daubed with graffiti, and scattered with litter and discarded furniture.

“This also detracts from the natural beauty of the surrounding area, which can hardly be a good advertisement for Jersey as a “green” tourist destination. Sealing up the bunkers to protect them from further degradation is probably the only option.”

4Hire, whose generator was rented out, did not wish to comment.

Posted by Scott Mills on Jan 8th, 2021
Can't believe the Police wouldn't have visited this obvious party site on new year's eve. And don't let them win by blocking these bunkers up, always the first option with things that happen in Jersey (portelet common springs to mind!!!). And on another note, that is definitely not Graffiti, to say so is a diservice to talented "writers/taggers" out there
Posted by Private Individual on Jan 11th, 2021
This behaviour is why we are all in lockdown again. Businesses are failing and people are losing jobs because of idiots like these.

Fine them and jail them that is the only thing they will understand.

Disgusting, when I have seen people lose jobs this year simply because these morons will not adhere to a simple instruction.
To place a comment please login Login »