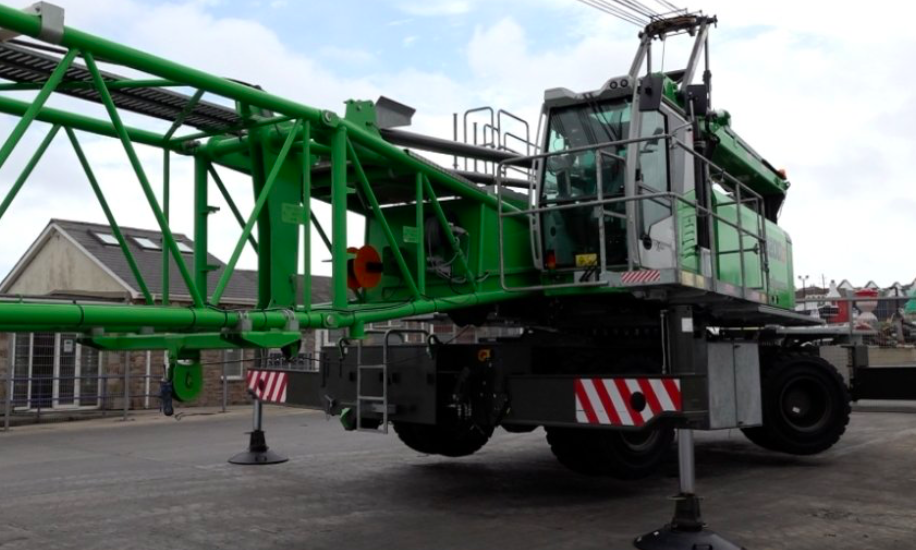 Alderney politicians are raising the alarm about the island’s £800,000 new lifeline crane being left out in the rain.

The crane at Braye Harbour is an essential part of Alderney's infrastructure, used throughout the year to offload food, supplies and building materials from cargo ships.

The island's previous crane failed prematurely after being poorly maintained, including being corroded by exposure to salt water.

Some politicians in Alderney and Guernsey now fear the same thing will happen to the replacement crane after seeing it left out next to sea water in stormy conditions despite it having wheels which allow it to be moved into more appropriate storage when not in use.

The Alderney Representatives in the States' Assembly in Guernsey are strongly critical of how the crane is being left when not in use. Alex Snowdon said it was "absolutely ridiculous" and Steve Roberts said there had been "no past lessons learned".

When Guernsey authorised spending £800,000 to be spent on the crane, which was delivered to Alderney in January this year, it was on the condition that the authorities in Alderney would improve maintenance of the crane, protect Guernsey's investment and ensure the crane was able to see out its expected lifespan.

Mr Snowden and Mr Roberts say that this condition is not currently being met. They say the crane has remained on the quay in all weather conditions since it arrived in the island.

Pictured: Deputy Gavin St Pier was President of the Policy and Resources Committee when it authorised the purchase of a new crane but made it conditional on Alderney maintaining it more carefully.

“Leaving it on the quay during these weather conditions is absolutely ridiculous,” said Mr Snowdon. "It’s just going to rust away and not be fit for purpose when needed. In my opinion it reduces its lifespan considerably.”

The States of Alderney's General Services Committee is responsible for activities at Braye Harbour. Mr Snowdon said the Committee had made a resolution to allow the crane to be driven away from the quay when not in use.

“This one has wheels specifically so it can be wheeled off the quay and out of the Harbour during bad weather – therefore protecting it somewhat. It’s disappointing that the Harbour Office is not actioning the decision of the Committee," said Mr Snowdon.

Mr Roberts, who is a member of the Committee, said he expects politicians in Guernsey to be unimpressed.

“I’m sure Guernsey is watching closely after authorising that sort of money – we need to protect the crane,” said Mr Roberts.

“It clearly has not been maintained. It has been left with no thought of the past - with no past lessons learned."

Alderney’s new crane corrodes in the breakwater salt rain all weekend .
Unused and left on quay.
Nearly a million pound purchase it is heading for a neglected life shortening future, when it should be protected.
We watch Public money rusting away before our eyes. Disgraceful. pic.twitter.com/rUjUz9JSYv

There is a long history of problems affecting cranes at Alderney Harbour.

In 2013, the States of Alderney were fined £20,000 by Guernsey's Royal Court for health and safety breaches after the previous crane broke while loading.

Last year, essential supplies could not be landed in the island on two occasions when the previous crane broke down just before it was replaced.

In July this year, the new crane brown down twice in the space of a few days and another crane had to be temporarily loaned from Jersey.

Express contacted the States of Alderney for comment but had not received a reply at the time of publication.

Mr Roberts said promises were made of a shed being built at Fort Gronez to house the crane and regretted that plan had been “kicked down the road".