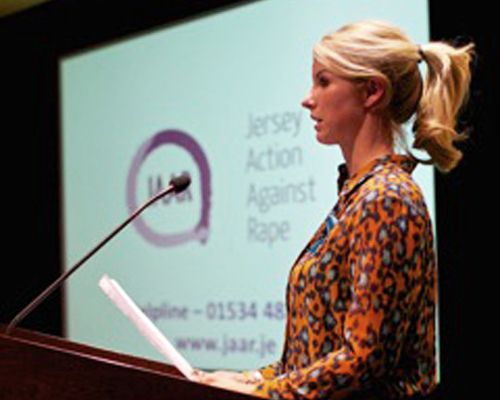 Forty people have contacted a charity set up to support rape survivors since it was formed in January, and eight women are currently receiving counselling from them.

Jersey Action Against Rape was set up by Cassidy McIntosh (27) who was raped by a family friend in 2012 – and they want to use April as an awareness month to build awareness about rape, about the consequences of rape and about the support that is available to rape survivors.

JAAR say that they have been “staggered” by the response that they have had since they were set up by Cassidy, who used the civil settlement from her attacker to establish the group.

She took the first civil action for rape that has ever gone through the Jersey courts after police said they could not get the evidence to prosecute the man who raped her.

Extrapolating from UK figures, there are thought to be around 800 sexual assaults on women and 130 on men every single year in Jersey – but in 2012 only 12 rapes were reported to the States of Jersey Police.

Sara McIntosh of JAAR said that they wanted to help the Island confront myths about rape that are still prevalent in society.

She said: “Rape can take many forms with the facts often lost in the many myths that surround the criminal act of a sexual crime.

“Since the launch of JAAR the response from survivors of rape in Jersey has been staggering. We know this is not reflected in the profile it commands in the Island and this awareness month provides a valuable opportunity to focus our attention as a community and remove those myths.

“In simple terms, a myth is a false idea that people believe to be true. In many societies all over the world, people have believed, and still believe, in myths about what rape is and what causes it.

“Recent headlines that have dominated the UK media have made that point. We hope, during April, to clearly reject those myths and make rape a subject we are prepared to face head-on.”

What JAAR say about rape myths…

Myths make people doubt what the victim says. We think that “he or she was not really raped”. This can mean that the victim does not get the support they need from people around them. It can also make officials in the criminal justice system doubt their testimony, preventing justice from being done.

Myths make rape survivors feel too ashamed or too guilty to report the rape or to share it with friends and family. The survivor ends up isolated and does not get the support he or she needs to help them recover from the trauma of the rape.

Myths hide the fact that a rapist can come from any race, social class or environment. It makes us feel more distrustful or afraid of certain people based on stereotypes and prejudice, not based on the facts of the situation. It makes us believe that we can tell what makes someone a rapist when this is not the case.

Myths make us believe that we can prevent rape from happening to us. This stops us from addressing the real sources of the problem, for example people’s attitudes to violence and to relationships between men and women, also known as gender relations.

Myths take away the dignity and humanity of the survivor, causing them more trauma and pain and lowering his or her chances of recovery. Myths also prevent many rapists from being prosecuted. It is vital that all of us in society reject these myths, so that survivors may fully recover and more rapists be convicted. Many of these myths and facts refer to rape between a man and a woman and the ideas that people have about this. It is important to realise that rape can happen between same sex partners as well and that thinking that rape can only happen between a man and a woman is also a myth. In certain rare instances women have been known to rape men. This is the exception rather than the rule and so we base our comments on rape between a man and a woman realising that each rape is unique even as we generalise about it.

MYTH: The woman did not get hurt or fight back. It couldn’t have been rape.

FACT: People who rape or sexually assault will often use emotional manipulation, weapons or threats of violence to intimidate their victim. The fact that there is no visible evidence of violence does not mean that someone has not been raped. Faced with the reality of rape, people make second by second decisions, all of which are directed at minimising the harm done to them. At the point where initial resistance, struggling, reasoning etc. have failed, the fear of further violence often limits a person’s physical resistance. The only form of control that seems available to a person at this point is limiting the harm done to them. Many people who experience sexual violence describe freezing or feeling paralysed with shock or fear.

MYTH: Women are most likely to be raped outside, by strangers in dark alleyways.

FACT: Women are often advised to avoid sexual violence by never walking alone at night. But in fact, only around 10% of rapes are committed by “strangers”. Around 90% of rapes are committed by known men; someone who the survivor has previously known, trusted, often even loved. People are raped in their homes, their workplaces and other settings where they have previously felt safe. Sometimes, the myth that rape is most commonly perpetrated by strangers can make the majority of survivors, who have been raped or sexually assaulted by someone they know, even less likely to report to the police or even confide in someone close about their experiences, for fear of not being believed, out of a sense of shame or self-blame, and/or because they have mixed feelings about getting the perpetrator ‘into trouble’.

MYTH: If the victim didn’t complain immediately it wasn’t rape

FACT: The trauma of rape can cause feelings of shame and guilt which might inhibit a victim from making a complaint. This fact was recognised by the Court of Appeal in R v D (JA) October 24 2008, where it was held that judges are entitled to direct juries that due to shame and shock, victims of rape might not complain for some time, and that a late complaint does not mean that it’s a false complaint.

FACT: Many people believe that only a certain “type” of woman is in danger of being raped or sexually assaulted. In fact, people, and especially women and girls, of all ages, classes, culture, ability, sexuality, race and faith are raped.

Some men joke or make comments about a woman’s appearance or age to indicate whether she is sexually desirable or available. But the perceived “attractiveness” of a victim has very little to do with sexual violence. Rape is an act of violence not sex.

FACT: If a person is unconscious or their judgement is impaired by alcohol or drugs, legally they are unable to give consent. Having non-consensual sex with a person who is intoxicated is rape. Rapists use a variety of excuses to attempt to discredit the women they rape and to justify their crimes. But no-one asks or deserves to be raped or sexually assaulted and 100% of the responsibility for any act of sexual violence lies with its perpetrator.

COMMENT: "The days of burying our heads in the sand are over"