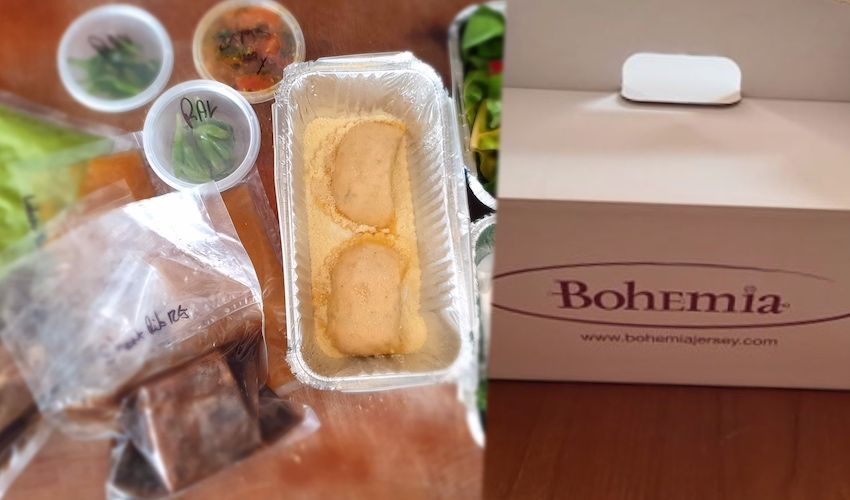 With all restaurants, cafés and pubs closed during lockdown, a local food critic has turned to takeaways to shake up the routine of home cooked meals.

Strictly anonymous, definitely unpaid and totally independent, Harry Smiles has very high standards, which he expects the people cooking his food to beat.

Last weekend, he tried out Bohemia, an unlikely candidate for home deliveries, whose offering involved more preparation than your usual takeaway...

"Over the last few weeks, many restaurants, cafés and even hotels have been offering takeaways in the hope of generating some income under lockdown. 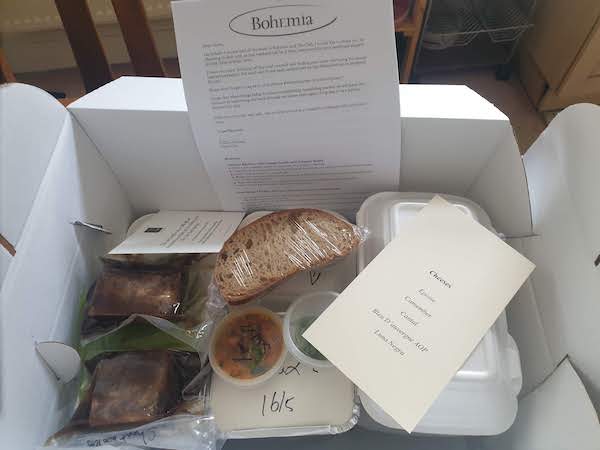 Pictured: Who would have ever dreamed of ordering ‘cheeky takeaway’ from Bohemia?

This included businesses who may have considered delivering before, but never took the plunge, until a certain virus forced their hand - but also some whom you would have never imagined ordering a ‘cheeky takeaway’ from.

Bohemia is one of the latter.

I was intrigued to hear that the Michelin-starred restaurant, known for its high-end cuisine and (among my friends at least) for being posh, was now offering a delivery service.

Ever the culinary adventurer, I jumped on the opportunity to try Bohemia@Home. 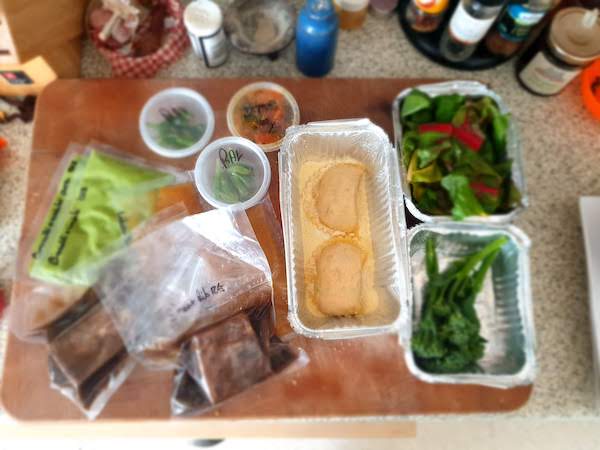 Pictured: This takeaway comes in a kit.

I set my sights on a lobster raviolo with its broth and tomato salad for starters, followed by braised beef with broccoli and wasabi puree, broccoli tender stem and rainbow chard for the mains, and a pistacchio/raspberry Paris Brest for dessert.

The instructions promised to help me “find my inner chef” in simple steps, so I felt fairly confident I could nail it.

Now, I consider myself a good cook, but, trust me, a child with no previous cooking experience could have managed it.

The only time I got confused was when the instructions mentioned a vegetable broth that was nowhere to be found in the box – luckily, I always have some in the cupboard. 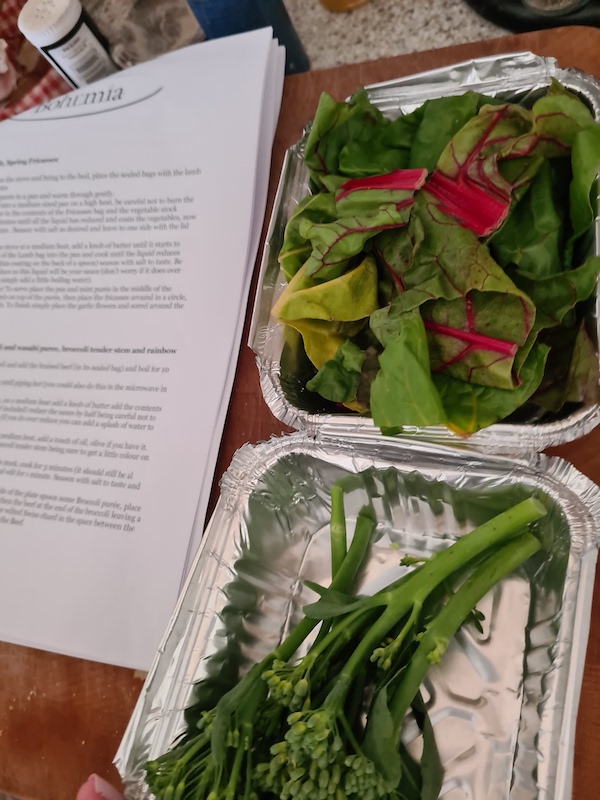 Pictured: "The instructions promised to help me “find my inner chef” in simple steps."

Finishing off the starters and mains was honestly a breeze.

I will happily admit that dishing it up to make it look as nice and elegant, as it would normally, was the hardest part.

From a gastronomic point of view, me and my main squeeze were both pleasantly surprised.

This was by far the most refined takeaway dinner we’ve ever had. 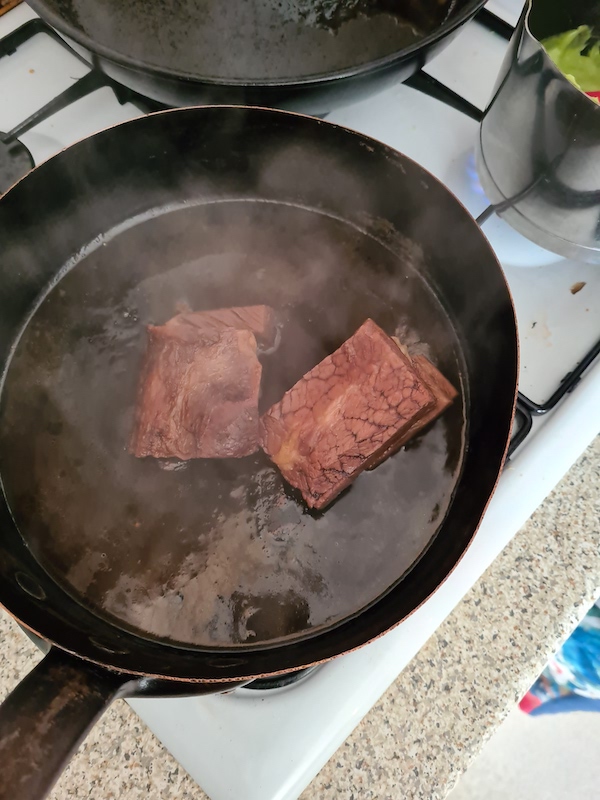 Pictured: Cooking beef in a pan? I can manage that!

I cannot compare it to the in-house quality, as I have never set foot in Bohemia – I never really considered it ‘my scene’, but I am starting to think I might be missing out on something.

The lobster raviolo was amazing - it had the perfect texture and you could actually see bits of lobster in it, rather than mushed up bits and pieces.

The tomato salad complimented the broth nicely and it was all over too soon.

I wouldn’t have said “no” to a second helping of this one. 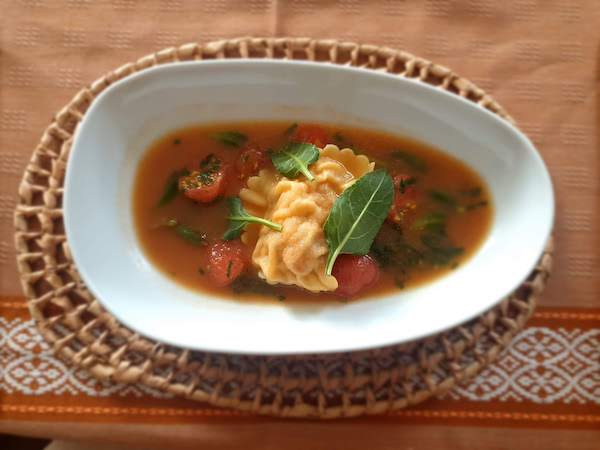 Pictured: The lobster ravioli I wish had been ravioli.

The braised beef was very tender and cooked to perfection (I can say that since I was the one to finish the cooking!).

It was, however, a bit on the salty side for me.

But the broccoli and wasabi purée was heavenly.

Perfectly smooth and super tasty, I also found myself wishing for more of it. 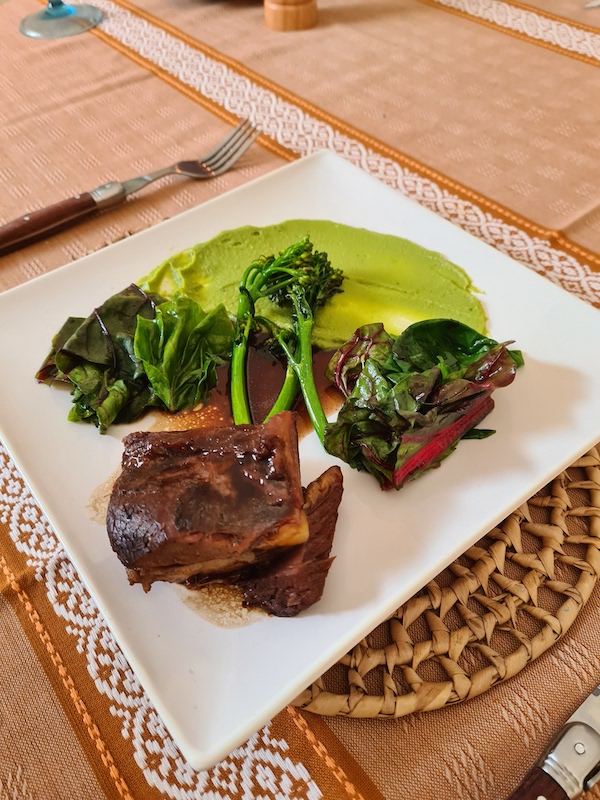 Pictured: It's harder than it looks to dish up with gusto.

I obviously had to go for the four-course option because it was the only one with cheese. So, after our beef, we had the pleasure of munching on a selection of a deliciously smelly selection.

Bonus: it came with two slices of bread. My partner maintained this was to go with the broth, but I stuck with my first (and right) idea and saved my slice for the cheese board.

When I first opened the box, I have to admit I was a bit disappointed by the portion sizes. I genuinely saw myself having to cook a second dinner to fill my belly up.

In the end, there was no need - by the time the cheeseboard was gone, I would have had to loosen my belt… had I been wearing one in the first place. 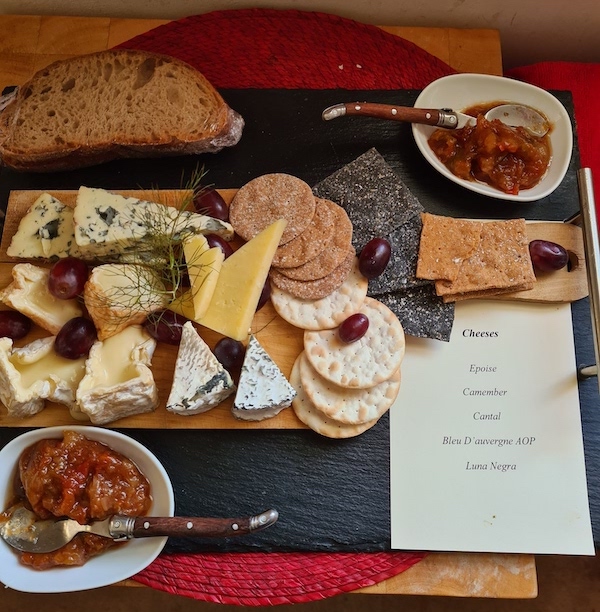 Pictured: A cheese board after my own heart.

My sweet tooth meant that I could not pass on the Paris Brest and its appealing bright green and pink colours.

Its mix of sweetness and tanginess was the ideal note to end the meal on.

The pastry was crisp, the cream was whipped to perfection, and the crunchy pistachio bits and sugary shells laid within the layers were pleasantly surprising – in one word: it was perfect.

All in all, the dinner felt like a treat, made all the more appreciable by the fact we haven’t been able to go out the past two months. 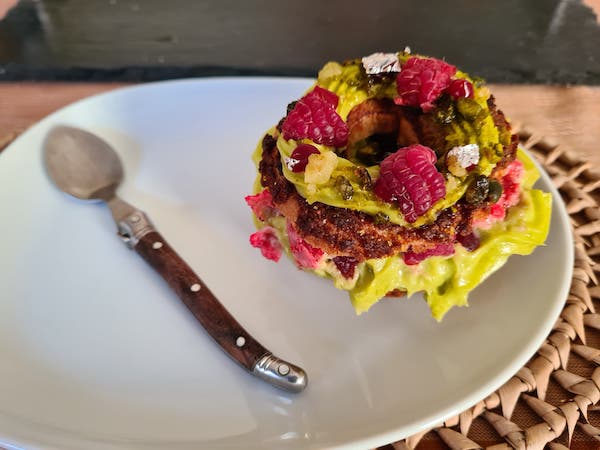 Pictured: Get in my belly!

Although it required slightly more work than a regular take away, the scrumptious flavours more than made up for it.

Maybe I should turn my living room into a Bohemia branch?"

Posted by Scott Mills on May 20th, 2020
a take away where you have to cook it....what's the point!!! no thanks. They've just nicked hello fresh idea...which provides all you need to cook, not expecting you to have jamie oliver's cupboards.
Posted by Tom Hunts on May 20th, 2020
We had one of these two weeks ago they are brilliant the lamb mains were amazing. it is so easy to finish off the dishes and they are out of this world. You are not really cooking the meal just finishing off the dishes that have been prepared so you have the most tender lamb in an amazing jus and sauce that you could never cook at home, or at least most people bar top chefs could never create at home. We had a terrine to start which takes minutes to plate and a salted carmel desert. To the previous comment they are nothing like hello fresh these are dishes that have all be prepared and you finish them. the work that must go into each dishes before it is sent I can't imagine as I have never had a dishes like that outside Michelin starred restaurants how they do it I don't know. Highly recommend for a treat or special occasion at home.
To place a comment please login Login »

“Grandparents can once again hug their grandchildren”