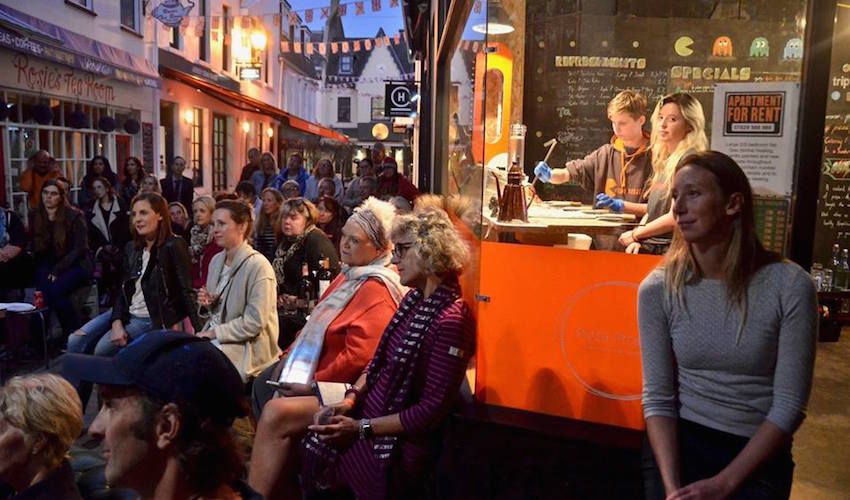 Poetry-lovers gathering for an evening of al fresco rhymes, over a buffet of all-you-can-eat pizza, was all that was 'kneaded' on the first day of this year’s literary festival.

The up-and-coming Pizza Projekt was the venue of one of the first events at the Jersey Festival of Words, showcasing the talents of UK poetry slam pioneers, Farrago Poetry.

John Paul O’Neill, the brains behind Farrago, was the charismatic compére of the evening.

He instantly created an air of familiarity between himself and the audience as he commanded a laid-back confidence both in the performance of his own poetry and his hosting of the event.

The small, cobbled street outside the 80s themed pizza café transformed into an intimate venue as local poets got up to perform their work alongside John Paul and the Cambridge poetry slam champion, Anna McCrory.

Anna’s work was humble and witty as she slipped seamlessly from conversation with the audience into her verse, performing poems about Argos, Beyoncé and the unique solidarity which exists between fellow geeks.

Commenting on the evening, the former President of the Oxford University Poetry Society said: “It was exactly the right vibe for poetry. Lots of people think poetry is incredibly stuffy and if they come to a poetry evening they’ll have to behave and sit up straight all night, but it’s nothing like that at all. It was great to see people having a nice time.”

John Paul was also really pleased with how the evening went. He told Express: “People have this preconception that poetry is pompous, but it’s an Ancient form that’s older than writing itself... Slam poetry is all about stripping it back to that – that we all have this commonality - and it’s about that engagement.

“It was also lovely to have a space where local poets feel happy enough and safe enough to get up and read their own work.”

Well-known Jersey poets such Juliette Hart and Judy Mantle also shared their work alongside people who said they had never shared their poetry with anyone before, but all were cheered on by the crowd in true poetry slam fashion.

Whilst on the island, John Paul and Anna are working with students in year nine who will compete in their very first poetry slam at 15:30 this afternoon at the Jersey Opera House.

Commenting on working with these young people to write their first slam poems, Anna said: “They’ve produced some genuinely wonderful stuff. Some of it is so abstract, others are deep and dark and some is really political so there’s an amazing breadth to their work.”

The Festival of Words continues over the weekend.