RNLI dispute: "Faults on both sides" led to coxswain's dismissal 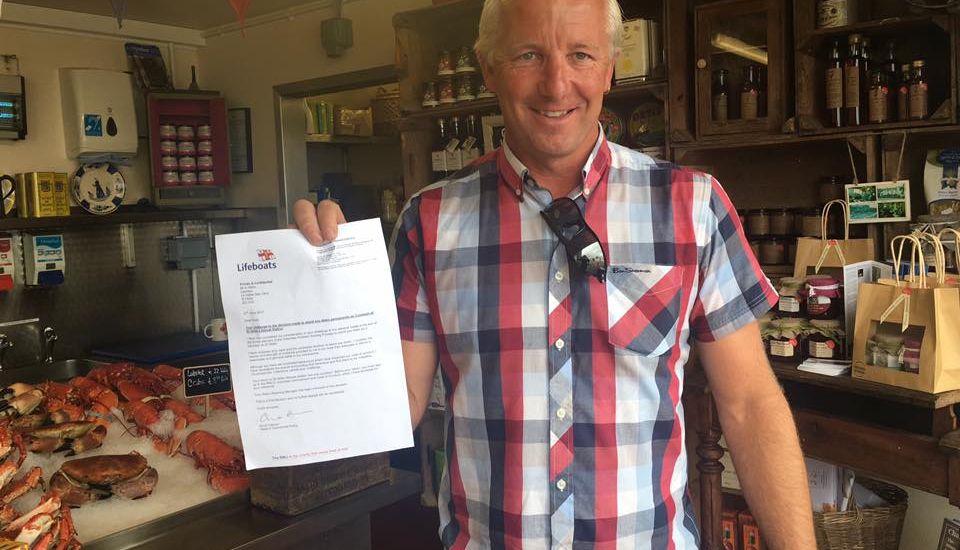 RNLI dispute: "Faults on both sides" led to coxswain's dismissal

The RNLI has admitted it did not meet its own "high standards of support and fairness" causing a "breakdown in relationships" which eventually led to the St. Helier Lifeboat coxswain, Andy Hibbs, to be dismissed in April.

Andy Hibbs was officially reinstated yesterday following a two-month dispute and received a letter of apology from the charity.

The official statement from the charity read: "The investigation found that on a previous occasion, the RNLI did not meet the high standards of support and fairness that we expect and this contributed to the subsequent breakdown in relationships. Because of this, while the recent decision to stand down Andy would ordinarily be justified, the review recognises that Andy’s behaviour could be attributed to previous actions by the RNLI and upheld his challenge to the decision." 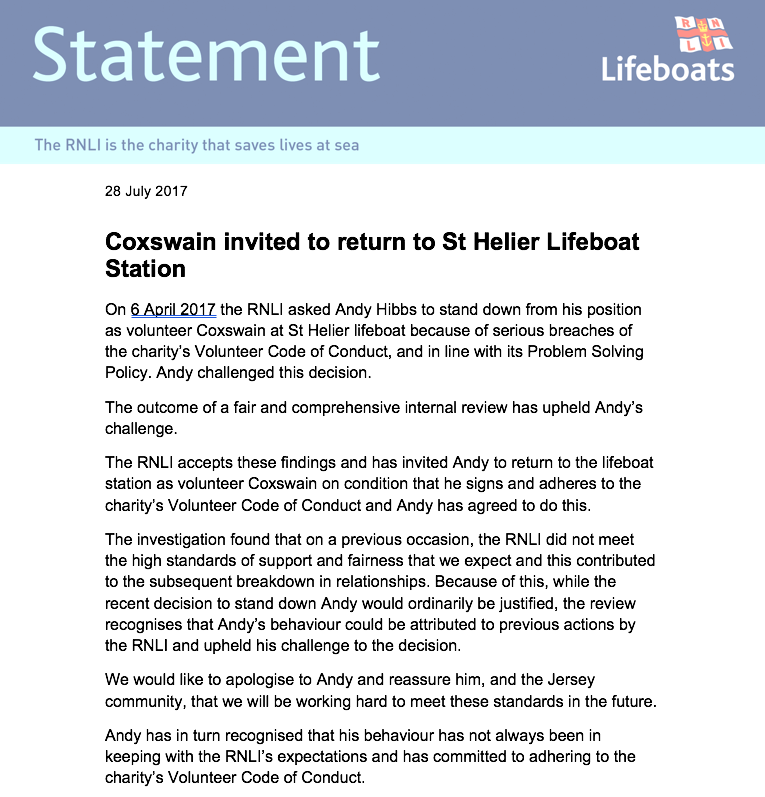 Pictured: An extract of the statement published by the RNLI on Wednesday.

Will Stephens, the RNLI Head of Lifesaving Delivery, came to the island on Wednesday to meet Mr Hibbs and announce the outcome of the two-month investigation. He told Express: "We have done a very thorough and robust review of Andy's appeal and what we found is that, whilst Andy's behaviour normally would have led us to standing him down - which is the action that was taken-, actually there are other factors from previous actions from the RNLI that contributed towards his behaviour.

"We have to take our responsibility for that so we are owning up in saying that there is faults on both sides here. I have apologised to Andy personally but, from me and on behalf of the organisation, we are really keen to work with him now to move forward and say 'We realised that we are both in the wrong here, what can we do now to move forward to bring the volunteer crew back here to service in St Helier?'" 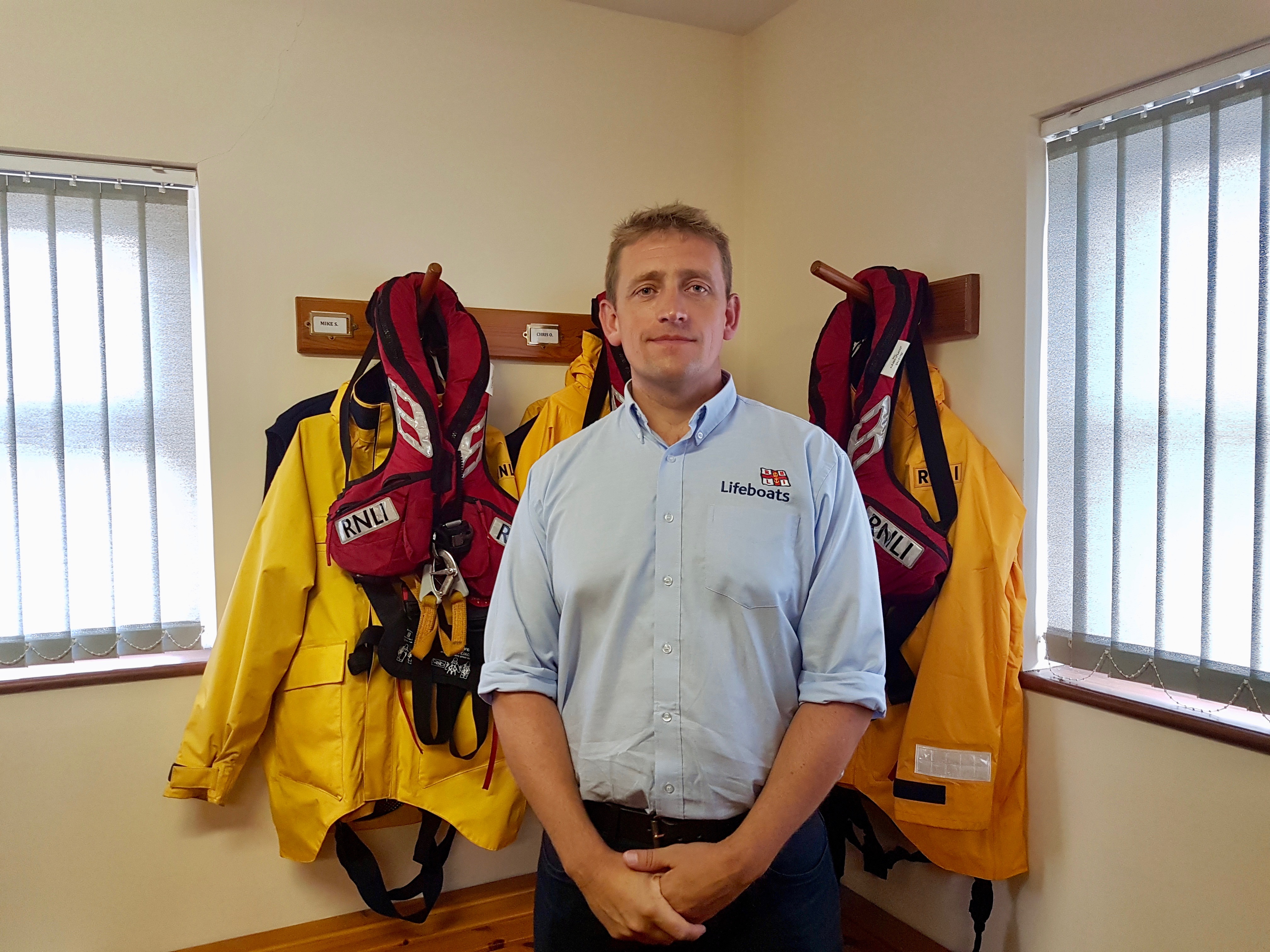 Pictured: Will Stephens, the RNLI Head of Lifesaving Delivery came to Jersey to meet with Andy Hibbs and the Lifeboat crew.

The charity refuses to discuss "individual aspects" and explain what they did wrong, or what exactly led to Mr Hibbs's dismissal: "Andy has acknowledged that his behaviour wasn't in line with the code of conduct but equally we have acknowledged that there have been actions from the RNLI in the past that have exacerbated that as well. We got some things wrong and Andy also acknowledges his behaviour could have been better.

"We are now both acknowledging that breakdown in relationship and we are going to work to rebuild that relationship between ourselves, the RNLI management, Andy, the local crew and also those involved in the Search and Rescue service here, the Ports of Jersey, the States of Jersey, the coastguards. We all need to work together to provide this service as effectively as possible."

Following the internal review, the RNLI is planning to implement changes to make sure the situation does not arise again. One of the first things they will do is appoint a full-time station manager in St. Helier. Mr Stephens said: "Andy said he wants to get on with being a coxswain on the lifeboat, so there is a lot that needs to be done in terms of station management. We are going to bring in a full-time station manager to make sure we can do all the assurance that is required, and that we are managing the competency of the crew here, and to take away the administration of the station from the local crew so they can get on with saving lives on the lifeboat.

"We are going to work with the States of Jersey and the Ports of Jersey to see what that role can do for us all as we start to look at the search and rescue aspect we need to deliver here in St. Helier."

Captain Bill Sadler, Jersey's Harbourmaster, welcomed the announcement saying they were "pleased the RNLI has reached a resolution, which will allow the crew to return to service." "We look forward to working with the crew, the RNLI and States of Jersey to deliver the best possible professional life saving operation for the Island.

"We appreciate the patience that the St Helier crew has shown throughout this difficult period. We’re also thankful to the RNLI for the provision of relief lifeboat crew for St Helier Station to maintain some life boat capability during this period of uncertainty. We are delighted to have the full complement of RNLI assets in a fully operational St Helier Station. Together with the RNLI, States of Jersey and St Helier Station we are clearly into a new chapter and are fully committed to renewing relationships across all levels as we move forward”

As the RNLI says they will start the recruitment for the position "as soon as possible," they have announced one of their staff coxswains will stay at the St. Helier station for a month to help with the transition.

Mr Stephens explained: "We are going to completely review our ways of working and processes. We want to be supportive and fair in everything that we do. It's now my responsibility to acknowledge some of the faults on our side and to review those processes. We will absolutely make sure we learn the lesson about supporting people fairly in the way they should be treated so we don't end up in the same situation again." 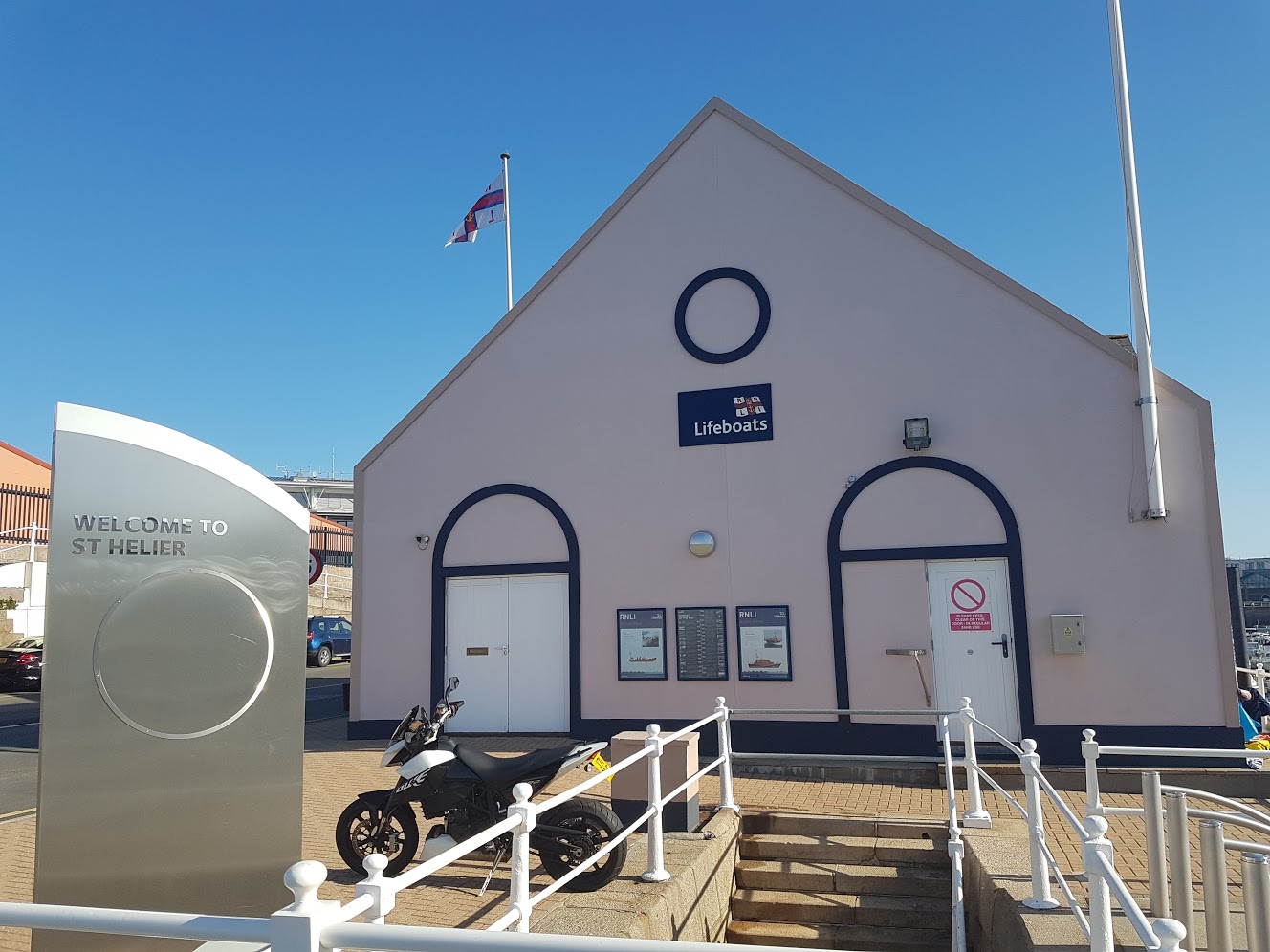 Pictured: A full-time station manager will soon be appointed at the St. Helier Lifeboat Station.

The RNLI representative also apologised to Islanders for the delay in bringing the dispute to a conclusion. He said: "I am really sorry it's been such a difficult time for the people in Jersey. The RNLI is absolutely committed to running a safe and effective service here in St. Helier and St. Catherine and with the lifeguard service as well.

"I know people might be looking at the RNLI thinking 'What on earth are they doing?' but what are we doing is making sure that, when there are allegations and we need to investigate potential breaches in our code of conduct, we do, so that we know we are providing a safe and effective service. Whilst it has been difficult, it is right that we, as an organisation, investigate potential breaches of our code of conduct."

Following his meeting with Andy Hibbs, Will Stephens also met with the crew, who have yet to announce if they will return. He said: "The crew are welcome back anytime. I know this has been a really difficult time for the crew and I have apologised to them.

"I respect their decision to walk out with their coxswain but at this point what I am saying is 'This is your station, we want to have a volunteer service back on." I will ask them how we can get them back on in service as a volunteer crew with Andy as your coxswain."