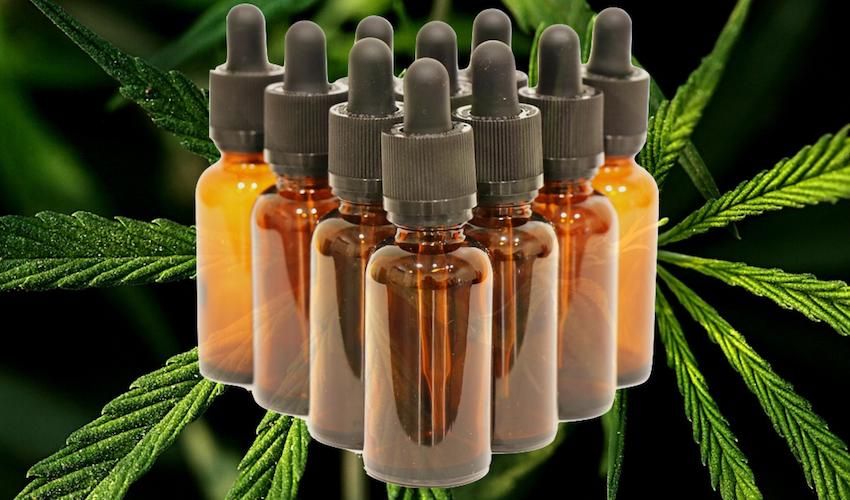 More cannabis-derived supplements are set to become available over the counter in Jersey after the Health Minister approved moves to decriminalise products with traces of the drug's psychoactive component.

Oils and food supplements containing CBD (cannabidiol) have been linked with health benefits such as relief from chronic pain, anxiety and some of the symptoms of epilepsy and chemotherapy.

But many of these products have not been made available in Jersey because they have trace elements of cannabis's psychoactive element, THC (tetrahydrocannabinol).

Due to pure THC being a Class A controlled substance, any products that contain even traces of the chemical are currently exempt under the Misuse of Drugs law.

But that now looks set to change. Following a Ministerial Decision signed off earlier this month, law draftsmen are now working on changing the Misuse of Drugs Law to allow islanders to purchase CBD products - even if they contain small amounts of THC.

Pictured: The cannabis plant contains many different chemicals, not all of which prompt psychoactive responses.

The Health Minister, Deputy Richard Renouf, approved the change following a request from Chief Pharmacist Paul McCabe based on advice from the Misuse of Drugs Advisory Council (MDAC), which is tasked with advising the government on ways to prevent the misuse of drugs as well as dealing with social problems connected with drug abuse.

In a report prepared for the Minister, the Chief Pharmacist notes: "Recently there has been increased popular interest in some of the other major cannabinoids, particularly cannabidiol (CBD). A number of health claims have been attributed to consumption of this compound which is generally accepted not to have any significant psychoactive effects...

"There are now numerous CBD products being marketed and sold as dietary supplements. These products are designed for the administration of CBD but almost always contain trace amounts of THC. It is virtually impossible to remove all trace amounts of THC which makes many of these products subject to control under misuse of drugs legislation unless they qualify as an exempt product as defined in the Misuse of Drugs (General Provisions) (Jersey) Order 2009."

Pictured: The MDAC advises the Minister on preventing the misuse of drugs as well as managing social problems connected with drug abuse.

He explained that the Council found that, when it comes to traces of THC, “such quantities would be so small so as not to constitute a risk to health” and therefore deem it “reasonable and proportionate to permit small amounts of THC and other cannabinoids to be present in CBD products sold as food supplements”, given several conditions.

The conditions which a product must meet in order to be exempt from controls are as follows:

Under an amendment to the law now being drafted, CBD preparations which meet these requirements will no longer be restricted in terms of importation, possession, supply and administration, but “exportation should still be unlawful” unless a relevant licence is held.

The news comes as an entrepreneur has been given the go-ahead to grow low-THC cannabis in Guernsey for her range of organic CBD oils and other natural health remedies.

In the same report, the Chief Pharmacist also recommended the Minister's approval to reclassify a number of other substances, which he gave.

Gabapentin and pregabalin – drugs used to treat epilepsy – will now be scheduled as Class C controlled substances due to the seriousness of their misuse as having “been associated with avoidable deaths".

Pictured: Tina Bolding, the Guernseywoman who has secured a grower's licence for cannabis.

The Chief Pharmacist's report makes note of a move by the UK’s drugs advisory panel, the ACMD, which “identified a number of harms… when the drugs were used in combination with other depressants, that they could cause drowsiness, sedation, respiratory failure, and death".

The MDAC therefore decided to follow suit and categorise the substances as Class C.

The Minister also approved the rescheduling of a ‘designer drug’ – an illegal substance that has been chemically modified to get around exemptions in the law – that is being sold online as a Class B substance.

Based on a recommendation from MDAC, he also agreed that a requirement for prescribers to notify the island’s Medical Officer of Health if they consider that someone is addicted to certain drugs should be removed from Jersey legislation.

Posted by Scott Mills on Apr 18th, 2019
3 percent!!!! wow, that's like a weak beer! why then in most developed nations can you purchase varying strength CBD oil.It's completely not worth it. No benefits would come out of 3 percent. Just legalise it fully. Patients' which this oil would help, should be offered both THC and CDB, and not at the percentile offered. Waste of time. Just order of the internet and be done with it. Don't buy holland and barret, even weaker.
Posted by Mark Wilbourn on Nov 13th, 2021
Pure CBD oil is currently classed as food despite it’s medicinal effects, which vendors aren’t allowed to claim/report/admit. This is dangerous because CBD interacts with prescribed medication and antimuscarinic medication effects are recognised to cause problems, especially in the elderly. I thought Jersey already permitted a 3:100 THC:CBD ratio and if this is the case that’s already 3% THC relative to CBD. There are multiple reports that the lax food standards in the UK enable CBD oil to be sold that doesn’t contain what it says on the bottle, but Jersey Hemp seems to make CBD oil to much higher standards than other producers.
To place a comment please login Login »