Sailors buoyed up for big race 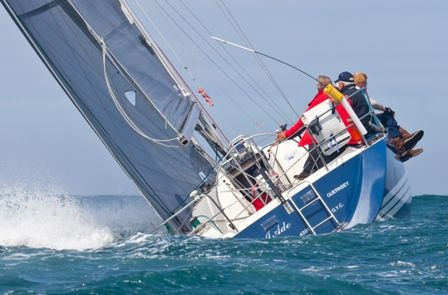 Sailors buoyed up for big race

Around 500 enthusiasts are preparing to set sail from Guernsey to Jersey this summer in the biggest Inter-Island yachting event of the year.

Aden Clark, Skipper of Guernsey yacht Blue Jade said: “The beauty of this race is that anyone can win it if they get their tactics right on the day, so I’m looking forward to another great race.”

This race alternates in direction every year and starts in Guernsey at 8 am on Saturday 7 June.

Commodore of the Guernsey Yacht Club Jason Hobbs said: “The Carey Olsen Inter-Island Yacht Race is the event that the sailing community look forward to all year. It’s the most important race in our calendar and we’re hoping the weather will play its part to make it a truly great day.”

Managing Partner of Carey Oslen in Jersey Alex Ohlsson said: “We are proud to sponsor this event for the fifth year running as it is such a pivotal event in the sailing calendar and brings together keen sailors of all ages. While there are many experienced sailors in the race it also ensures that people of all ages and abilities are included, making for a very enjoyable atmosphere and a fantastic event overall.”

All the competitors should arrive in Jersey before 4 pm and once the competition is over the skippers and crew will be off to a seventies themed party and presentation evening.

All funds raised during the presentation evening will be donated to Channel Islands Air Search and RNLI.

Entries need to be in by the end of this month and forms are available from the Guernsey Yacht Club or St Helier Yacht Club, by email at gyc@cwgsy.net or for download at www.careyolseninterislandyachtrace.com