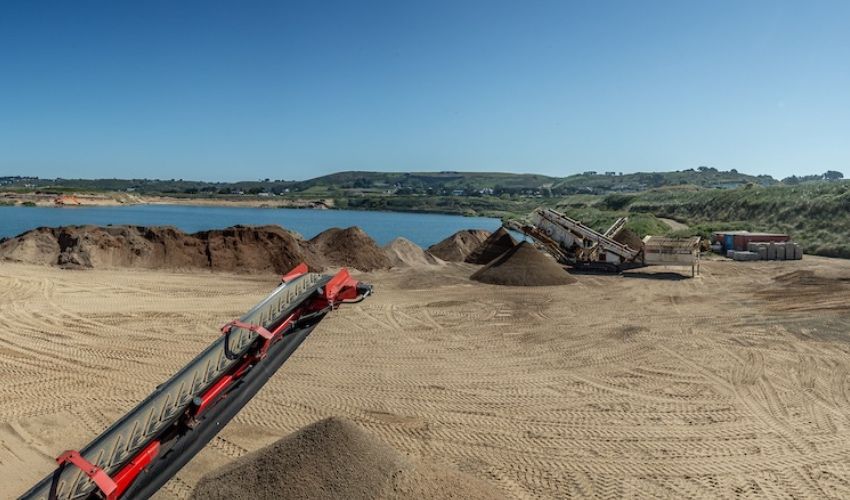 The construction industry has said that the suspension of sand quarrying in the island will quickly cause it significant problems, leading to project delays and extra costs.

Yesterday, the only provider of building sand in Jersey – which is dug from St. Ouen’s Bay – announced that it was suspending excavation from 1 September because it had removed all of the sand it was allowed to under its current Government-issued licence.

Owner Jason Simon said that, although the five-year permit ran until the end of 2023, high demand from the construction industry had exhausted reserves quicker than expected.

He added that requests to Government to extend the licence to allow him to extract fresh reserves had been “ignored” despite there being “no credible, reliable or consistent replacement ready.”

That appears to the case, with construction heads now saying that reserves of sand and concrete would be quickly exhausted without fresh supply.

Martin Holmes, who chairs the Jersey Construction Council, said: “I am in discussion with both Government and Simon Sand at present to see if we can progress matters. Before commenting further, it is important that I have a clear understanding of the issues, in what I am aware is a long running and complex matter.”

Pictured: The quarry in St. Ouen's Bay has produced a body of water as sand has been extracted (Credit: Google Maps).

However, Mr Holmes added: “Suspension of the primary source of an essential building material at such short notice will quickly cause significant programme and cost issues for the construction industry.”

The draft Island Plan, which has been shortened to a three-year period because of the pandemic, envisages the sand quarry closing by the end of 2023, with building sand then being created by washing inert waste, crushing rock down, and some being imported.

However, those alternative sources are not yet ready in sufficient quantities, leading the Island’s booming building industry to potentially be without one of its fundamental ingredients, at least in the short term.

Environment Minister Deputy John Young said that he understood that there were unextracted areas of sand within the Simon Sand’s current permit, so he was unsure why the suspension had been announced.

“We have declined an application to allow extraction into new areas of land, but we did decide to extend the time limit of the existing permit to the end of 2023,” he said. “I recognise that the unextracted areas within the current permit might be more difficult to access but it will take us through this interim period, until there are alternatives in place.”

Deputy Young added that the quarry giving a week’s notice before suspending excavation “was not a responsible thing to do”.

He said that other quarries already produced by-products that could be used as an alternative to sand, and that Ports of Jersey could already receive imported sand, but he conceded that this was not yet at a rate to match current demand.

This morning, the National Trust – which his campaigned for sand extraction to end in St. Ouen’s Bay – said it was “absolutely crucial” that Planning was not “unduly pressurised into granting additional consents when enforcement issues remain outstanding”.

Pictured: The National Trust wants the quarry to be returned to a natural habitat.

The organisation said that the operator of the quarry had not met previous planning obligations to begin restoring the area.

However, Simon Sand argue that the Government rejected its plans to retain the large body of water that quarrying has created and has not provided a credible solution to how the existing lake will be infilled.

An additional challenge is that the water is contaminated by a manmade chemical linked to cancer and liver disease called PFAS, which was an ingredient of firefighting foam sprayed at the Airport until the early 1990s.

The chemical is also stopping Jersey Water fully utilising boreholes in the bay that it relies on to provide drinking water.

Posted by Denise Shrives on Aug 25th, 2021
I hope planning do not give in to this black mail by Simon Sand, they need to move on away from sand and take up the challenge to produce other product a soe of the other quarys have. All power to the National Trust and E.M. John Young for keeping an eye on this situation.
Posted by Keith Marsh on Aug 25th, 2021
Such a stupid situation this Government has got us into.
They demand more building, cheaper housing, even "perhaps" a new hospital ~ THEN they make it more expensive and settle for an unproven source of "substitute sand".
For goodness sake ~ WAKE UP & TALK
Posted by Jon Jon on Aug 25th, 2021
Bloody government,talk to Simon’s and allow further extraction of sand .National trust take a hike! Will be a complete farce if we import sand into this island for building purposes let alone the costs.There are some complete idiots in this Island now!
Posted by Sarah Simon on Aug 26th, 2021
I have to chuckle to myself, not only to comments made by clearly an inadequate environmental minister but to those heading the National Trust. Perhaps the National Trust should try looking after what they have already!!
These so called eco warriors should note that sand is fast becoming a rare commodity, yet despite having sand on their doorstep, their intention is to import sand? (not sure that complies with either being a cost effective solution or negating an unnecessary carbon footprint, we'll import someone else's scarce commodity). Next step, we will make it! I have no problem with this if the recycled materials being used are non toxic and the facilities are in place to do so. After Env. Health have failed the island on more than one occasion, lets hope they don't fail again.
Just so islanders know, Simon Sand & Gravel, at its own expense, had an environmental impact assessment of the impact to wildlife, fauna and flora. It proved that there is an abundance of wildlife in the quarry. I put this down to its ownership, the owner takes great care with his land and the wildlife that resides their, why wouldn't he?
I walk around the quarry everyday, this year I got to see a vast array of critters that I do not find elsewhere in the bay. Glow worms in their thousands, hundreds of tiny baby frogs, flocks of sand martins and swallows, the black swans that visit annually, green lizards, grass snakes, the list is endless and I have photos and footage of all should anyone be that interested. The reason for such high quantities of wildlife in the quarry is because the land is private, people and dog free, the animals can live in peace. The National Trust want this land turned back to nature??? Doesn't make any sense at all to me, the quarry has a vast amount of nature, shame the government poisoned it with PFAS!!!
Posted by Davey West on Aug 26th, 2021
Maybe not in Jersey but still the same hypocritical organisation that sells when it suits them. The National Trust has been criticised in a huge outpouring of anger after it agreed to sell three acres of peaceful woodland in Devon to a housing developer.
Of course the sand should come from a local source and unless you are above in a plane you would hrdly know Simons was there. The alternative looks to be expensive untried untested and stupid. Buy local.
To place a comment please login Login »