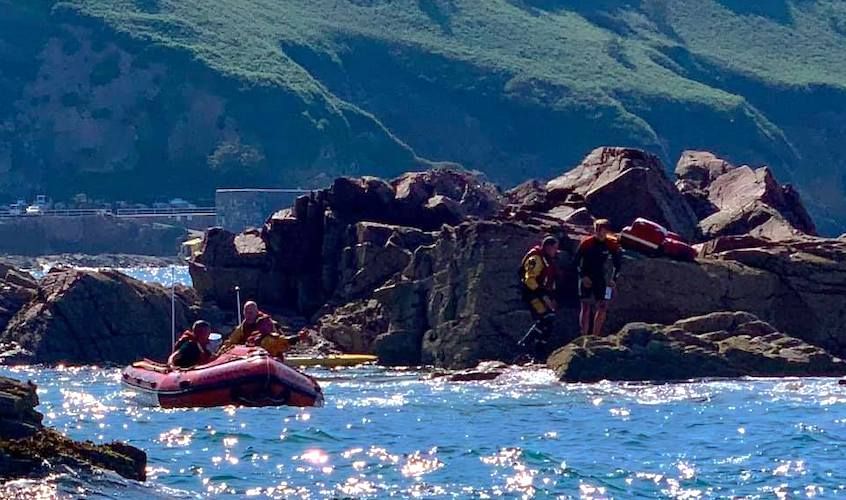 It was the former “serious incident” yesterday, where a boy with a broken leg, and his friends, couldn't get to safety, which prompted Absolute Adventures to speak out.

Instructors from the centre came across the group of young people whilst running a coasteering session yesterday (Tuesday 16 July) and realised that one of their number had “badly hurt his leg.”

Absolute Adventures spoke about the potential risks to the safety of the group in this set of circumstances, commenting: “Without a phone or radio to contact anybody, the group were unable to help their injured friend and with no wetsuits to stay warm they were in an increasingly vulnerable position as it got later in the day.”

Fortunately, however, the instructors managed to assist the group and contact the Coastguard.

Posting on their Facebook page, the RNLI wrote: “Just before 16:00 the St. Catherine’s Inshore Lifeboat was called out to a medical incident at Grève de Lecq where a 13-year [old] boy had suffered a suspected broken leg.

This is reportedly the “second serious incident” discovered by the centre this year. Last season, their Operations Manager Sean Kinsella was leading a kayak tour when he had to rescue an individual whom he’d found unconscious in the water after “a cliff jump gone wrong.”

Director and Owner of the centre Chester Mackley has urged islanders and visitors alike who are enjoying Jersey’s waters to take the necessary precautions, saying: “We are proud of our team for helping the group in need yesterday and as a company we do pride ourselves on always putting the safety of our customers and others enjoying the water first. Yesterday was one of many incidents we have seen over the years and we do want to urge people to make the most of island life but to be safe while doing so.

“Always have the proper equipment whether it’s a wetsuit, helmet, shoes or buoyancy aid, but also make sure you have a way of contacting emergency services whilst you’re out.  We want people to enjoy the water but take a phone or radio, wear a wetsuit and have knowledge about tides, currents and the coastline that you are exploring. And for those that don’t have the knowledge or equipment, that’s what we are here for; to make sure you can enjoy the water safely with our qualified and experienced instructors.”