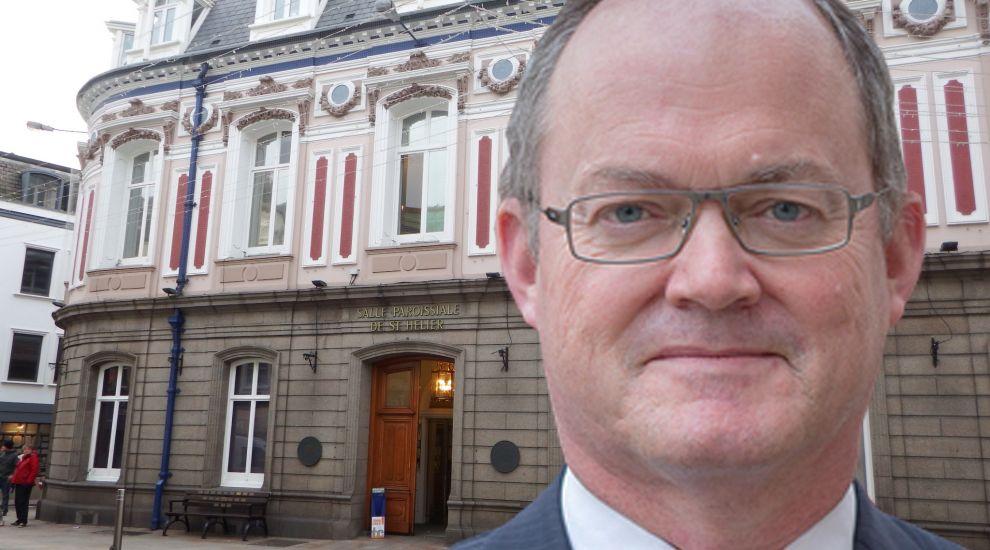 After more than 25 years in politics, more than 20 of them as the Constable of St Helier, Simon Crowcroft, who was re-elected early this morning, says he still has things he wants to achieve in and for the parish.

Crowcroft is now one of the island’s longest serving politicians.

He served two terms as a St. Helier Deputy in the late 1990s, and then on his second attempt, after unseating sitting constable Bob Le Brocq in a tightly fought competition back in 2001, became the ‘Father of the Parish’.

In 2008 he fought off a challenge from Alvin Aaron.

A bust for beating Baudains?

In November this year he will become the longest serving St Helier constable, beating Philippe Baudains, a turn of the 20th century politician who held the post for 21 years.

Baudains was so popular, when parishioners heard he was dying, they raised money to erect a statue in his honour, only for him to recover! That bust is now the central feature in Parade Gardens.

One wonders if Crowcroft will ever be regarded worthy of a similar recognition?

"St. Helier is constantly on the ropes"

Crowcroft has certainly fought St. Helier’s corner, which might account for his victory in yesterday’s General Election. He beat Mark Le Chevalier by 3,110 votes to 2,166, although there was an extremely low turnout, just 32%. 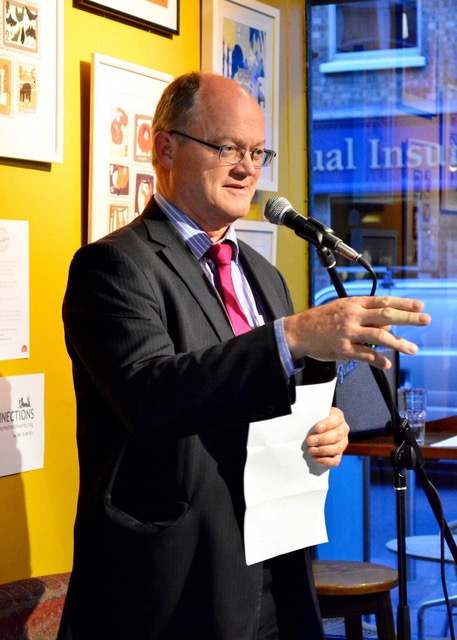 Pictured: Simon Crowcroft is just six months away from being the longest serving St Helier constable.

‘Fairness’ has been at the heart of Crowcroft’s long-running dispute with the States.

He says it took him almost 20 years to get the States to pay rent on their properties in St Helier, and that the States still do not pay for the services St. Helier provides.

According to Crowcroft, ‘St. Helier is constantly on the ropes’.

As evidence, he quotes the dispute over the ‘Bellozanne Covenant’, whereby he unsuccessfully fought to retain a deal under which parishioners were not charged for waste disposal because they had sold the land to the States on which the incinerator had been built.

‘Political fairness’ has also been one of Crowcroft’s clarion calls. The recent reforms leave him with mixed feelings.

St. Helier now has three more deputies than before and he feels the parish is "inching towards equality", but he believes the figure is still not high enough.

"With a third of the island’s population, St. Helier should have 16 Deputies. It currently has only 13," he notes.

It also only elects one constable which means voters are underrepresented compared with other parishes.

He sees two possible solutions. In one, the Constables form an upper house or chamber, similar to the House of Lords, or the US Senate.

The other would see Constables look after the parish, but not have an automatic right to sit in the States, and instead have to stand as Deputies in a General Election.

Both are radical suggestions. 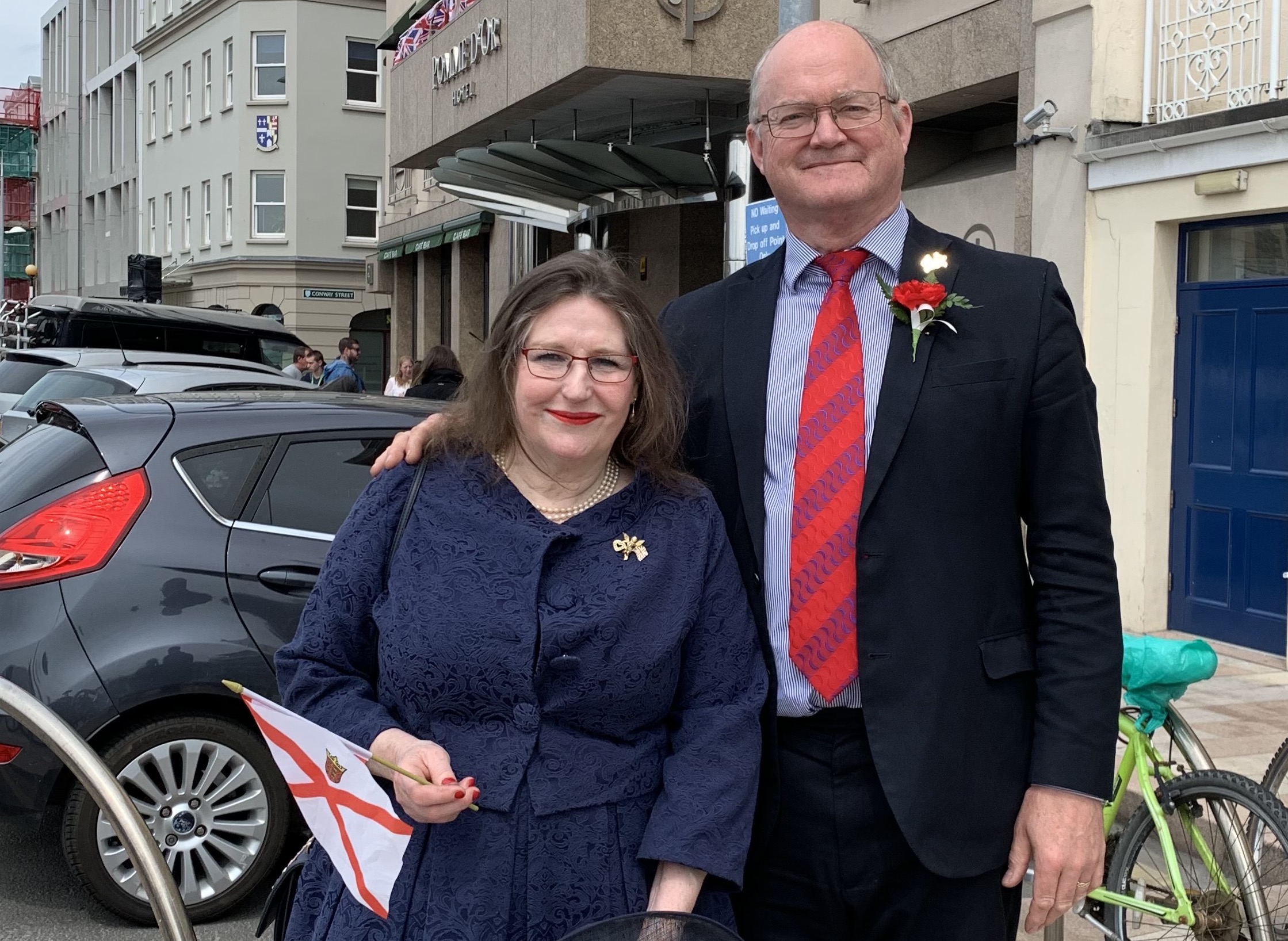 Pictured: Simon Crowcroft out and about in St Helier with wife, Angela Crowcroft.

"Interestingly," he says, "the dual role of the Bailiff didn’t come up as an issue in this election."

He is adamant as he has been for many years that the job should be split in two: the island’s top judge and speaker of the States.

"The second best job in the island"

With the role of Senator abolished, Crowcroft polled more votes than any other candidate in this election: usually a springboard to standing as Chief Minister.

But Crowcroft has ruled that job out: "I enjoy the role of Constable."

As he says: "A former Bailiff, Sir Philip Bailhache, once said to me, it was the second best job in the island after his!"

One of the aspects Crowcroft enjoys most about the job is it’s pastural role. "I think it appeals to me because when I was young I wanted to be a priest."

His one pollical regret over the past quarter of a century is a failure to make St. Helier more pedestrian and cycle friendly.

Having been elected for another term he may yet get his way.

Posted by Keith Marsh on Jun 23rd, 2022
Congratulations Simon, keep up the good work and make the States pay for all the St Helier services they use. Love the idea of a second chamber, its good radical thinking that has meant St Helier is going forward.
Posted by Jon Jon on Jun 25th, 2022
Shame he didn't have a stronger candidate to fight off, but does make me laugh when he wants more cycle and pedestrian friendly areas, he's helped kill off town already!
To place a comment please login Login »