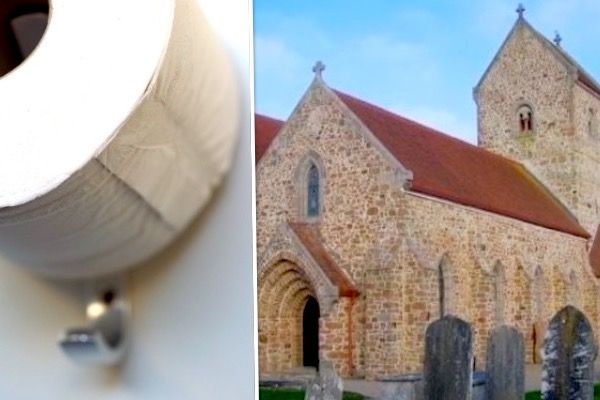 Parishioners in St. Lawrence braved the coldest night of the year to turn out in force and debate one of the most hotly contested local issues in living memory - whether to build a new church toilet.

Proving that local politics is far from dead, around 500 people packed the Parish Hall, and nearby school, to discuss the controversial issue, with a majority - 275 to 192 - voting to continue with the plans which had been halted after campaigners spoke out.

With such a strong show of interest, the night's meeting was delayed by around 40 minutes as the crowds of eligible voters - all St. Lawrence parishioners, according to the rules of the vote - queued outside to be registered. 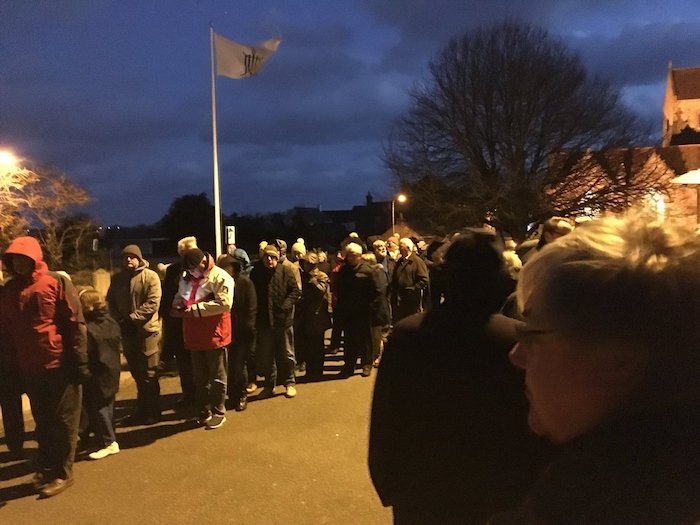 Pictured: 500 people braved the cold weather to come to the meeting.

The crucial yes/no ballot came following an speeches divided equally between the Rector, the architect and those speaking against the extension. But interested non-parishioners were not allowed to watch the proceedings via social media, after a show of hands voted down live streaming.

The Assembly then came to an abrupt halt after one elderly islander collapsed, requiring urgent medical attention. 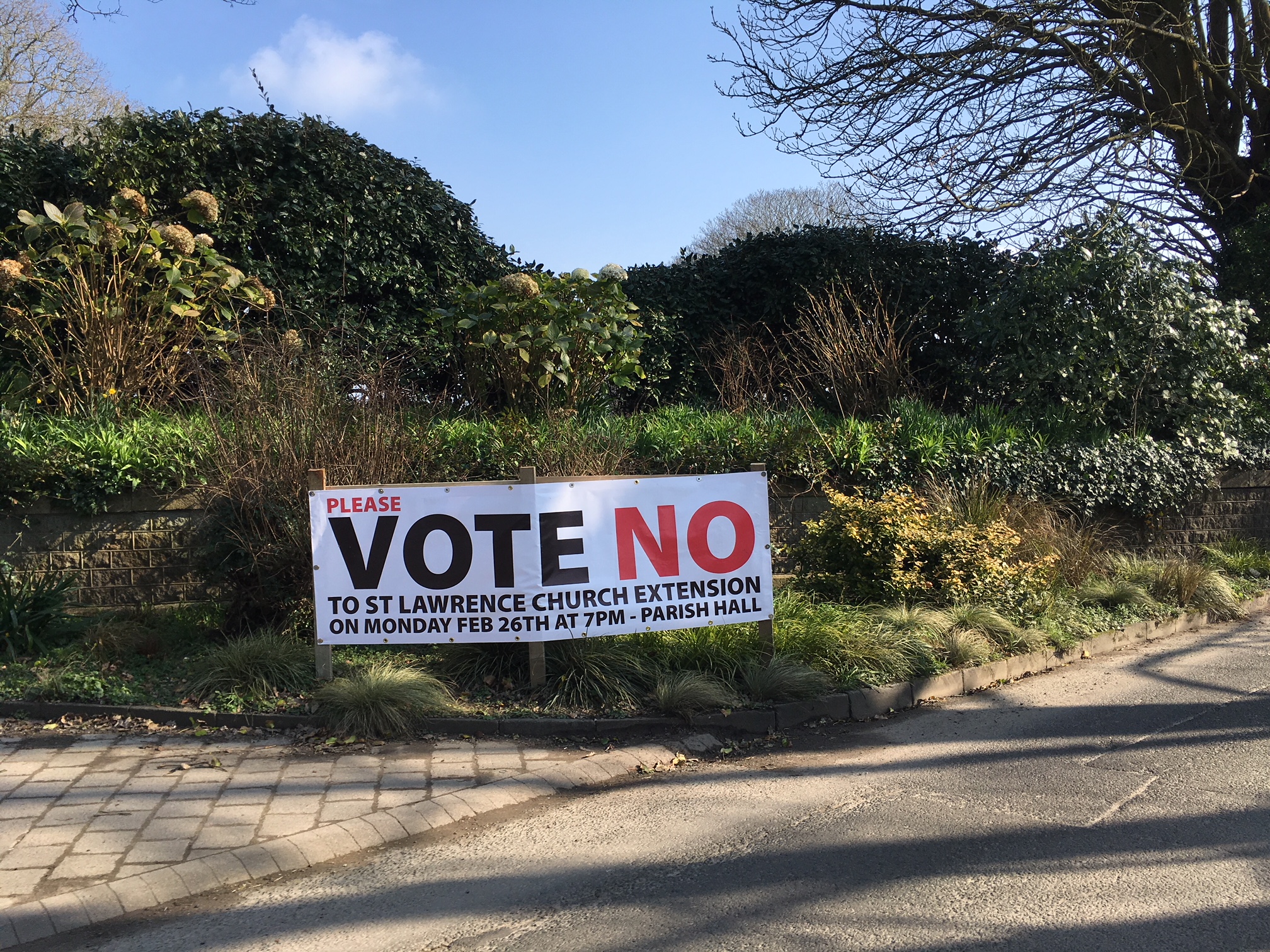 Pictured: one of the banners put up around the Parish.

Whether to provide a new toilet, with disabled facilities, on the side of the 800-year-old church has divided the local community, with campaigners invoking an old ecclesiastical law to halt the development.

In recent weeks it has turned into a deeply acrimonious battle, with echoes of an election contest, involving banners being erected around the parish lobbying for votes.

The original toilet proposal went to a parish assembly in July 2015 and was determined by a show of hands involving 34 people. The plans were initially rejected by the Planning Committee, but later approved on appeal.

In the run-up to last night's vote, a consultant Archeologist to Westminster Abbey even stepped into the debate. Professor Warwick Rodwell commented that the approved extension would cause “irreparable aesthetic, architectural and archaeological damage to one of the Island’s finest medieval buildings.” 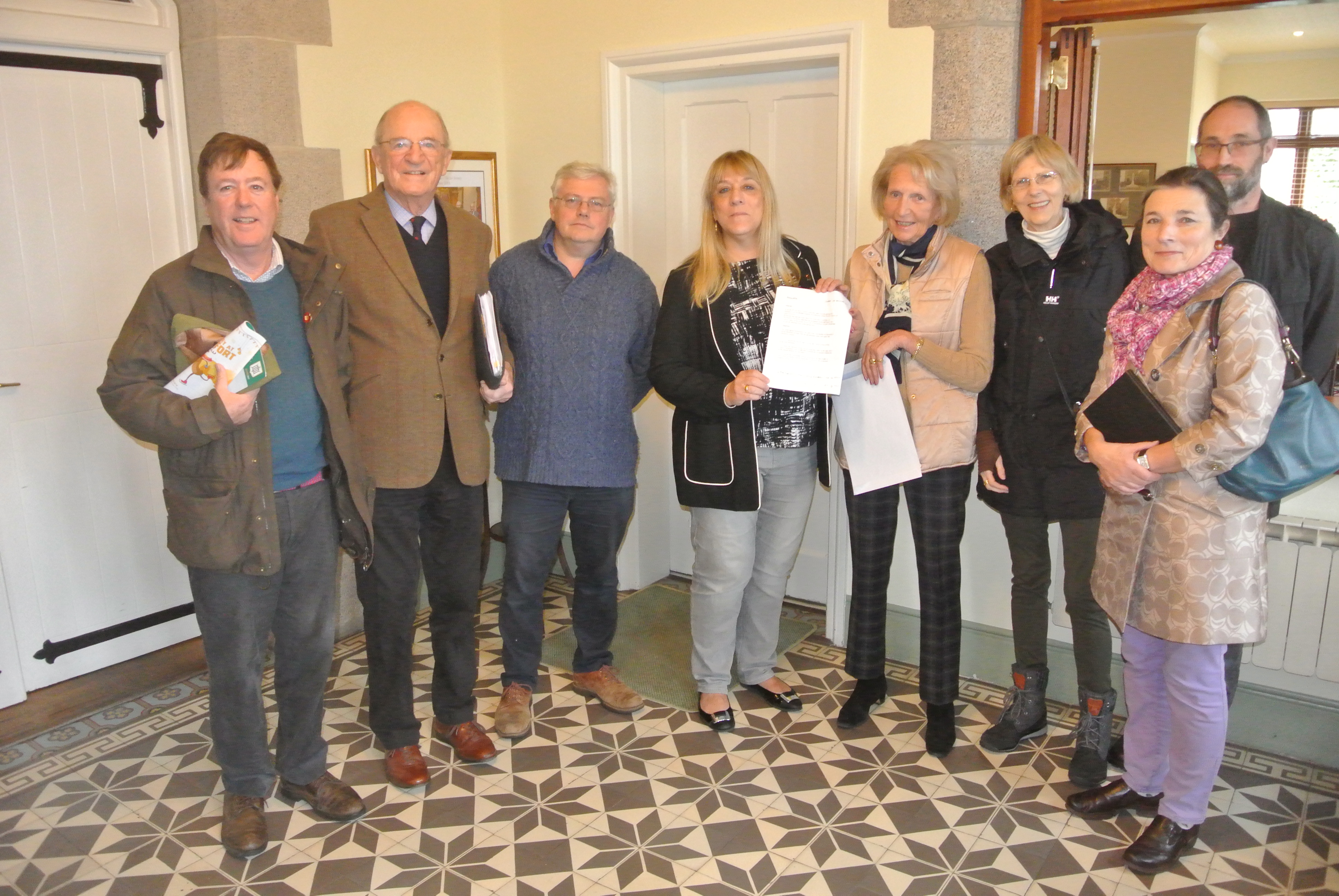 However, a majority of parishioners at last night's meeting disagreed, and work will now continue on the new facilities. 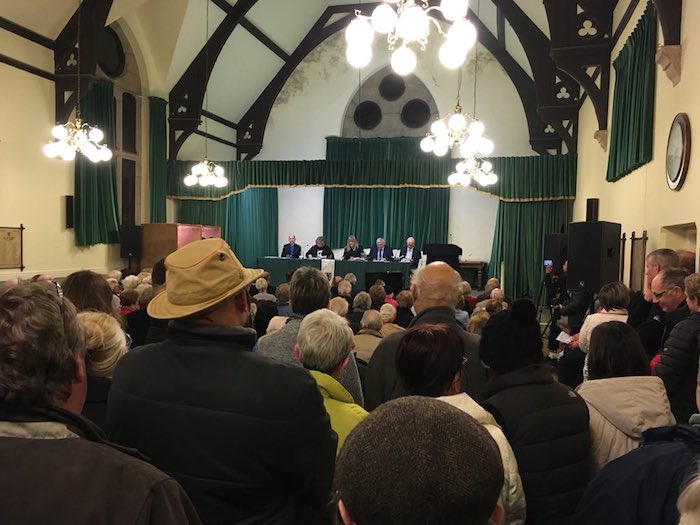 But it hasn't stopped some from expressing their anguish over the decision on social media. One islander blasted 'yes' voters as "gullible" and "ignorant" for voting for a development she deemed to be "sacrilege". Another added that he hoped to be able to "rip this monstrosity out" in future.

Construction of the toilet had been put on hold prior to the vote, but it will now be able to continue. The date of this is yet to be confirmed.

Posted by William Boyd on Feb 27th, 2018
These opposition people really do need to get out more.
The church has been added to and altered over the centuries and whilst I am by nature against modern buildings I have looked at the plans and they don't besmirch the look of the church. In fact it improves the look as against the blocked up door which is presently there. On another point, if it was purely a church matter then this would have been done already but as the twelve parish churches get ratepayers money it gave those who never darken the door of the church with their presence, a way in to object. Time for the twelve parish churches to pay for themselves and not get ratepayers money? My church doesn't.
Posted by John Henwood on Feb 27th, 2018
I have no particular view on this issue, but very pleased to note that democracy is alive and well in St Lawrence. The carping response of those who opposed the plans is sad, but not untypical of minority groups who don’t get what they want.
To place a comment please login Login »