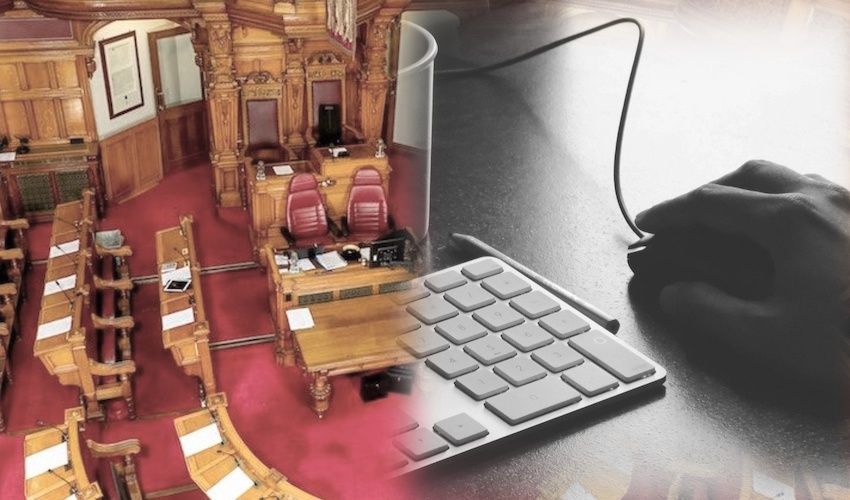 Normal service was resumed in Jersey's States Assembly this morning - but only for a little over an hour. The Island's politicians started off the new term with an 'old-style' face-to-face meeting - but quickly agreed to follow their own advice to local employers, and be a bit more flexible instead.

40 members supported the Environment Minister, Deputy John Young's, proposition to continue using Teams for States meetings, as has been the case since March 2020.

The States Assembly made history last year as the first parliament in the Commonwealth to hold a meeting and pass laws 'virtually.'

The States Assembly have voted to approve Deputy John Young's proposition (P.87/2021) to allow States Members to join today's meeting remotely, via Teams, if preferred. There will be a 45 minute suspension of proceedings until 11:30am. Teams links will be shared shortly. pic.twitter.com/XubvhX2Cid

Today was due to mark a return to normality with all members attending in person, but this was only short-lived following Deputy Young’s proposition.

Published just this morning, the proposal noted that the States Chamber does not comply with public health guidance as it doesn’t allow members to maintain physical distancing and its ventilation is inadequate.

The report accompanying his proposals also noted that many members are concerned that their health may be compromised by being required to attend the States in person.

“While some Members may feel relaxed about the potential risks to their health, others do not,” Deputy Young wrote.

The Environment Minister said the arrangement would also benefit members who have tested positive for covid but feel fine to carry out their work, as well as direct contacts awaiting the result of a PCR test.

Several members attended today’s meeting wearing masks while many supported the proposition citing the potential underlying health conditions their colleagues might have.

The Health Minister, Deputy Richard Renouf, and the Chief Minister, Senator John Le Fondré, both voiced support for the proposition, with the former noting that Government’s guidance to employers is to support flexible working.

As a result of Deputy Young’s proposition, members will be able to choose whether they want to attend the meeting in person or virtually, until a vote takes place on the rules governing hybrid meetings.

Deputy Young said he wished the current wording to be relaxed so that hybrid or remote sittings can continue until the pandemic is over, “without asking any Member to compromise their health."

Posted by David Whalley on Sep 14th, 2021
They need to get back to face to face work and set an example. Nobody wants to work anymore, just sit at home and pretend!
Posted by Harry Read on Sep 14th, 2021
If we accept that covid is with us for ever, as the scientists are suggesting, does this mean that either we have to build a new States assembly building providing facility for social distancing and full ventilation, or the Assembly will never meet again in full?
When our States members are allowing nightclubs to open where social distancing doesn't exist it seems a bit strange that some of them can't attend a meeting and some feel the need to wear masks is this mixed messages or what?
Posted by SimonBevens28 on Sep 14th, 2021
States members are required to attend sittings, so it is only right that those who wish to, attend from home. Its about personal choice for those who may have health concerns.
The one good thing that has come from this pandemic is the inclusivity that remote working offers, opening options for the less able.
Posted by Lesley Ricketts on Sep 14th, 2021
This is sheer hypocrisy from our Government. People are back at work now, sitting in bars, cafes and restaurants. Nightclubs, festivals and travel have all resumed. Get a grip you should be setting an example.
Posted by Keith Marsh on Sep 15th, 2021
I don't care where they work ~ I just WANT them to do so.
To place a comment please login Login »