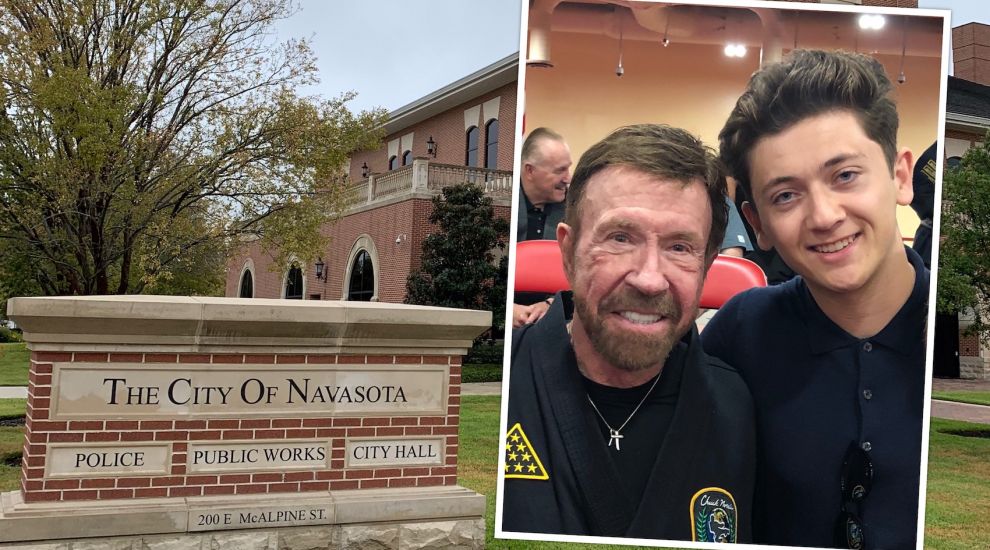 A small Texan town home to Chuck Norris is today celebrating a day named after a 19-year-old first aider and volunteer champion from Jersey.

The Texan city is home to actor Chuck Norris, who inspired Tom to volunteer from a young age.

The former Haute Vallée student joined St John Ambulance in 2009 at the tender age of eight. 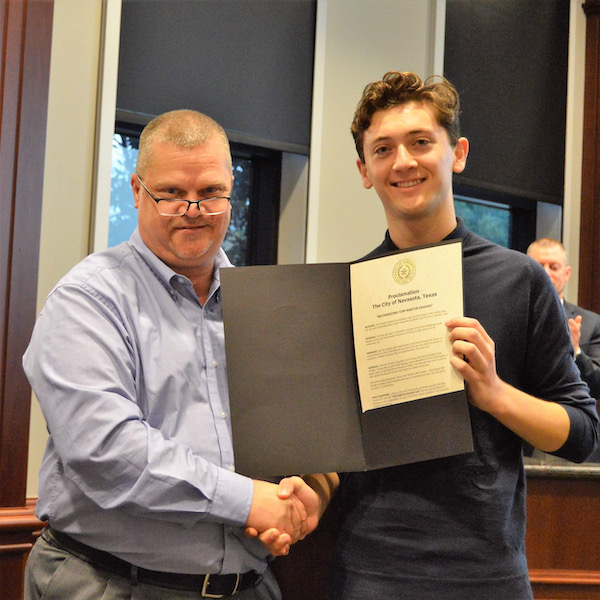 Pictured: Tom and Bert Miller, the Mayor of Navasota.

In just five years, he dedicated 500 hours to the charity, leading his Head of Year, Emma Mc Cartan and his Science Teacher, Rachel Barr, to nominate him for the Diana Award, which he eventually won.

Since then, Tom has joined the organisation as a Youth Ambassador and received further recognition with a Sovereign's Award - the premier achievement for young people within the Order of St John worldwide and the only award to bear the signature of the Sovereign Head of the Order - as well as a Points of Light Award – a special honour to recognise “outstanding” volunteers that help to make a change in their community from the former UK Prime Minister, Theresa May.

A few years ago, Tom wrote to his childhood hero and to his surprise, he received a response.

Since then, Tom has been in touch regularly with the Norris family, and, last year, he got to spent time with them in Nevada.

Later on, Mayor Miller invited him to Navasota to share his story of volunteering and charity work and inspire citizens, especially students to engage in community service. He didn’t expect that on the first day of his visit, Mayor Miller would name a day after him, calling upon his citizens “to show appreciation for all of Tom Martin Hughes' dedication and hard work towards volunteering and encourage you to follow in his footsteps and make a difference in our community." 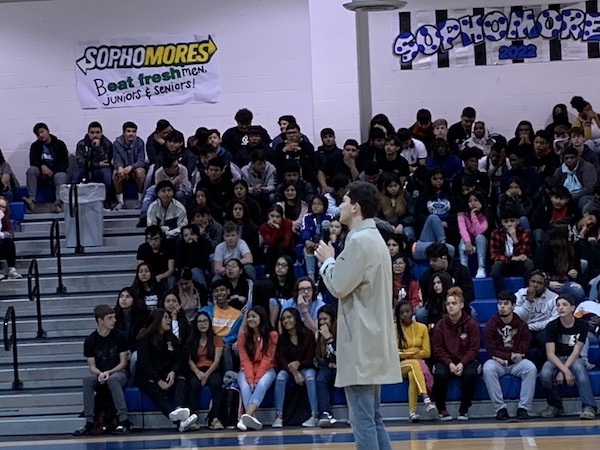 “While on the visit I attended City Hall for a Council Meeting and halfway through the room stood up and Mayor Miller annouced 28 October as Tom Martin Hughes Day,” Tom recalled.

This year, Tom was invited to return to Navasota, but due to the pandemic he was unable to travel from Italy, where he lives and works for Gucci.

But the young volunteer will still be marking the day and will be speaking to students in Texas virtually.

“The message of the day is about promoting the importance of volunteering and active-citizenship,” he added. “Therefore, using the power of social media I will be launching a challenge asking people to think about volunteering and making a difference in their local community.” 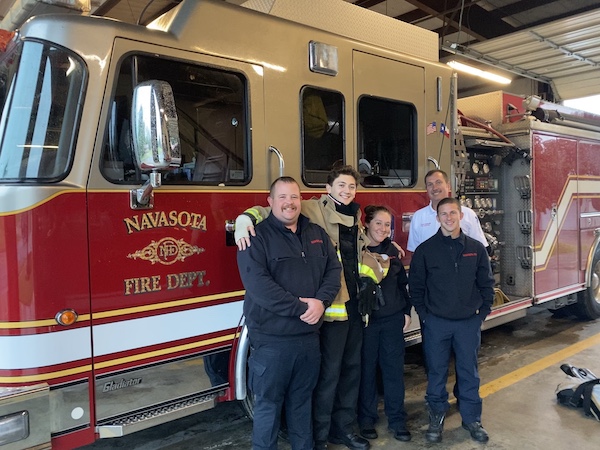 Pictured: Tom visited the Fire Department whilst in Navasota.

Tom said a “few famous friends” - including one “you can’t turn down a challenge from" - will be joining the challenge and he is encouraging people to visit his social media to find out who the guests will be.

He hopes that young people in Jersey will also join in. “The message I want to give to not only young people but everyone in Jersey is that it is so important to support each other especially in today’s climate,” he said.

“Community spirit is crucial in getting through the pandemic and that’s something we saw with the ‘Clap for Careers’. However, we need to continue this so I encourage you to think about how you can make a difference no matter how big or small – you never know the impact you will have.

“I think this year, and currently now more than ever we need to come together as a community and support each other. So, I think it’s vital people think about volunteering or how they can do their bit to benefit the lives of others.” 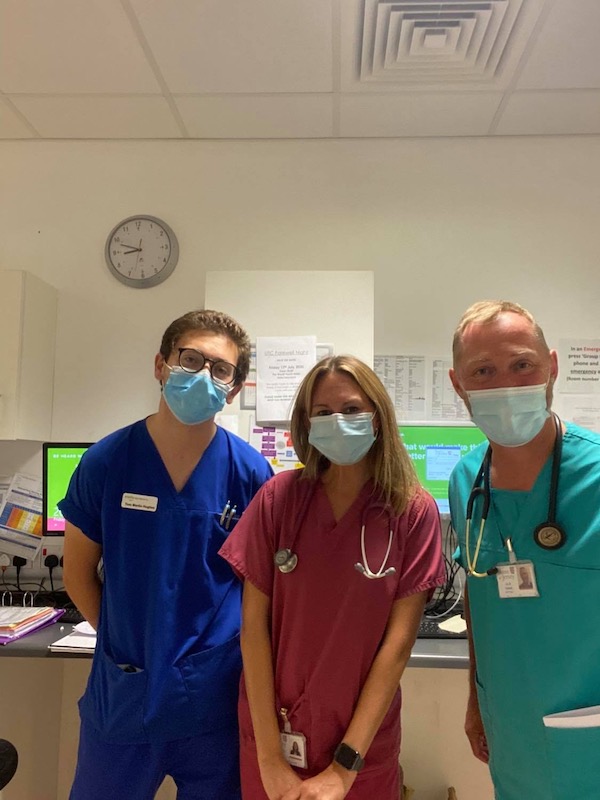 Tom himself showed his community spirit earlier this year. While on annual leave from Gucci, he returned to the island and joined the Urgent Treatment Centre, established at Jersey Hospital to ease pressure on the Emergency Department throughout the corona virus crisis.

Tom spent nearly four months working there and describes the experience as a “true privilege”.

“The Urgent Treatment Centre was made up of truly amazing people who were all redeployed to this new pop-up department and did above and beyond to make it work,” he said. “I have never worked with such compassionate, empathetic and dedicated colleagues as I did in the UTC and I will truly remember that experience for the rest of my life." 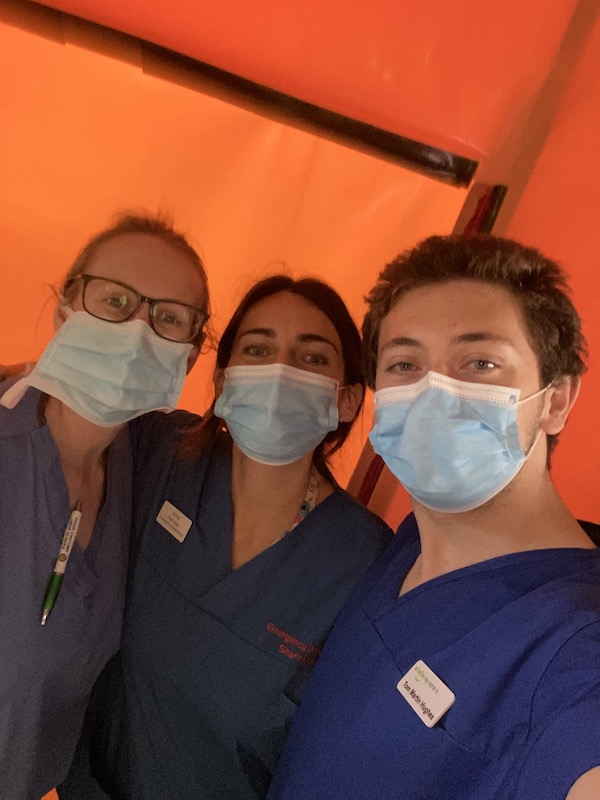 Pictured: "None are more deserving of recognition than the UTC Team," Tom said.

“I also know they are nominated for a OneGov award and I have to say that I work with so many amazing people in Health & Community Services; however, none are more deserving of recognition than the UTC Team, they were the busiest department in the hospital and people were redeployed to make it work and the GPs played a crucial part in supporting Nursing Staff as well as Hospital Doctors.”

Posted by Scott Mills on Oct 28th, 2020
Chuck Norris can sleep for 26 hours a day. When he does push ups...he pushes the World down. Also known for inventing the giraffe, by punching a horse in the mouth. When he gets heartburn, he drinks nepalm to soothe it. Also heard he can do a wheelie on a unicycle. Once a rattlesnake bit him in his hometown, sadly the snake died 3 days later.
To place a comment please login Login »