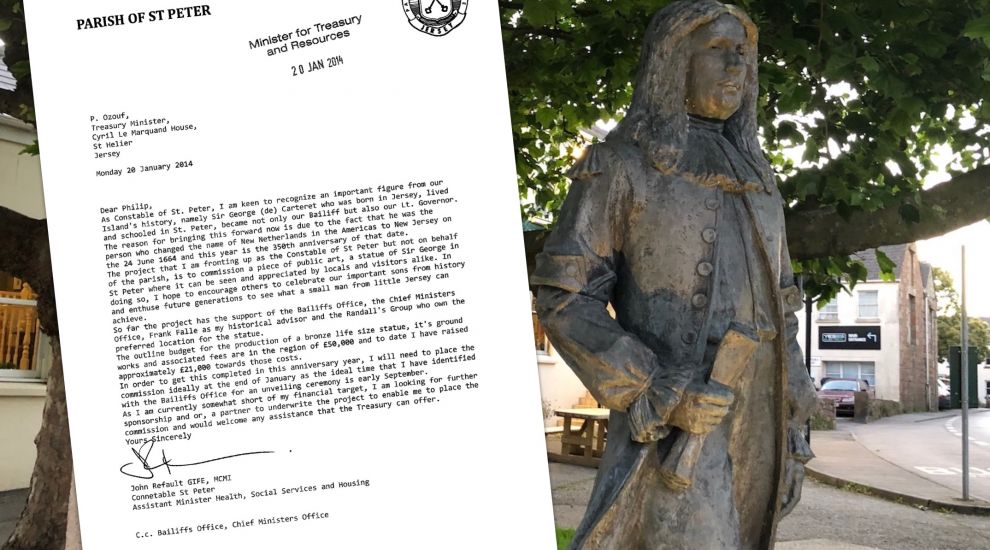 The island’s Treasury was called in to help pay the bill for the Sir George Carteret statue after a “shortfall” in donations led to a £15k funding gap, correspondence unearthed by Express has revealed.

The bronze figure was erected in St. Peter in 2014 to commemorate the 350th anniversary of the founding of New Jersey.

While it was supposed to have been predominantly funded by private donations, it recently emerged that more than £36,000 in public funds had been contributed towards the statue, with no specific due diligence undertaken.

The current Treasury Minister said the contribution was to show the government’s support for the 350th anniversary celebration.

Meanwhile the driving force behind the statue, former St. Peter Constable and Assistant Minister John Refault, previously told Express the contributions were appropriate because the then Chief Minister Senator Ian Gorst and Treasury Minister Senator Philip Ozouf “were very keen on building business and cultural links with New Jersey, and this fitted in perfectly with that.”

Video: The unveiling of the statue.

However, it’s now emerged that the Treasury only got involved to plug a £15,000 gap when donations to the project fell short while the progress on the statue and linked anniversary celebrations were already underway.

A letter released following a request under the Freedom of Information (FOI) Law by Express shows how Constable Refault first wrote to the Treasury Minister in January 2014 to ask for help.

Detailing the project’s estimated £50,000 cost, he added that a commission would have to be placed by the end of the month in order for it to be ready on time for a September unveiling.

However, the Constable noted he was “currently short of my financial target”, stating: “I am looking for further sponsorship and or, a partner to underwrite the project to enable me to place the commission and would welcome any assistance that the Treasury can offer.” 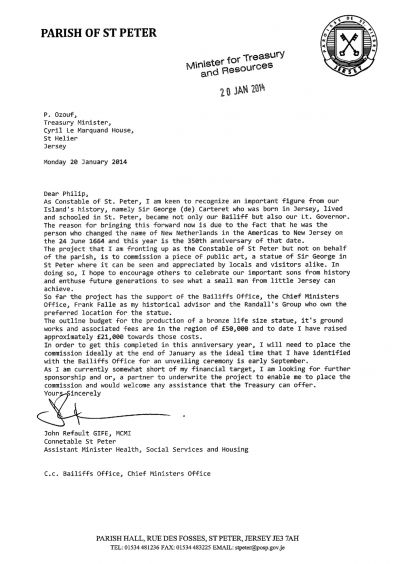 Pictured: The letter written by Constable John Refault to the Treasury Minister. (CLICK to enlarge)

In April, the Constable wrote directly to the then-Treasurer, Laura Rowley, warning that a number of donations had not come through.

He wrote: “The statue project is progressing quicker than I had expected and given the pledges so far received and others not fulfilled, I will be anticipating a shortfall in the region of £10 to £15 thousand pounds. I still await a couple of pledges who assure me that funds could still be made available but cannot rely on those as I am being pressed for monies for the statue and funding for associated works.

“May I request your assistance with funding so as I can commission the granite plaque featuring his brief history and other small works. If so, I have opened a budget line in the Parish accounts into which all monies are paid and costs drawn to assure that all transactions are appropriately recorded and cheques made out to the ‘Parish of St Peter’ can be paid into. If needed, I can provide an invoice from the Parish to support any monies received.” 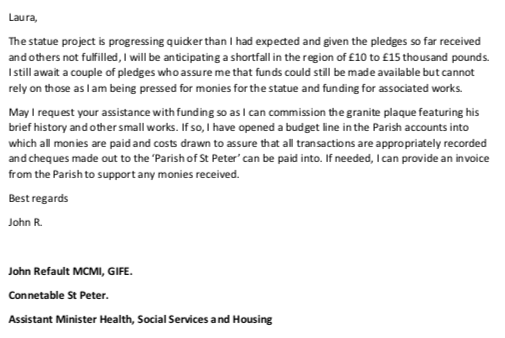 Pictured: An email sent by Constable Refault in April to Treasurer Laura Rowley.

To this, Ms Rowley replied that £15,000 would be released. In return, Constable Refault thanked her, adding: “Should there be a surplus at the end of the project, I will do course advise you and make those surplus funds repayable to Treasury.”

The news comes as debate continues over the appropriateness of the statue and whether it should be removed, given that Sir George was a trader of enslaved people. It was covered in white paint by protestors following Jersey's Black Lives Matter protest.

According to public art specialist Chris Clifford, there are many lessons to be learned from the saga around the commissioning of community art features.

“This embarrassment could have been easily avoided if the project had been properly planned. The successful projects that I have been involved with, such as the St. Helier First World War memorial, have had a community focus and a proper artist and design selection process from the outset,” he previously told Express. 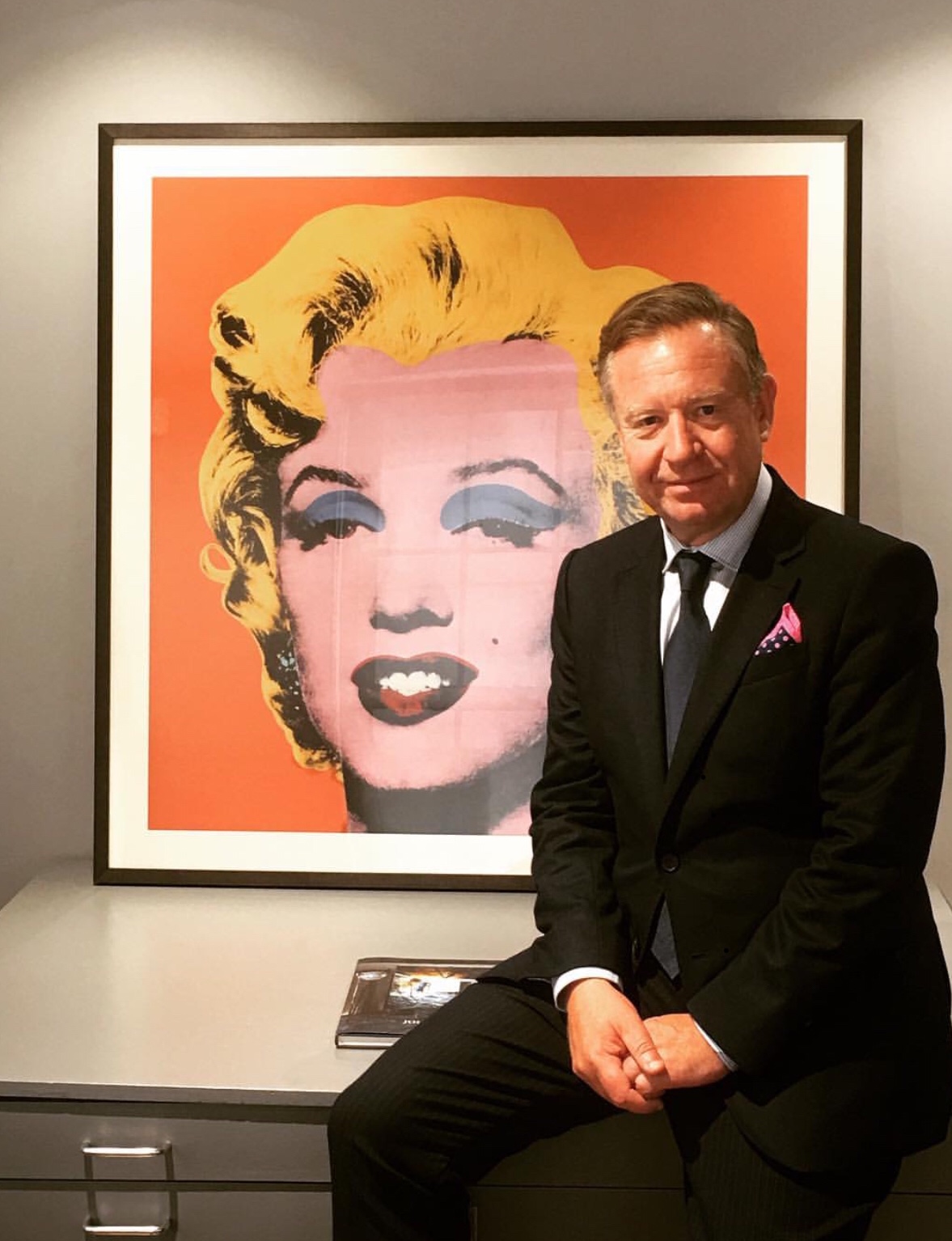 “By thinking about location, materials, design, educational value, who can get involved and what is the lasting impact, you avoid the problems of having a statue of someone responsible for the deaths of 44,000 African slaves sculpted in a 19th century style which is inappropriate, out of date, and in the wrong location. I hope future projects, especially ones funded by the public, are done differently.”

Posted by Steve Liron on Aug 12th, 2020
Nice of Mr. Clifford to pitch so eloquently for any future politically correct commissions. The final paragraph of this piece is typed between quotation marks which rather infers Mr. Clifford has been quoted as saying that good old Sir George De Carteret killed 44,000 African slaves. Doesn’t sound like good business sense, most likely an inaccurate statement and sticking with the politically correct mantra, probably highly offensive to any of his descendants alive today.

Can we not stop all this posturing around revisionist history. Sir George De Carteret was I believe involved in the slave trade which many of the time were. He also helped put this island of Jersey on the map by re-naming a piece of what is now fine real estate in USA after his beloved home off the coast of France. Not all bad then…

The fact is many people reading this today will be descended from sad souls who suffered the ignominy of being enslaved. Think of the Romans and the Barbary slave trade which saw white Europeans sold in North African slave markets over a period of some three hundred years. It still existed in small part through emancipation of African Slaves in the US but is rarely if ever mentioned as doesn’t quite fit today’s narrative. So it’s ok just to revise part of our potted human history then….
Posted by Peter Colback on Dec 20th, 2020
There is so much more here as maybe the de Carteret family would like to post a reply?

“In his recent book about the Royal African Company, historian William Pettigrew states that it: “shipped more enslaved African women, men and children to the Americas than any other single institution during the entire period of the transatlantic slave trade.” This brutal and sustained trade exploited thousands of people. Investors were fully aware of its activities and intended to profit from this exploitation.”

History is narrative on many levels as we all can understand that the writing of history is often made at the time as propaganda. It has taken years for my family to talk about the awful abuse of many directly after the occupation where islanders tarred others heads so they had to cut off their hair to self shame publicly. I am saying here that history needs to be rewritten as the truth is rarely written in the first place.... we have all benefitted from the slave trade of centuries past but I do not want to commentate it in such an offensive way. The artist also asks for the statue to be taken down or left with the new art of the red paint on it as that is contemporary

Discussion around that issues that are complex is so important. My school education unfortunately excluded all of this local history!
To place a comment please login Login »