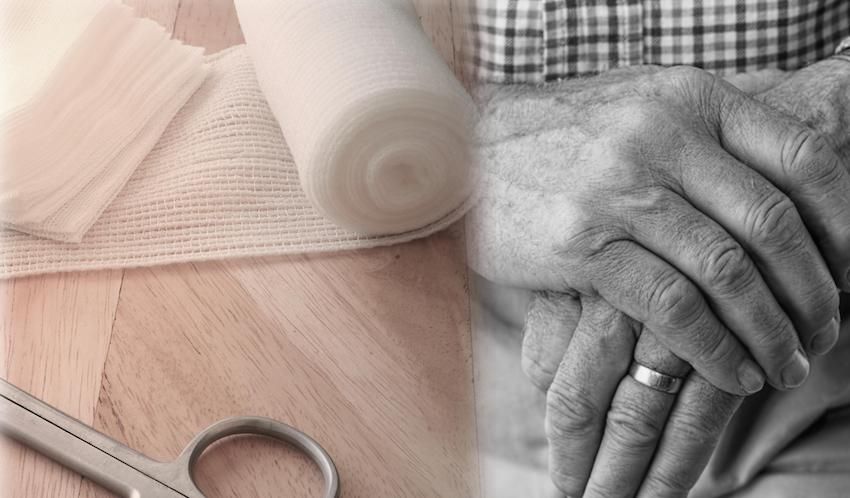 An inquest into the death of an elderly man, who faced a weekly bill of at least £160 to dress his leg ulcers and sometimes resorted to using nappies on his wounds, has exposed the price problems for islanders struggling with chronic sores.

Speaking at the hearing into the death of an 86-year-old former care home resident this week, Relief Coroner Dr Martin Barrett – who was presiding over the hearing – was told that, whilst he was alive, the man was “worried about the cost of dressings.”

This, it emerged, is a problem facing many islanders, as Jersey does not prescribe dressings or bandages for patients suffering with health conditions that require them – meaning they have to shoulder the cost themselves, sometimes resorting to inappropriate alternatives.

Answering questions from the Relief Coroner, Family and Nursing Home Care (FNHC) tissue viability nurse Gilly Glendewar estimated that, to dress both of his legs appropriately for his condition, the widower would have likely had to pay “£160 a week in dressing changes… as the cheapest option.”

She emphasised this was just “a ballpark figure.”

Describing it as “a big issue”, the nurse explained that an ulcer patient could need to change the dressing every day or every other day for “24 weeks-plus”, depending on the complexity of the wound(s).

When Dr Barrett asked if this means that “the cost of dressings can run into thousands of pounds for one individual”, Ms Glendewar confirmed that this was indeed the case.

The finding comes as FNHC and the Health Minister are looking to improve access to treatments for those suffering from ulcers and other wounds which often require expensive dressings.

The elderly gentleman ultimately passed away at the Hospital in June of last year after being a resident at a local care home for several years.

Pictured: It was heard that the cost of dressing an ulcer can quickly add up.

The inquest found that the cause of death was septicaemia - blood poisoning - as a result of his sores becoming infected.

The inquest heard that the gentleman – described by his doctor as “fiercely independent” – often found it difficult to accept the help of the staff at the residential home and was anxious to maintain this independence despite his declining health.

In a statement written by a long-term friend, the man was said to not “want the staff to help him [because] he just didn’t want the fuss.”

Although a safeguarding alert was raised regarding the gentleman by a nurse at the Hospital when he was admitted in May last year, the Adult Safeguarding Team found that there was no need for an investigation as his condition was “a clinical matter rather than a neglect matter".

Pictured: The inquest heard that the man often found it difficult to accept the help of the care home staff and doctors.

This decision was echoed wholeheartedly by the inquest’s findings.

Summing up all the evidence, the Relief Coroner found that, although the elderly man was receiving the best possible care both at his nursing home and at the Hospital, his resistance to treatment and assistance from professionals played a part in his death.

It was therefore ruled that “self-neglect was a contributory factor” to the man’s death which was ultimately caused by his septic leg ulcers.

Dr Barrett concluded proceedings by asking the Police Coroner’s Officer to pass on his condolences to the man’s friends and family.

Posted by Elizabeth Chellingworth on Aug 15th, 2019
That poor man, not only in terrible pain but had to worry about costs.
Posted by john garner on Aug 15th, 2019
Terrible situation for people to be in .....it is penalising certain illnesses ..Imagine being in hospital and getting the drugs and treatment free then being billed for a dressing .
To place a comment please login Login »