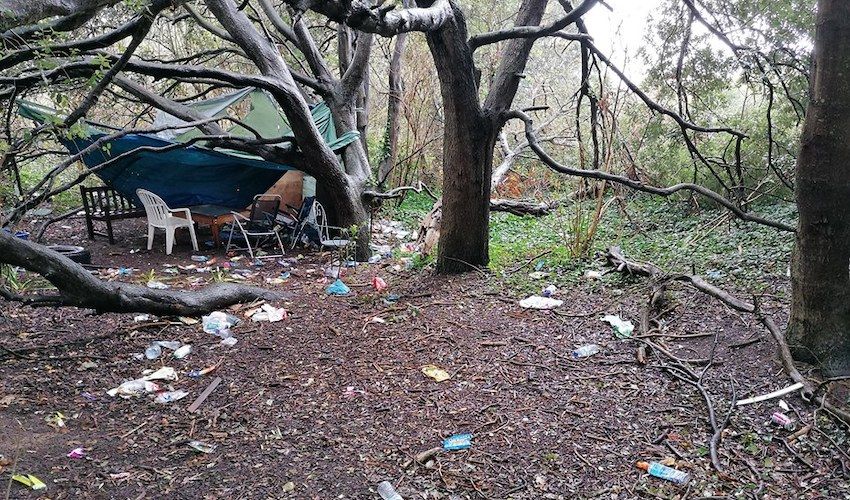 Police are investigating after a make-shift 'drug den' was discovered at the top of the sand dunes, with a group of young people seen making a hasty getaway from the site.

The den was uncovered when someone reported litter strewn across the protected site intermingled with what the Police are describing as “drug paraphernalia".

There was also fire damage to the natural habitat at Les Blanches Banques which is protected as a Site of Special Interest (SSI).

The Police posted on social media about the den, urging those with more information about this behaviour to contact the authorities.

Video: A dog walker's video tour of the site in question. (Maria Galloway)

One dog walker who came across the sand dune hideaway took a video of the damage caused to the area.

Speaking to Express, a representative for the Force explained that the den was reported to them last Saturday (26 October) and “the drug paraphernalia was papers, plastic bottles used as bongs and there was a strong smell of cannabis when officers arrived".

It comes as part of a spate of anti-social behaviour across the Les Quennevais and St. Brelade area and the Police believe that the same people are responsible for the recent incidents.

Recently, a school and nursery in St. Brelade has been targeted by vandals who left the children’s play area trashed with litter, tobacco, broken glass and even a knife.

The nearby pre-school Communicare also reports that they have had weekly break-ins since the beginning of term.

In response to the post, several islanders came forward with reports of other similar ‘dens’ popping up around Jersey. One claimed they’d seen one beside La Providence in St. Lawrence towards the marsh and another reported sighting of one in the Westmount woods.

Posted by Scott Mills on Nov 1st, 2019
Chairs in a den!!! Jeez Gen Z really go all out when making these. Their bottoms are too soft to sit on the ground. Bless
To place a comment please login Login »