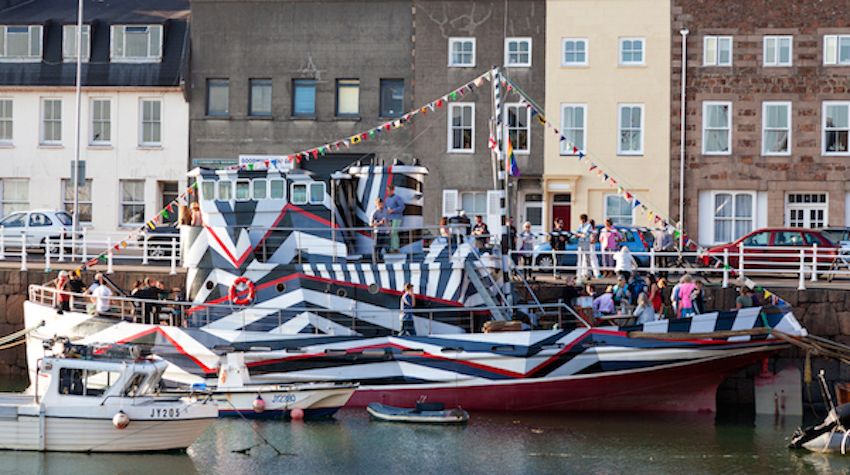 An iconic fixture in St. Helier’s historic harbour is going under the virtual hammer.

Elektra is a 1950s ex-US Army steel tug boat that was transformed into a WW1 Dazzle Ship by local artist Ian Rolls in 2015 to mark the centenary of the Great War.

In the years that followed, its owners, Lee and Kayli Rainbow, continued refurbishing the vessel internally and hoped that it might one day be transformed into an educational hub and tourist let.

They even launched a petition asking Ports of Jersey to find the boat a permanent mooring, as it had only been permitted to stay in place until its refurbishment was complete.

Despite their ambition – and around £100,000 in investment – the project sadly did not come to fruition, and Elektra is now up for sale on eBay.

In the listing, the pair said they’re having to put a stop to the project “due to health reasons and no longer having the time.”

There is no reserve price currently on the boat, which means bidders may be able to bag what the owners describe as a “bargain”. As of last night, there had been 36 bids by 12 individuals, taking the current price to £6,500.

There is one catch, however – Elektra can’t be moved under her own power.

The original engine was craned out back in 2016.

Since then, a refurbished Dorman V8 Diesel Engine and gearbox have been partly installed, but will need completing before the tug can head off.

“Please remember if you want to move the boat from Jersey to UK, you will need to arrange for her to be towed by another vessel,” the listing warns.

It will need a new mooring eight to 12 weeks after it is bought.

Having noticed the listing shared on Facebook, some islanders shared their sadness about its likely departure.

“It’s become a pleasing fixture of the English Harbour. Would be a pity to see it move elsewhere,” one commenter wrote.

There is just one day left to bag a ship, with the eBay auction closing at 11:14 tomorrow (Friday 30 July).

Ian Rolls: My favourite piece of artwork this year...