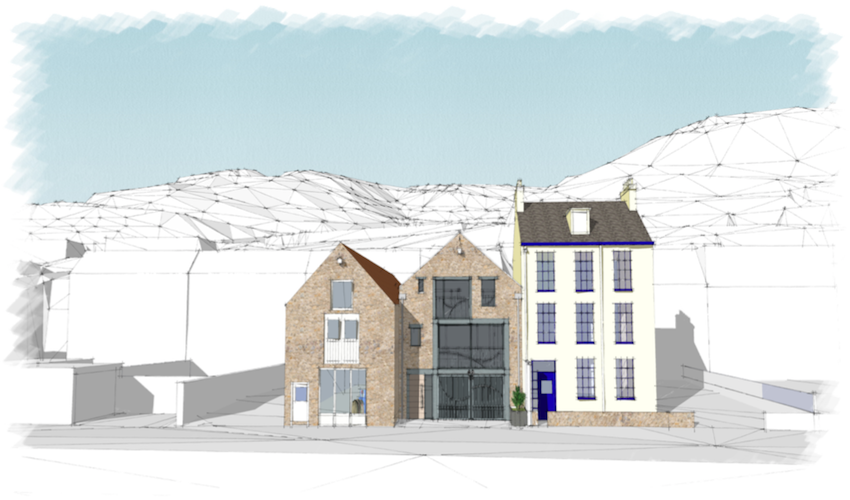 A St. Aubin property that burnt down in a suspected arson attack could be turned into a four-bedroom house after previous plans to transform it into a restaurant failed to garner interest.

Years after the 2015 incident, the Assembly Rooms complex is the subject of a new planning application proposing to demolish the burnt-out building and replace it with a new home overlooking the marina.

The Planning Department had previously given permission for a restaurant to be developed in the space on the Bulwarks. Attempts to find a tenant were ultimately unsuccessful, however, leading to this latest application for a new scheme.

The building was left severely damaged in December 2015 by a blaze allegedly sparked by an elderly tenant – Bob Gallichan – who was charged with arson, but always maintained his innocence.

Pictured: The 2015 blaze left the building all but completely destroyed (Sean Henstridge)

Mr Gallichan later committed suicide a matter of weeks after the fire which prompted the Police to close the case and no one else was ever charged with the offence.

Three other businesses within the complex who suffered as a result of the fire then clubbed together to sue Mr Gallichan's estate for compensation.

Planning permission to demolish the building and construct a restaurant on the ground floor below a pair of two-bedroom flats for tourists was granted on 9 August 2017.

But according to Waddington Architects’ design statement, the site has since remained “undeveloped due to lack of interest from the market to occupy the restaurant facility.”

Video: A new feature on the Planning website allows users to interact with a 3D model of the proposed developments. (Planning Register/Waddington Architects)

Harbour Front Ltd., who own the Assembly Rooms complex, have now submitted plans to develop the fire-damaged building into a four-bedroom house facing onto the marina in St. Aubin.

They are again teaming up with Waddington Architects who have created the designs for the project to gain Planning permission for the revised, solely residential proposals for the complex.

Pre-empting issues that may be raised at the Planning meeting, the architects’ design statement acknowledges that, “although the building is not listed, we are consciously aware that it is flanked by two listed buildings."

"Therefore we have proposed that the reconstructed building retains the existing form, massing and height to ensure there is no adverse impact on the flanking listed buildings,” the statement explains.

Pictured: The plans propose replacing the unit with a four-bedroom house facing the marina. (Waddington Architects)

With regards to policy to reduce dependence on cars, the architects say that the house’s “rear store has provision to accommodate electric bicycles” and notes that the area is well connected to regular bus and cycle routes.

The full application and 3D model is available on the Planning Register and is currently subject to public consultation and will be considered by the Planning Department.