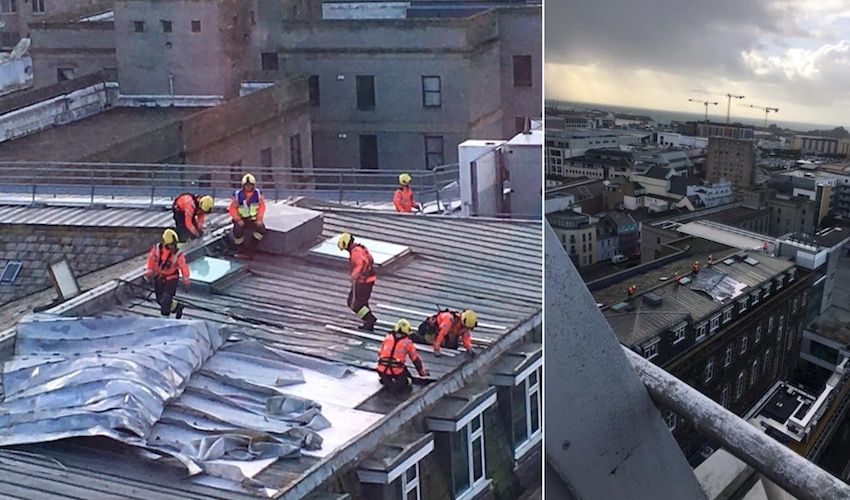 A section of the hospital’s roof torn by the storm has now been “secured and made safe”, the emergency services have announced as the surrounding roads reopen to motorists and pedestrians.

Strong winds overnight were to blame for parts of the hospital’s roof loosening, but now firefighters have managed to secure it and reopen the area to the public.

Gloucester Street and Newgate Street were cordoned off earlier today with people in the area being urged to stay inside by Police Officers at the scene.

Video: Those leaving nearby buildings were told to stay inside.

Announcing that the area had been made safe once again, Watch Commander Ryan said that he “would like to thank all other emergency services and hospital staff for their assistance and advice as well as the general public for their patience during this incident for any inconvenience that may have been caused by the closure of Gloucester St and surrounding areas.”

A Health spokesperson said the department "would like to thank everyone for their patience during this incident, and apologise for any inconvenience caused".

The Police cordon extended all the way down Gloucester Street after it was discovered that the severe weather overnight had damaged the roof of the hospital’s Granite Block.

Issuing a statement at the time of the incident, a Health Department spokesperson said: “This is due to parts of the waterproofing on the roof of the Granite Block hospital needing to be checked urgently because strong winds overnight have caused parts of the flashing on the granite block of the hospital to loosen.”