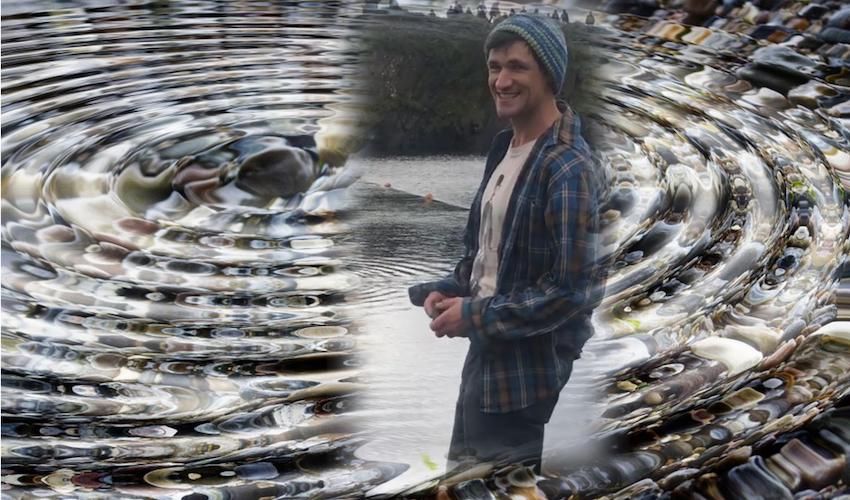 A local composer has swapped stave for slate - and been named one of the top stone skimmers in the world.

Classical composer by day, Charlie Mauleverer has just returned from the international stone-skimming championships on a Scottish island where he skimmed a whopping 60metres, climbing to 15th place at the "eccentric" contest.

Smashing his personal best, Charlie vows that he is “chuffed but not complacent” and will be training hard for next year’s contest.

Express caught up with Charlie to find out how he discovered his talent for skimming stones, as well as getting his top tips for those who want to refine their technique...

“Stone-skimming is something probably everybody in the world has had a go at if they’re anything near water with anything like a flat stone. So, there’s an argument to say that it’s one of the most competitive sports in the world!”

Having grown up in Jersey, Charlie explained that he was very young when he started skimming stones and, as he saw his distances stretch higher and higher, he began to wonder if he could start doing it competitively.

Now an established orchestral composer, it was Charlie's penchant for sports – especially slightly off-the-wall ones – that led him to the World Stone-Skimming Championships on the “beautiful” island of Easdale off the coast of Scotland.

Pictured: The championships took place in Easdale Island off the coast of Scotland. (Charlie Mauleverer)

A former slate quarry, Charlie tells Express, the isle is a dream spot for any stone-skimmer due to the calibre of the stones there.

Selecting your ‘weapon of choice’, Charlie explains, is a crucial part to executing the perfect skim.

Although it’s not set in stone, the composer thinks he’s cracked the formula for success in the sport.

“For me personally, and I’ve been thinking about it a lot, to get your optimum result; it’s roughly 40% to do with the stone – how good your stone is, if it’s the right kind of shape – it’s about 40% technique and the final 20% is strength.

Pictured: Examples of the perfect skimmers which Charlie brought back from Easdale.

“So building up that strength can help with the final push, but if you don’t have the right stone and the right technique it’s still a struggle.”

This year, Charlie was only three metres away from making the final ten, but he is thrilled to have ranked 15th in the world for the emerging sport.

He also took part in the group category with his team ‘Slaters Gonna Slate’ and they came second overall.

Whilst skipping stones is his forte, Charlie certainly doesn’t skip practice – but where is the best place in Jersey to skim?

“I’ve been practicing quite a bit, trying to go every day to find somewhere. There are lots of nice spots in the island, but it is again very weather-dependant because it’s pretty much throwing into the sea.

Climbed the rankings at the world stone-skimming championships this year. Now up to number 15 in the world. Chuffed, but not complacent pic.twitter.com/qqF15RJ4Mo

“Bonne Nuit bay is one of my personal favourites when there aren’t too many boats in there and the tide is relatively high – you can get some great stones out there.”

However, Charlie warns that it’s not always easy to get the best of both worlds.

For example, the stones in St. Ouen’s bay car parks are near perfect, but the waves make skimming impossible. On the other hand, Rozel is a great training ground for budding skimmers, but the stones aren’t up to scratch.

And that’s just skimming the surface of how “tricky” Jersey’s geography can be when preparing for a competition of this scale.

Looking ahead to next year, Charlie is hoping to skim his way into the finals.

“To make the final would be absolutely brilliant. So, I’ve made a lot of progress in the past year and hope to just go to that next step next time – it would be fantastic.”