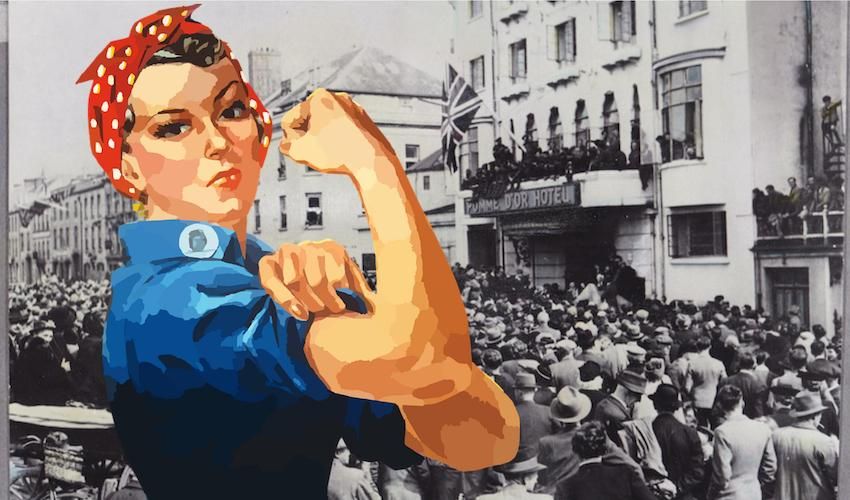 Today's celebrations marking 74 years of freedom from occupying forces are also focusing on another fight for liberation: women's struggle for equality and their crucial role during the war.

From nearly three quarters of a century of being free from the Nazis to 100 years since women were granted suffrage… 2019 marks a significant milestone in Jersey’s heritage and today’s Liberation Day celebrations will acknowledge that fact.

The theme of this year’s celebrations is “the contribution of women” during the Occupation where historical female figures from Jersey will be acknowledged for their bravery.

To mark 100 years since women were given the vote in the island, Jersey Heritage have been running a campaign to raise awareness about some of these female political pioneers. Amongst these figures were sisters Ivy Forster and Louisa Gould who harboured escaped Russian slave workers brought over to the island by Nazi soldiers.

Pictured: Jersey's female political pioneers are being celebrated as part of this year's Liberation Day event.

The sisters were both arrested in May 1944 – just one year before the war ended – but suffered very different fates.

Ivy served a five-and-a-half-month sentence before falling ill and was transported to the Hospital whereupon her doctor swapped samples and forged papers to convince German soldiers that she had tuberculosis and should not travel.

Having served her sentence on-island, Ivy went onto become Jersey’s first ever female Deputy in 1948 as well as being the first woman to top the island polls when she was re-elected in 1951.

Her sister Louisa, however, was not as fortunate. She was sent to Ravensbruck Concentration Camp where she was killed in the gas chambers in February 1945 – just months before the Channel Islands were freed from Occupation.

Pictured: The celebrations will take place in and around Liberation Square.

Today’s schedule for the local Liberation Day celebrations will kick off from around 09:35 in Liberation Square with a performance of war-time songs and instrumental pieces from La Ronde Concert Band and the Jersey Festival Choir. Meanwhile, the Band of the Island of Jersey will be performing in the Royal Square.

The main events in the schedule will be taking place around the following times:

The afternoon will also bring an array of events including a memorial service to remember 101 foreign forced workers of different nationalities who died in Jersey during the Occupation as well as other service men and women who “paid the ultimate sacrifice to free the oppressed.” This will take place at the Crematorium at 15:00 when the Bailiff, Lieutenant-Governor and Chief Minister will lay wreaths in their honour.

Meanwhile, at Liberation Square, there will be a food fair and other artisanal and vintage stalls, a 1940’s vintage afternoon tea, ‘street party’ seating, live performances and broadcasts of archive footage and historic clips on the ‘big screens’ set up in the square.

The auspicious occasion is also being acknowledged on the mainland, with the Ministry of Justice in London flying a Jersey flag at their headquarters to commemorate the island's Liberation Day.