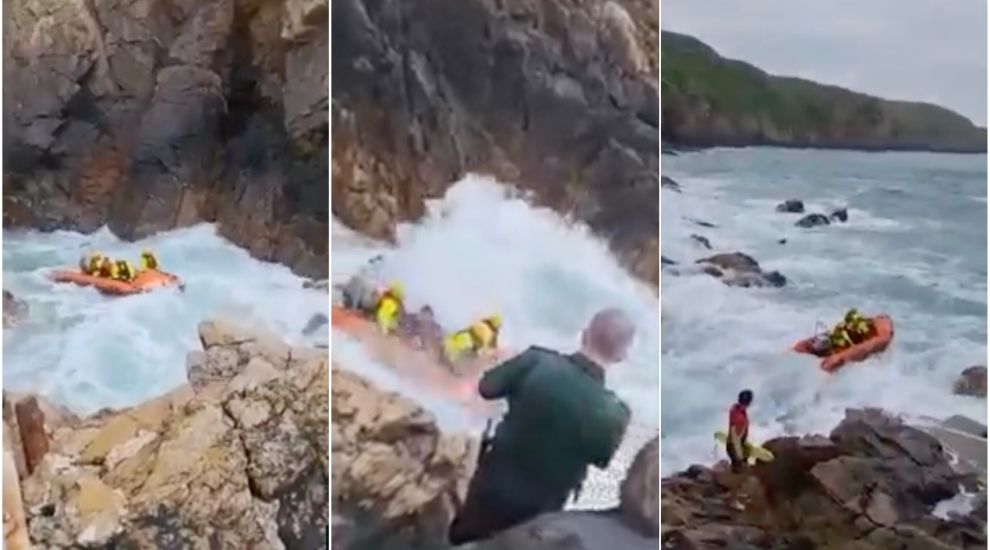 Lifeboat rescuers have been praised as “heroes” after battling through extremely “challenging” conditions to rescue a French couple trapped in a cave at Plemont with a rapidly rising tide.

Nearby café staff raised the alarm after spotting the lady slipping from rocks into the sea in the area, breaking her wrist in the process, with her husband jumping in to save her.

Both were then washed up into the cave.

After an emergency call from Jersey's Coastguard, Jersey Fire and Rescue Service launched its Inshore Lifeboat from Grève de Lecq around 16:30.

Battling what were described as "challenging" conditions, including wind and a two-metre swell, they "steamed around" to Plemont, where the couple were facing a "fast upcoming tide".

Video: The rescuers had to battle "challenging" conditions during the rescue, having launched from Grève de Lecq in a two-metre swell. (JFRS)

Due to poor reception, all communications had to be relayed through Guernsey.

Accessing the couple was not easy – the lifeboat had to undertake a "tricky veering down manoevre, which involves using the anchor and line and powering astern into the narrow cave entrance."

This method, Crew Commander Simon Le Maistre explained, meant they could "keep the bow of the boat facing the waves so the boat does not get swamped with water" and "maintain tension on the anchor line, so we don't get washed on to rocks."

Once holding in position deep in the cave, one of the crew swam in with life jackets, rescuing the couple and bringing them onto the lifeboat.

Finally back on land, the couple who were suffering with exposure and shock had their injuries treated by waiting paramedics.

After a video of the impressive rescue in difficult conditions was shared online, hundreds of islanders have praised the rescuers.

“What an amazing feat of seamanship. Well done to all involved,” added Matthew Robins.

Steve Ball described the team as “real heroes”, while Charlie Gouyet praised them as “so brave”.