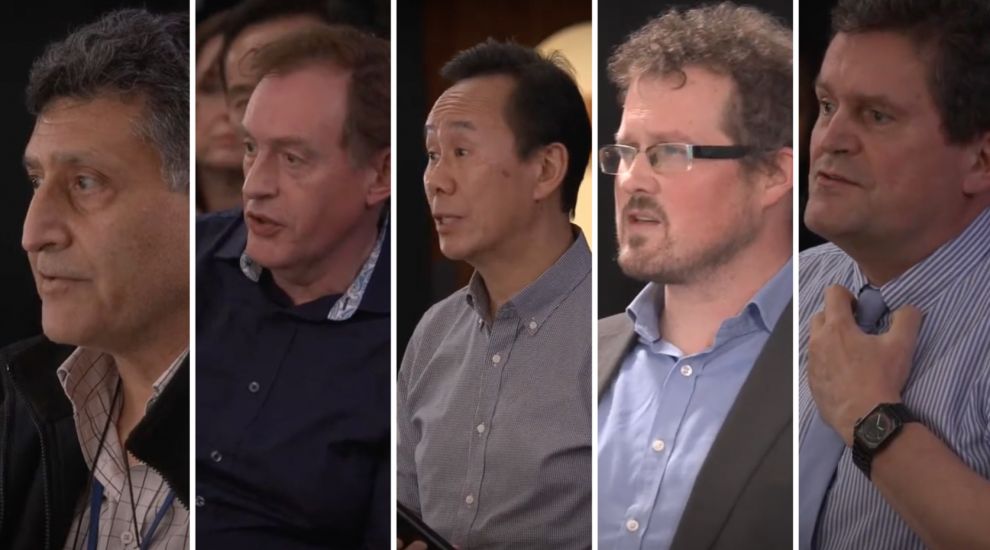 The potential scale of the challenge for the Government to get the medical profession behind its plan for multiple hospitals was laid bare at last night’s live-streamed Q&A event.

Clinicians formed part of a 50-strong audience for the panel session with the Chief Minister, Treasury Minister, Health Minister and Infrastructure Minister.

Using the hospital project as a "political football", a lack of consultation and future-proofing were among the concerns raised by doctors at the event, which followed a review carried out by Infrastructure Minister Tom Binet along with an Expert Adviser appointed from the UK.

"Will Ministers stop using the hospital and staff as a political football?"

Consultant gastroenterologist David Ng was among those to speak, warning of the unintended consequences of reopening some facilities at Overdale, which he said had taken physiotherapists out of the General Hospital, adversely affected patient discharge times, leading to bed-blocking and cancelled procedures.

Dr Ng added: "Will Ministers stop using the hospital and staff as a political football and continue with the democratically-agreed plan [to build at Overdale] without delay?'
Treasury Minister Ian Gorst said that economic circumstances made the existing Overdale scheme unaffordable and that continuing with it would have involved gambling with taxpayers' money.

Consultant urologist Ben Hughes asked Health Minister Karen Wilson how many Jersey-based doctors had been consulted for the review.

He queried the value of involving UK-based experts, notably the notably author of the review Alan Moore, describing the UK's National Health Service as being "in disarray".

Deputy Wilson said she did not have exact details about the consultation, but pledged to provide these.

Another consultant, colorectal specialist Miklos Kassai, questioned whether the government's preferred option from the review - a multi-site hospital including Overdale and the current Gloucester Street site, among others - could be adapted in the future.

Infrastructure Minister Tom Binet said he believed that previous schemes had attempted to fit too much into each site, and that the multi-site scheme would provide space allowing facilities to develop.

Dr Salman Zaman, a consultant who is also the director of medical education for the Health Department, said he was proud of Jersey's reputation as a training centre for clinical staff and said the island should aspire to "competing on the world stage".

Dr Zaman asked the Health Minister if she would pledge that education and training would not be a casualty of the government's review into the Hospital and the intention to cut costs.

Deputy Wilson said: "It is one of the key areas that it's important to address and through this two-site proposal we have really got to examine how we protect the capability to provide really good training facilities for people - that would certainly be my commitment to continue to develop that going forward. The issue is again how we manage to get an affordable solution to that - that would be something I would want to work with yourselves [clinicians] on."

Delivering a new building... and a better system

Hospital clinician Chris Edmond, who also runs an occupational health business, asked the Health Minister when the results of work to get the model for healthcare provision in Jersey sorted would be seen.

Deputy Wilson said this would happen once there was a decision on the Hospital from the States Assembly, adding: "We will never achieve what we want to achieve just by building a building, what we are trying to achieve is a healthcare system that delivers really good clinical outcomes, so the earlier we start the design of that - which is the critical part - with the clinicians and patients around that, and I know I keep repeating that, but it is absolutely critical to the way in which we need to move forward.

"There have been some previous criticisms about the kind of engagement that's gone on before but now we've got a chance to put this right and be really clear about what we can do together to deliver a really good model of service going forward."

A nurse working at the hospital referred to guidelines from the National Institute for Health and Care Excellence about the potential harm caused to elderly patients, including those with dementia, of prolonged stays in hospital and being moved from ward to ward.

This was a particular concern, she said, as quarter of the patients at the General Hospital fell into this category.

Deputy Wilson said that it was important to build facilities that would meet the needs of people with dementia, and that a dementia strategy was being developed. She said that she would have "a particular focus" on making sure patient safety was addressed throughout the process of redesigning services.

Posted by Stathia Ekdikisi on Nov 16th, 2022
It is interesting how few of the respected doctors engage in the political/ economic discussion trying to overturn the result of the democratic process which quite recently gave a strong mandate to politicians opposing the huge, super-expensive hospital to be built on perhaps most inaccessible site in Jersey. There is no objective proof of patient outcomes suffering in the hospitals with multiple sites. The duplication can be kept to the minimum, no service will be split into two or more sites I assume. There are few examples of super hospitals conceived in the UK in the last decade which got vastly delayed and the original budgets got inflated by 40% or more. Think of Sandwell West Midlands super hospital originally scheduled to be completed in 2018 now due to be opened in 2024. The cost increased to £998M for state of the art 700 bed hospital. How many beds did we want to fund with £805M? Cost per bed is a universally recognised benchmark for new hospital projects. There is however, lots of evidence that lack of resources does negatively impact patient outcomes. What if the few doctors manage to convince everyone back to the Overdale idea, what if we learn half way that the cost would increase to say 1.2B (plus interest of course). Will we have money to attract good doctors and nurses? Will we be able to pay for a modern medical technologies, for innovative drugs? None of the respected doctors seemed to consider such contingency plan and its consequences.
Posted by IanSmith97 on Nov 16th, 2022
Couldn’t organise a stag night in a brewery. Amateur politicians, playing at being serious parliamentarians, over-riding the (1) already democratically arrived at decision to build at Overdale (2) more worryingly, ignoring those who provide and will provide the healthcare to us i.e. the health professionals and eminent ones at that. This whole fiasco is a stain on the governance of this island. £115 MILLION and counting, and not a sod of grass turned over or dug. My wife spent the day in the hospital yesterday, she says it is a disgrace (well the part she was in).
Posted by Keith Marsh on Nov 17th, 2022
Yet again the Chief Minister wants everyone to agree with her, that Overdale is not possible.
The problem is she and her advisors have not produced a full and proper way forward. No plans, No agreed sites, No Costings, No time scale.
Overdale has been agreed by The States Assembly, and Jersey has spent £millions getting this far,
STOP messing about and BUILD IT.
Posted by EdWilliams4 on Nov 17th, 2022
I feel sorry for the experience of the lady who spent a day in the old hospital. Yet I don’t think it justifies spending of £800M or rather in excess of £1B on the super hospital with the view. We can ensure modern facilities with lower price tag. It is a beauty of democracy that people can elect a new parliament, new government or president who can overturn past decisions if the situation changes. The previous crew of politicians had not been elected with clear mandate to spend £800M or more on a super hospital. The new government has been elected with full clarity about their concerns over the recently rushed decisions of their predecessors. We all have areas of expertise, I would feel bad if Deputy Gorst had been loud in publicly challenging medical decisions of one of the consultants. I feel bad if it happens the other way too.
To place a comment please login Login »