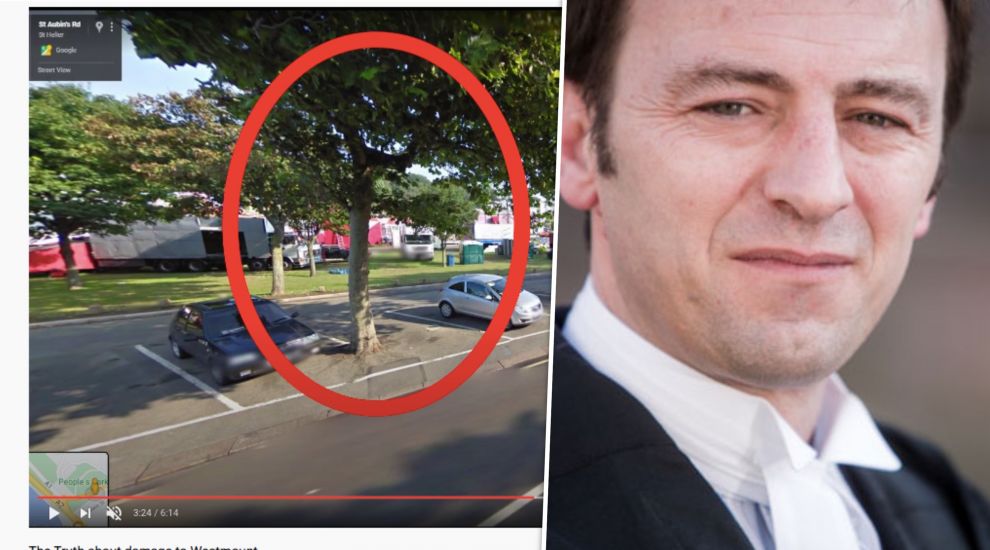 A local lawyer’s ‘fact check’ video on claims by the Deputy Chief Minister about the proposed hospital highway has racked up more than 2,400 views in less than 24 hours.

The video by Advocate Olaf Blakeley – the spokesperson for residents of the Westmount area – came in response to claims from Senator Lyndon Farnham on Friday that “misinformation” had spread about the Westmount widening project.

Hitting back at ribbon-tying campaigners’ claims that trees and green space could be lost as the road is widened, he said that “the intention is not to lose a single tree” and that there was, in fact, an “opportunity to increase the recreational space on the other side of the road and actually grow the park.”

According to Senator Farnham, out of the 71 access options considered by the hospital project group, the one with the minimum environmental impact had been chosen.

The project team also warned that, if politicians vote against the overall plan today or decide to support an amendment by Scrutiny calling for politicians to have the final say on detailed design proposals, then the project could be delayed by as many as 15 months. In addition, they said that building contracts could be threatened and costs could potentially rise by as much as 30%.

But in his video, Advocate Blakeley suggested Senator Farnham was himself guilty of spreading ‘fake news’, pointing to report stating that the chosen option would involve losing 2,355m2 of tree cover.

He goes on to point out that by simply overlaying one of the few diagrams Government has provided over a map of the site or by taking a simple walk around the area, “You can immediately see that it’s impossible for this road network to be built without destroying trees.”

Picking yet another hole in the quality of information provided by Government on the highway proposal, Advocate Blakeley notes that an image showing which areas need to be compulsorily purchased to make the access proposal viable includes land that they already own.

“Even the information provided is misleading. St. Aubin’s Road is already in public ownership. The Council of Ministers can’t even colour in a picture properly. The Government doesn’t have to compulsorily purchase this area of road because it already owns it. That just demonstrates how unreliable the information provided really is. Quite frankly, it’s embarrassing,” he states.

Addressing Senator Farnham’s previous argument that more detailed plans won’t be provided until States Members have agreed the route in order to save money, Advocate Blakeley comments: “Whilst at first blush that may seem a sensible approach, it’s contradictory to the fact that, for weeks, engineers have been carrying out test drilling along the length of Westmount

“So, whilst the Council of Ministers are happy to spend money on topographical and geotechnical surveys, they’re not willing to spend the money on very simple diagrams in order to inform the public as to what is proposed for the road network.”

He concludes by noting: “For what is going to be the biggest building project Jersey has ever undertaken, there has been a distinct lack of information provided to the public of the island.

“At a time when many businesses are on their knees financially, members of the States owe a duty to the public of the island not to squander its money and instead demand a proper and informed debate on the access proposition.”

Since posting the video to YouTube on Sunday morning, the video has been viewed more than 2,400 times, and shared widely on social media.

It’s not the only way in which Advocate Blakeley has sought to challenge the highway plan.

On Friday morning, he announced that a requête - an centuries-old way of forcing a Parish Assembly - was being signed and would soon be served on the Constable of St. Helier to ensure any purchases of Parish land cannot go through until more information about the proposed access route to the new hospital is received. 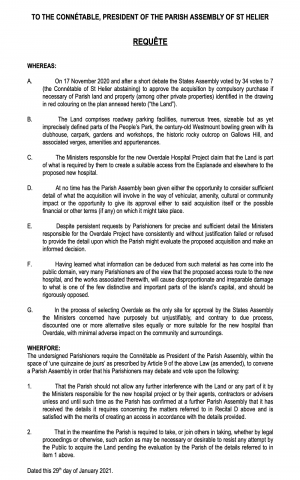 Posted by gordon le claire on Feb 1st, 2021
The ministers always get their way as its what they want and do not really care of the public opinion
Posted by Private Individual on Feb 1st, 2021
Well said, a clear precise explanation of the report.

Excellent presentation with the facts.
To place a comment please login Login »