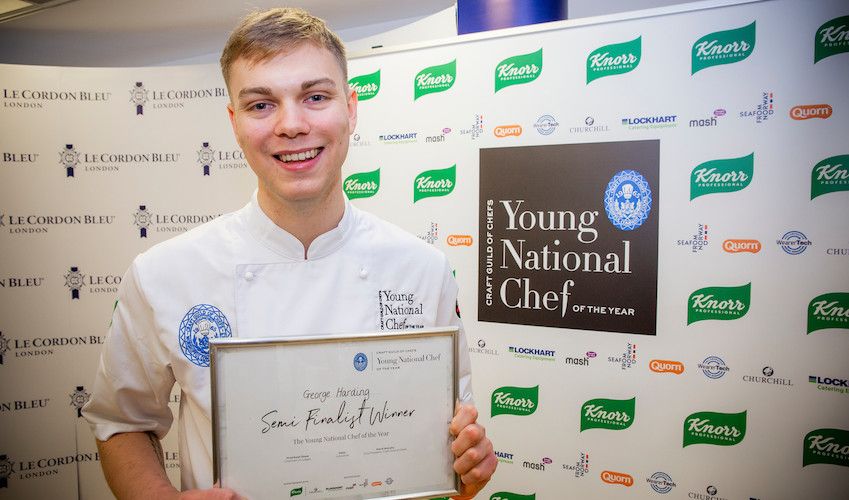 A budding Jersey chef has cooked his way up to secure a place amongst the nation’s top ten talents battling it out in the prestigious championship final of ‘Young National Chef of the Year'.

George Harding – the recently recruited Chef de Partie at the Atlantic Hotel – has served up success in the competition so far by winning his semi-final heat at Le Cordon Bleu.

His victory has earned him a place in the eminent contest’s finals where the nation’s top ten cooking talents will battle it out for the winning title.

He was selected for the competition - which challenges chefs to incorporate current trends and techniques to enhances their dishes - after triumphing in a string of qualifying contests.

Pictured: George has earned a coveted spot in the competition's final.

The semi-final challenged the young chefs to produce a seasonal main course using whole corn fed, free range chicken, a minimum of two appropriate garnishes (one must be a green vegetable) and an appropriate starch preparation.

The judges were looking for a good understanding of basic craft skills, flavour, and the execution of finished dishes, as well as butchery skills, perfect garnishes and correct balance and flavour.

Each participant was also asked to create a classic lemon tart “with a twist” which shows their own personal interpretation of the brief. This challenge focused on the perfect pastry, an excellent filling and clean flavour.

Video: George speaks about taking part in the prestigious contest.

George wasn’t the only Jersey talent showcasing his skills in this semi-final heat, as he was joined by Jacob Gosselin – a student chef at Longueville Manor, who was described as head chef Andrew Baird as "destined for great things."

Speaking to the competition about what inspired him to become a chef, Jacob said: “My parents love to travel so from a young age I have been fortunate enough to travel to most parts of the world. Seeing the different types of cuisine around the world has really influenced my career choice.

“My inspiration to become a chef came from my early youth, when watching other chefs and getting involved in my family BBQs.”

The final round of the competition will see George going head to head with nine other emerging chefs in a high-pressure test of their skills at the Restaurant Show in London on 1 October.

Pictured: George was recently appointed as Chef de Partie at the Atlantic Hotel.

Of George’s success, Patrick Burke, Owner and Managing Director of The Atlantic Hotel said: “It is difficult to overstate George’s achievement in winning the London semi-final of the National Young Chef of the Year competition. He was up against some very talented young chefs from some of the top hotels in the country and I believe that his success speaks volumes for the quality of gastronomy on the island today.

"We are immensely proud of George and will be supporting him all the way to the final in October.”

PROFILE: "I come to work with joy in my heart"